Seems like it's been a while since we've had a good cryptozoological report, so it's with great pleasure that I bring you news of a sea serpent invading Thailand.  [Source]

At least that's what they're claiming.  On the morning of December 15, workers at the school on Koh Mai Pai (Bamboo Island), near Phuket, arrived to find what appeared to be a line of tracks that came from the direction of the ocean, meandered its way through the school grounds, and then returned from whence it came.  The "tracks" were circles, twenty centimeters in diameter, leading one school official to speculate that they were made by a "sea serpent fifteen meters in length." 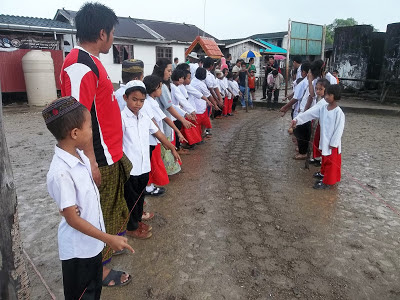 Koh Mai Pai village chief Anan Sansamuth stated that at 11 PM the previous evening, he had heard some "ducks quacking frantically," but had thought nothing of it until he saw the tracks.  He is now recommending that the village's electricity generator be run all night, and that villagers "prepare implements to catch the creature."

What implements might be handy to catch a fifteen-meter-long sea serpent were not specified.

Of course, there's no weird story that can't be made even crazier, and it was Koh Mai Pai teacher Mrs. Pannee Atwaree who added that extra-special nutty sauce to this seafood dish.  "The islanders’ fear is ratcheted up by theories that the appearance of the tracks might be an omen of a great disaster," Mrs. Atwaree said.  "Perhaps the one some have been predicting for next Friday (December 21) when the Mayan calendar – and possibly the world – comes to an end."

Because, after all, that's what the Mayan calendar predicts, right?  When the Great Cycle ends, sea serpents will visit schools in Thailand and do nothing except scare a bunch of ducks.  That's how awful this apocalypse will be.  What will it be next time?  Alarming some goats?  You can see how quickly this sort of thing could escalate.

In any case, there are several problems with this story.  The first is that I've never seen any animal tracks that look even remotely like the alleged Thai sea serpent tracks.  They're far too regular, too clear in outline, and show no signs of the blurring you'd expect if a fifteen-meter-long (and presumably extremely heavy) animal were dragging itself across the sand.  Plus, they're kind of closely spaced, don't you think?  I'm trying to picture a gigantic sea serpent, sort of mincing delicately along on its perfectly circular feet, and the image is strangely hilarious.

So, unfortunately, this whole thing just screams "hoax."  What I think is that some prankster made these tracks, using something circular to press into the sand (the bottom of a large bucket looks just about the right size).  Along the way, he freaked out some ducks.  And there you are.  No need to get out your sea-serpent-catching implements, no need to run the generator all night, and especially no need to invoke the Mayan calendar.  What with the various groups of apocalyptoids descending on mountains in France, Serbia, and (most recently) Argentina, each hoping to be the lucky ones that the returning aliens decide to save, the last thing we need is folks rushing off to some beautiful island off the coast of Thailand trying to catch the Stumpy-Legged Sea Serpent of Doom.
Posted by Gordon Bonnet at 2:17 AM