One of the main differences between skeptics and woo-woos is what we each think to be "sufficient evidence."

I ran into a great example of this yesterday, on S8intCom Blogger, which bills itself as "A Biblical View On Science."  (You are told on the homepage that "s8int" is pronounced "saint;" but by my linguistic analysis, "s8int" would be pronounced "satan-t," which is probably why they felt that the reader should be advised on how to pronounce it.)  In any case, most of the site is devoted to "proving" that the Great Flood of Noah happened, as per the Book of Genesis, that the Earth is 6,000 years old, that evolution is a big fat lie, and so on.  But one page struck me as especially interesting.  It was entitled "Ancient Viking Brachiosaurus," and makes the claim that the early inhabitants of Scandinavia depicted dinosaurs on their art -- because, well, real dinosaurs existed during the Viking age.

As evidence, they produce photographs of artifacts like this one, next to which they have helpfully superimposed a photograph of a brachiosaur skull and an artist's rendition of a brachiosaur, to make sure that you don't miss the similarity: 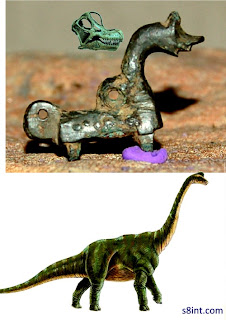 They also bring up the mention in Norse myth of giant serpents, like Ni∂hogg, the dragon who spent his time gnawing on the "World-Tree" Yggdrasil, and Jörmungandr, or "Midgard's serpent," the giant serpent that lay underwater, coiled around Midgard ("Middle-Earth," or the home of humans).  And this, we are told, is sufficient evidence to buy that dinosaurs were contemporaneous with humanity.

Okay, where do I start?

Let's begin with the artifact itself.  Even the S8intCom people admit that it hasn't been authenticated as being of genuine Viking make; in fact, they got the photograph of it from eBay, where it is being sold for $140 by some guy from Latvia.  Now, understand, it might be authentic; I'm not saying I have any reason to believe it isn't.  And questioning the artifact's provenance is only the beginning of the problems here.

A more serious problem is that dinosaurs of the genus Brachiosaurus are only known to come from the Morrison Formation, which is a Jurassic Age sedimentary rock formation... from western North America.  There were related forms, including Diplodocus, Apatosaurus, Camarosaurus, and others --  but the various long-necked sauropods seem to have been largely a group confined to what is now the western United States.  (There is some evidence from the fossil record that similar species may have occurred in North Africa, but that is uncertain.)  In any case, what's pretty clear is that at no time in the past did Brachiosaurus and his cousins stomp their way around Scandinavia.

Well, the Vikings were great travelers, right?  Maybe they saw live brachiosaurs on their travels, and were impressed (who wouldn't be?), and depicted them in their art.  Okay, but the problem is, they also depicted other things, like trolls, multi-headed giants, flying horses with eight legs, guys with magic hammers, hundred-foot-tall wolves, and boars made of gold that can run through the air.  And as far as I can see, S8intCom isn't claiming any of that is true.  They pick the one thing from Norse myth and art that supports their claim -- that dinosaurs coexisted with humans -- and conveniently ignore the rest.

We also have the additional problem that the two actual examples of dinosaur-like creatures mentioned in Norse myth -- Ni∂hogg and Jörmungandr -- aren't, really, all that dinosaur-like.  Ni∂hogg, in fact, lived underground, but liked visitors -- and he could talk, spending his time in riddles and abstruse arguments with any who would listen.  (Tolkien's talking dragons Smaug and Glaurung were almost certainly inspired by Ni∂hogg.)  As for Jörmungandr, he was thousands of miles long, and lived underwater, and was the offspring of the god Loki and the giantess Angrbo∂a.  Neither one of these sounds like any dinosaur I've ever heard of.

Last, if the dinosaurs were contemporaneous with the Vikings, why haven't we found any bones?  Or teeth?  Or anything?  There are animal remains that date from that age -- some that have been mummified, or partially fossilized (full fossilization usually takes longer than 1,000 years), and others that have had their bones or teeth fashioned into things like knife handles, jewelry, and the like.  Why no 1,000 year old dinosaur parts?

What I find most maddening about this whole thing is that the writers at S8intCom want to take a tiny part of scientific research -- the actual dinosaur bones themselves -- and an equally tiny part of antiquarian research into the art and myth of ancient Scandinavia, and effectively jettison the rest in favor of their own favorite Bronze Age mythological explanation of the world.  The rest of science -- that the Earth is a billion years old, that the dinosaurs (with the exception of the lineage that led to birds) died out during the Cretaceous Extinction 65 million years ago, that evolution is correct as per the evidence -- they ignore or argue away.  The depiction of things like flying horses and hundred-headed frost giants is considered the fanciful ravings of ignorant pagans, but a piece of dinosaur-like Norse jewelry is a valuable find that could overturn everything we understand about paleontology.  They're perfectly willing to take 1% of the evidence, and use it to support the ridiculous ideas they already had, and ignore the other 99% as misleading or downright wrong.

Now, don't get me wrong.  I'd just love it if the Norse myths were true.  They've always been my favorites, even if they take kind of a harsh view of the universe, what with the man-eating wolves and evil jotuns and fierce Valkyries, and the world getting destroyed at Ragnarokk, and all.  But at least they're better than the biblical myths, with an all-powerful, but petulant and capricious, god basically smiting the crap out of everyone for such egregious offenses as collecting firewood on the sabbath or eating shrimp or wearing clothes made of two different kinds of thread.  Given the choice, I'd take my chances with Odin and Loki and Thor.
Posted by Gordon Bonnet at 5:57 AM