And now, for an inspirational message from the Church of Satan...

New from the "Be Careful What You Wish For" department, Florida governor Rick Scott is currently trying to figure out what to do about a rally in favor of his policies scheduled for Friday, January 25...

Now, don't misunderstand.  Scott isn't a Satanist himself; far from it.  He's a staunch conservative Republican and an evangelical Christian.  In fact, it's pretty certain that sneaking Christianity back into public schools was his motivation for signing into Florida state law a bill that would give local school boards the power to authorize "inspirational messages" during school functions -- even if those messages were explicitly religious in nature.  Supporters crowed that this was the first step toward their ultimate goal: reintroducing daily prayer into public school classrooms.

Well, the Christians, as it turned out, weren't the only ones who were happy about this.

Neil Bricke, spokesperson for the Florida-based Satanic Temple of America, thinks that the bill (SB98) is an awesome idea.  In a statement released yesterday, Bricke said of Scott's policies, "The Satanic Temple embraces the free expression of religion, and Satanists are happy to show their support of Rick Scott who -- particularly with SB 98 -- has reaffirmed our American freedom to practice our faith openly, allowing our Satanic children the freedom to pray in school."

Bricke also announced that he and his fellow Satanists are planning a rally in favor of Scott on the 25th.

Well, to quote the Church Lady, isn't that special.

I'm not entirely sure how to think about this.  I mean, I'm not a theist, but I don't believe in Satan, either.  If you go to the Satanic Temple's website, you will find the following statement of belief:


The Satanic Temple believes that God is supernatural and thus outside of the sphere of the physical. God’s perfection means that he cannot interact with the imperfect corporeal realm. Because God cannot intervene in the material world, He created Satan to preside over the universe as His proxy. Satan has the compassion and wisdom of an angel. Although Satan is subordinate to God, he is mankind’s only conduit to the dominion beyond the physical. In addition, only Satan can hear our prayers and only Satan can respond. While God is beyond human comprehension, Satan desires to be known and knowable. Only in this way can there be justice and can life have meaning.
Hail Satan!

So it's not like I can exactly say, "Right!  Exactly!  You go give Governor Scott what-for!" to them, either.  In fact, when I look at websites like this one, and also the home page of the "Church of Satan," mainly what I think is, "You people are just as loony as the evangelical Christians."

I guess, in the long run, though, it's a good thing that Bricke et al. are doing this.  Because it might remind conservative Christians in Florida and elsewhere why we have separation of church and state in the first place. 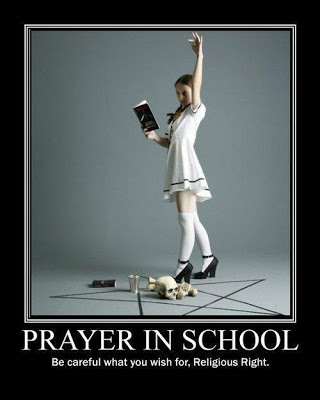 The whole point is that there is no place in public schools for people to ramrod religious belief down students' throats, and that doesn't just apply to religious beliefs you happen to disagree with.

In any case, it will be interesting to see how political and religious leaders in Florida respond to the whole thing.  Rick Scott has spoken cautiously in public -- although I'll bet he has had a few choice words to say in private.  "This is a great country," Scott's press secretary wrote in a press release.  "Everyone has a voice."

Yup.  I'm sure that Governor Scott is just thrilled that this happened.  Being an evangelical Christian himself, he must be tickled pink to find himself garnering the support of members of the Church of Satan.

So keep your eye on Florida next week.  Maybe other groups will turn up.  Maybe we'll have believers in the Norse myths, out there invoking Thor and Loki and all.  Maybe some Mayans will show up and call for the Second Coming of Quetzalcoatl.  They might even get a few Pastafarians.