Whenever I think the conspiracy theorists of the world have reached an all-time low, and can go no lower, they surprise me by getting out the shovels.

Of course, it's hard to beat the "9/11 is an inside job" thing.  Believe me, I'm no apologist for much of what our government does, but the idea that government operatives would bomb the World Trade Center, costing over a thousand lives, in order to provide false pretenses for entering a war against Iraq, is absurd and reprehensible.  And of course, you have the ongoing chemtrails foolishness, blaming the government (acting through HAARP, or some chemical additive to jet fuel, or both) for Hurricane Katrina and Hurricane Sandy -- as if nature by itself isn't good enough at cooking up disastrous storms.

But now we have a new nadir.  The contention:  the Sandy Hook massacre never happened.  No children were killed.  The grieving parents and horrified first-responders were actors.  The whole thing was set up by the government...

... to give momentum for overturning the Second Amendment.

Don't believe me?  Go here if you can stand to, where you can watch a video explaining the whole thing (I got through about five minutes of it before nausea forced me to shut it off).  Otherwise, perhaps a photograph will suffice: 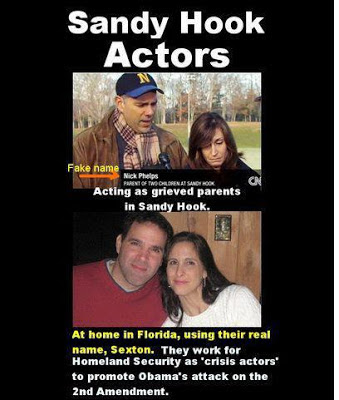 The whole thing is thoroughly debunked in this link at Snopes; but that won't stop the conspiracy nuts, of course.  These are the same people who think that Theodore Roosevelt's son, Kermit Roosevelt, was an actor who played the part of Adolf Hitler during World War II (in this mythical version of world history, no Jews were killed in concentration camps), and was spirited away by American CIA agents after the war was over, and spent the rest of his life as... Walt Disney.

So it's not like any amount of evidence is going to convince these people.  They have long since abandoned any respect for actual evidence, logic, and rationality for their own warped view of humanity.

You know, despite my poking fun at irrational beliefs, I really do try to be tolerant.  I do the best I can to understand people whose views differ from my own, and not just to be an arrogant asshole.  I really, honestly believe that everyone has a right to his/her own opinions, as long as those opinions don't include forcing me to believe differently than I do.

I might make an exception in the case of these folks, however.  It is my considered stance that these folks are badly in need of a punch in the jaw.  If they really think that anyone, anyone has the right to demean what the parents, friends, and community of the victims of the Sandy Hook killings went through (and are still going through), in order to promote their own ridiculous, counterfactual worldview -- well, all I can say is that they're wrong.  And somehow they should be forced to take down that website, and after that, vanish into the obscurity that they so richly deserve.
Posted by Gordon Bonnet at 2:11 AM