A few days ago I made a statement that believing in the various end-of-the-world predictions was about as foolish as thinking that we're in danger of being attacked by Giant Space Bunnies.  So imagine my surprise when the following photograph came in from the Mars rover Curiosity: 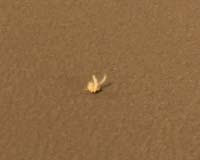 I wasn't the only one who had that reaction; the woo-woo websites were lighting up like Christmas trees with posts speculating that extraterrestrial life had been found at last, and that we were looking at a Martian Space Bunny.  "Of course," one of the sites hinted darkly, "pretty quick the scientists will cook up a 'scientific explanation' of the whole thing and sweep it under the rug.  No way will they admit that they've discovered life on Mars."

Because, you know, scientists just loathe new, groundbreaking discoveries.  The whole purpose of the Mars rover was to confirm how boring and ordinary Mars is.  It'd really suck if they discovered anything interesting up there, something worth studying.  Scientists hate that.

But even so, I had to admit that the likelihood of it actually being a bunny was pretty small.  Whatever any possible Martian life might look like, it's unlikely to resemble our terrestrial forms.  So I figured, like our abovementioned conspiracy theorist, that the Space Bunny would be explained in short order, and wasn't going to turn out to be Bugs' distant cousin.

And sure enough.  As described in an article in the website of the National Paranormal Association (and despite their name, they're pretty careful to maintain a skeptical outlook on things), the scientists noticed some odd things about the Martian Bunny.  The first was that despite the fact that the air on Mars is extremely thin, and the wind was fairly calm that day, the Bunny was moving gradually across the ground.  In the time they observed it, it moved five or six meters, without leaving a mark on the ground.  "There's no evidence of a mark that it left in the soil as it moved," Jeff Johnson, a member of the camera team, stated.  "It was light enough and small enough to not leave any ‘footprints'."

Curious, however, the rover team posted a "bunny watch" to keep an eye on the object; and it was Johnson who finally came up with a consistent, plausible explanation.  He examined the spectrum of light reflected from the object's surface, and found that it matched exactly the spectrum of light reflected from the material that composed the rover's airbag, that was deployed as it descended toward the surface.  So it seems like what we have here is of decidedly terrestrial origin -- a vaguely bunny-shaped scrap of airbag material.

So, there you are.  The search continues.  But I'm very impressed at how this was solved -- using science, logic, and skepticism.  The caution that the Curiosity team showed, in not leaping to the conclusion that this object was what it looked like, is what separates science from woo-woo.  And it's why, given the choice, I trust the scientists.  They're generally pretty good at telling fact from fiction, and airbag cloth from a Martian Space Bunny.
Posted by Gordon Bonnet at 4:36 AM