Sense and nonsense about GMOs

Please allow me to start today's post with a brief genetics lesson.

There is a feature of the genetic code called universality.  Put simply, universality means that all organisms on Earth read DNA the same way.  DNA is made up of strings of nucleotides, and there are four kinds, represented by the letters A, C, G, and T.  The order of those four nucleotides spells out the genetic message, and allows DNA to act as a set of instructions for building proteins and guiding development.  And the language -- how the order is translated -- is identical, for every living thing.

Besides being a fairly powerful argument for common ancestry -- why would we all speak the same genetic language if we weren't all related? -- this has opened the door for genetic engineering.  Take a gene (a set of instructions from one organism) and insert it into another organism's DNA, and the recipient will read that gene the same way the donor did, and produce the same gene product.  It's how we now have human insulin produced from genetically modified bacteria; it's how scientists have created "golden rice," that stores vitamin A in its seeds; it's how goats were generated that express spider silk proteins in their milk.  It's also how, by transferring a gene for a fluorescent protein from jellyfish into the embryo of a cat, scientists created Glow Kitties: 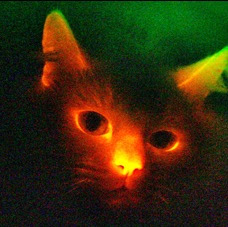 The application to agriculture was obvious.  Once the technique was perfected, within short order we had bt corn and tomatoes (the crops produce a substance in the leaves that is toxic to caterpillars, reducing the amount of pesticides that need to be used); "RoundUp-Ready" soybeans, wheat, and barley (the crop plants are resistant to the herbicide RoundUp, allowing the use of that chemical on fields, reducing the labor from weeding and increasing crop yields); disease-resistant papayas, plums, cucumbers, potatoes, and squash; tomatoes with a significantly increased shelf life; and freeze-resistant strawberries.

Then the alarmists began to chime in.  GMOs (genetically-modified organisms) were dangerous, they said; GMO crops generated food that was unsafe for human consumption.  A (hoax) story began to circulate that a "scientific experiment" had been done, feeding chickens exclusively GMO corn, and "26 out of 33 of them died, and the survivors were stunted and unhealthy."  Critics claimed that companies like Monsanto, that had spearheaded GMO research, were lying to consumers about product safety.  This led to a widespread banning of GMOs in the EU, most of Africa, and elsewhere, and a powerful grassroots movement is demanding that world governments outlaw GMOs and genetic transfer research entirely.

Now, despite the fact that there is no possible way that all GMOs could have the same (negative) health effect -- by what possible mechanism could rice that makes vitamin A and a virus-resistant cucumber generate similar side effects? -- people lumped together all GMOs in their minds.  The whole thing isn't "natural."  And since natural, of course, equals good, GMOs equal bad.

No one was more virulent in fostering this viewpoint than Mark Lynas, who was one of the first people to rail against GMOs as toxic and dangerous.  But now -- miracle of miracles -- Mark Lynas has issued a public retraction of his original stance at the Oxford Farming Conference.  Why?

Here's a brief excerpt from his 5,000-word statement (but you should definitely read the whole thing):

I want to start with some apologies. For the record, here and upfront, I apologise for having spent several years ripping up GM crops. I am also sorry that I helped to start the anti-GM movement back in the mid 1990s, and that I thereby assisted in demonising an important technological option which can be used to benefit the environment.

As an environmentalist, and someone who believes that everyone in this world has a right to a healthy and nutritious diet of their choosing, I could not have chosen a more counter-productive path. I now regret it completely.

So I guess you’ll be wondering—what happened between 1995 and now that made me not only change my mind but come here and admit it? Well, the answer is fairly simple: I discovered science, and in the process I hope I became a better environmentalist.

He then goes on to describe how putting all GMOs in the same category is illogical; as each transferred gene does something different, it's impossible for them all to have the same effects, and therefore the safety of each new crop has to be weighed independently, just as we do with everything else.  Furthermore, the vast majority of them, as evaluated by careful, peer-reviewed science, are safe and beneficial, but that hasn't stopped alarmists from swaying governmental policy:


Thus desperately-needed agricultural innovation is being strangled by a suffocating avalanche of regulations which are not based on any rational scientific assessment of risk. The risk today is not that anyone will be harmed by GM food, but that millions will be harmed by not having enough food, because a vocal minority of people in rich countries want their meals to be what they consider natural...

So I challenge all of you today to question your beliefs in this area and to see whether they stand up to rational examination. Always ask for evidence, as the campaigning group Sense About Science advises, and make sure you go beyond the self-referential reports of campaigning NGOs.

All in all, it's a remarkable turnaround.  Finally, we have someone talking what is just plain common sense -- not trumpeting childish scare-tactics like labeling GMOs "Frankenfoods."  And his position is backed up by mountains of evidence-based science, not just urban legends and the naturalistic fallacy.

Of course, Lynas is pretty likely to be labeled as a shill.  I'll bet that before the words were even out of his mouth, someone had shouted, "How much did Monsanto pay you to say all that?"  As we've seen over and over in Skeptophilia, you just can't convince some people, not with volumes of carefully-researched data and the most flawless argument.  But the fact that someone like Lynas changed his mind -- and was willing to issue a public apology and a statement to that effect -- gives me hope.  Because, as he says, if we don't get smart about how we do it, and use the technology and resources we have, feeding all seven billion humans is going to be an increasingly impossible task to accomplish.
Posted by Gordon Bonnet at 2:33 AM