The attractiveness of cults

One of my failings is my inability to comprehend how people can find themselves still being suckered in by ideologies that are obviously, demonstrably false.  Now, mind you, I get why people stick with what they were taught as children; if you grew up being told, for example, that the world is 6,000-odd years old, and that people are bad because the first woman on Earth got tricked into eating a piece of fruit by a talking snake, and that (furthermore) the talking snake is still around trying to trick you, too, it's unsurprising that you wouldn't listen to the likes of me.

What is completely incomprehensible to me, though, is how anyone from outside the system, who had seen other ways of thinking, would look at something like that and say, "Wow!  Now that makes intrinsic sense!"  Yet I know two former students, both extremely bright young men, who did exactly that, rejecting science and logic and rationality for biblical literalism.

My incomprehension, though, turns to incredulity when I see people voluntarily espousing ideologies that are not just flat-out wrong, but destructive, abusive, and (frankly) scary.  Cults, in other words.  And here I am, of course, referring to the Church of Scientology.

I've long avoided mentioning Scientology in this blog, largely because I'd rather not have Tom Cruise show up at my house and start jumping on my sofa.  For another thing, the hopeful part of me keeps assuming that this cult has to be on the way out, what with all of the bad press it's gotten the last few years -- more than one exposé by investigative reporters, not to mention the whole kerfuffle over the anti-Scientology episode of South Park.  (You might remember that the episode "Trapped in a Closet" resulted in Isaac Hayes, who voiced the character Chef, leaving South Park in protest, and Tom Cruise threatening Viacom that if they didn't pull the episode, he would withdraw from the cast of Mission Impossible III.  Viacom caved, and cancelled a rebroadcast of the episode; and Cruise, satisfied, went ahead with the movie, which went on to net a total of $2.56 in the box office.)

All of this makes Scientology seem ridiculous -- and certainly a good many of their beliefs fall into the "no, really?" category -- but there is a darker side to the organization.  People who have investigated church leaders have been harassed, sued, and threatened.  Wikipedia finally had to resort to closing off the main pages about the church and its leaders in 2009, because true believers wouldn't stop altering the pages to remove critical or negative passages.  The church continues to pour money into converting people in other countries, a move that some governments have resisted.  Just four days ago, a story in the Atlantic Wire describes charges being filed in Belgium against the church, including "extortion, fraud, privacy breaches, and the illegal practice of medicine."

People, however, continue to join, which baffles me.  Church leaders boast that Scientology is "the fastest-growing religion on Earth."  Given their secrecy, it's hard to get accurate numbers, but Janet Reitman, who did an investigative report for Rolling Stone in 2011, estimates their membership at between 100,000 and 200,000 worldwide.

So I must ask: what about this ideology do people find appealing?  It's a pretty bizarre amalgam of claims -- involving alien spirits ("Thetans"), an intergalactic overlord named "Xenu," a cult of personality about the founder that borders on hero-worship, and something very much like brainwashing.  Consider all of the negative press in recent years -- including an allegation that L. Ron Hubbard founded Scientology after making a bet with science fiction writer Robert Heinlein that he (Hubbard) could become filthy rich by making up his own religion.  (Hubbard won, obviously, but probably didn't need to collect, given how rich he did become.)

And yet people still join.  And donate.  Just yesterday, an article appeared in the online Australian news source The West entitled "Scientologists Build Underground 'Space Alien Cathedral,'" about a recently-discovered subterranean bunker near Roswell, New Mexico, which allegedly houses (in a thermonuclear-weapon-proof vault) an electronic copy of all of the writings of L. Ron Hubbard and his disciples.  Further, the shape of the bunker as seen from space is supposed to be a symbol recognizable to "Xenu," so if humanity tanks, the galactic overlord will still be able to find Hubbard's sacred texts. 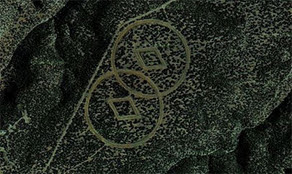 Which, of course, means that they still somehow have the kind of cash and manpower at their disposal that would allow them to build something this complex.

This is absolutely beyond me, and in fact I'm finding it hard to think of any insightful commentary I might be able to add.  I'll just finish up by saying that as an aside, my dogs are trained to bite anyone who jumps on our sofa, so you might want to take that under advisement.  In fact, it might be best if you just stay in your bunker where it's safe.  Thank you.
Posted by Gordon Bonnet at 3:08 AM