Sometimes accusations of conspiracy can come from unexpected sources -- and can create odd bedfellows.

Just last month, I ran into a TEDx talk by a gentleman named Jim Vieira (now removed from the internet by the powers-that-be).  In this talk, he made some rather curious claims.  To sum up: the Mound Builder cultures of early eastern North America were not just comprised of the ancestors of today's Native Americans, they included a race of red-haired giants.  And I do mean giant -- some of these folks were twelve feet tall... or more: 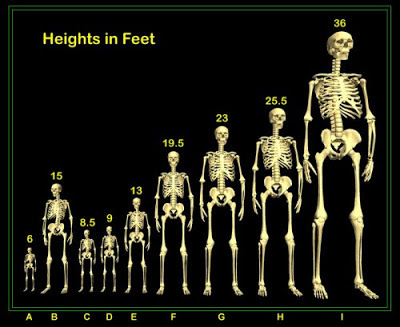 Oh, and did I mention that they had two, or even three, rows of teeth?

Man, those would have been some seriously scary dudes.

As evidence, Vieira trotted out some newspaper clippings from the early 20th century, one of which I include below: 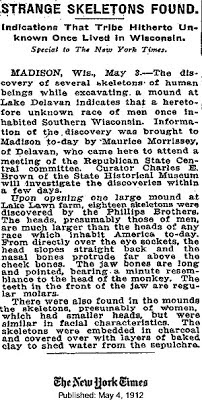 A few photographs of actual bones were shown, but then Vieira really went into deep water.  Because not only did he claim that such bones were commonly found in burial mounds in eastern North America, he claimed that hundreds of such bones had been sent to the Smithsonian Institution...

... which has, ever since, covered up their existence and denied it ever happened.

Now, my first thought was, "Why would they do that?"  What earthly reason would an institution founded to further knowledge have to arbitrarily pick one interesting archaeological finding, and deny it?  But that's what Vieira thinks; the giants walked the Earth, but the Smithsonian doesn't want you to know about it.

But that was only the beginning.  Vieira's talk spurred an unlikely association between several groups of wackos who normally don't have much to say to one another.  These included:
Websites supporting one, two, or all of the above viewpoints began to spring up all over, most citing Vieira's research as if it were the Holy Writ.  Then they began to cite each other, and the whole thing exploded in a giant cloud of woo-woo quantum frequencies, to perpetuate itself lo unto this very day.

The problem is, the evidence for any of this is kind of... non-existent.  As for the photographs, the late 19th and early 20th century were rife with frauds involving skeletons (think Piltdown Man, the Cardiff Giant, and so on).  The newspaper articles aren't any better; I could find you a hundred newspaper clippings from that era that are demonstrably false, so this sort of "evidence" really doesn't amount to much.  As for the Smithsonian participating in a coverup, the following is a quote from an archaeologist who actually has worked for the Smithsonian:


In 2007 I was a visiting scientist at the Smithsonian Museum Support Center, and while it is full of amazing and bizarre material (e.g., an entire herd of elephants that Teddy Roosevelt shot occupies one floor), there is no conspiracy to cover up or hide Native American giant skeletons or artifacts. Like most museums, the Smithsonian displays less than 1% of its collections at any given time, meaning that a lot of material spends decades (or sadly centuries) in its vaults awaiting exhibition. We can debate whether or not this is responsible stewardship (a debate that would also have to include a discussion of the chronic underfunding of public museums and the economics of public education), but to portray the Smithsonian today as part of some sort of a conspiracy of ‘misinformation and corruption’ to cover up Native American history by hiding giant Mound Builder skeletons excavated in the 19th century is ridiculous.

And if that wasn't enough, here's a quote from a spokesperson for the Center for American Archaeology, one of the most respected anthropological research establishments in the world:


I can assure you that the archaeological Woodland and Mississippian populations were not giants. In some cases, one can observe a slight decrease in average height (a few centimeters) with the transition from hunting and gathering to agriculture. This is a trend that is observed in many cultures that undergo an agricultural transition, and is likely related to shorter nursing times and increased early childhood grain consumption (maximum height is highly correlated to childhood protein consumption, so a high reliance on grain during childhood tends to result in shorter stature).

As a result of all of this, TEDx removed Vieira's talk (read the stinging rebuke Vieira received from TEDx curator Stacy Kontrabecki here). But that hasn't stopped the claims -- far from it. Kontrabecki was promptly accused of caving under pressure from the Evil Cadre That Runs The Smithsonian. Some bloggers claimed she'd been paid to silence Vieira. Virtually all of them agreed that the reason Vieira's talk was taken down was that... we can't just have this information about giants getting out there.

Right.  Because that's plausible.  The government has nothing better to do than to make sure the general public doesn't find out that Hagrid once lived in Ohio.

It can't just be that Vieira, and the other folks who are putting forth these claims, are just making shit up.  Nope.  It has to be a conspiracy.

So the removal of Vieira's talk that hasn't stopped the aforementioned woo-woos from continuing to quote him, and his "evidence," as hard, cold fact.  If you do a search for "giant skeletons Smithsonian conspiracy" you will get thousands of hits, leading you to websites authored by people who, in my opinion, should not be allowed outside unsupervised.

So, that's it.  Zero hard evidence, a bunch of wild claims, accusations of a coverup, and a very peculiar association of groups arguing for the same thing for different reasons.  Once again illustrating the truth of the saying from South Africa -- "There are forty different kinds of lunacy, but only one kind of common sense."
Posted by Gordon Bonnet at 2:55 AM