An end to squatchery: Ketchum screws up big time

At what point, given lack of evidence -- and often plenty of confounding conditions, such as hoaxes -- is it appropriate simply to tell people who make wild claims, "Sorry, you had your chance, we're not wasting any more time on you?"

It's an interesting question.  Lots of the more dedicated woo-woos, especially those whose chosen field of woo is cryptozoology, UFOs, hauntings, or psychic phenomena, regularly rail against the scientific world for not taking them seriously.  You hear words like "closed-minded," "arrogant," and "hidebound" thrown at the scientific establishment, because skeptical scientists won't even consider their claims worth investigating.

And up to a certain line, the woo-woos have a point.  We skeptics shouldn't dismiss claims out of hand just because they seem "out there."  But there comes a time when, with failure after repeated failure, the scientists and skeptics are well within their rights to give up.

Unfortunately, that point may have been reached with Bigfoot.

I say "unfortunately" because being an evolutionary biologist by training, no one would be more delighted than me if it turned out that there was a large, previously-unstudied hominin out there wandering in the woods.  But recent events may have finally, sadly, pushed that claim across into the same realm as homeopathy and astrology -- contentions that are so ludicrous that they are not even worth considering.

The events that have dropped Sasquatch into the Bog of Eternal Stench began last year, with a claim by a geneticist named Dr. Melba Ketchum that she had sequenced the DNA of some alleged Bigfoot tissue, and found that it had novel sequences identifying it as an unknown hominin.  Big news, eh?  A lot of folks, myself included, wondered if this might be the real deal at last.  Then Dr. Ketchum delayed... and delayed... and delayed releasing the results for peer review.  Then she did, and the paper got rejected because of "multiple problems with the research methodology."  So in a fit of pique, Dr. Ketchum and her associates started their own science journal (current number of publications: one) to publish her paper in, because that's the way to be taken seriously in the scientific world.  But just two days ago, some sharp-eyed folks at JREF (James Randi Educational Forum) spotted an even more fundamental problem with the paper...

... she used citations that were completely bogus.

This trick, common to lazy college students, amounts to putting references in your "Sources Cited" list that you either (1) are misrepresenting, (2) didn't look at, or (3) made up, in order to make it look like your paper was well-researched and well-supported.  Well, wait till you hear what she tried to pull in this one...  (The following is thanks to Sharon Hill, whose awesome blog Doubtful News should be on all of your bookmarks.)

(1) Milinkovitch, M C, Caccone, A and Amato, G. Molecular phylogenetic analyses indicate extensive morphological convergence between the ‘‘yeti’’ and primates. Molecular Phylogenetics and Evolution 31:1–3. (2004)  This paper is a well-known April Fool's joke, which places Sasquatches in the same clade as... horses and zebras!  But if that wasn't enough to clue you in that it's satire, there's a footnote with the following:  "More significantly, however, this study indicates that evolutionary biologists need to retain sense of humor in their efforts to reconstruct phylogenetic relationships.  Happy April Fool’s Day !"  Did Ketchum not even look at this paper? Because my 10th graders in Introductory Biology would have recognized it was a joke, even without the tag line.  Oh, and did I mention that Ketchum's specialty is... horses?

(2)  Coltman, D and Davis, C. Molecular cryptozoology meets the Sasquatch. TRENDS in Ecology and Evolution 21:60–61. (2006)  This paper is not itself a hoax, but is about a hoax -- not at all how she represents the citation.

(3)  Lozier, J D, Aniello, P and Hickerson, M J. Predicting the distribution of Sasquatch in western North America: anything goes with ecological niche modeling. Journal of Biogeography 36:1623–1627. (2009)  Check out the conclusion of the abstract on this paper: "We compare the distribution of Bigfoot with an ENM for the black bear, Ursus americanus, and suggest that many sightings of this cryptozoid may be cases of mistaken identity."  Doesn't really support your conjecture, does it, Melba?

When confronted with this, Ketchum responded with the following rambling diatribe on Facebook.  Spelling and grammar has been left intact:


Do to the wild rumors out on the internet. I felt it important to address a new rumor about a possible hoax. First we have never hoaxed anything as there is no need to. We have the proof we need in the science. I hope this helps everyone understand.
One of the early reviewers asked for any and all references related to our subject matter. We neither agreed with nor endorsed any of those references used though Bindernagel’s books are a good effort since at the time he didn’t know the human element involved. It was not our choice to use any of them though. That ref was a testament to the idiocy surrounding not only the scientific bias against the existence of these “people” but also the request by reviewers for refs that we had not felt had any place in our manuscript and were not included originally. This same reviewer required the so-called folklore that is in the introduction. That also was not in the original manuscript.

"We have the proof."  Oh, okay, right, that's all I need!  After this sideshow, Ketchum et al. would damn near have to trot a live Bigfoot onto stage for any scientist to give her the time of day.  Her snide little "I hope that helps everyone understand," and snarky comments about "idiocy" and "scientific bias" lead me to wonder if she's not a hoaxer, but simply has a screw loose.

In any case, much as it pains me to admit it, I think it's time to put the whole Sasquatch thing to rest.  No more shall we hear the mournful cry of the Bigfoot in the forests at night, no more shall we go-a-squatchin' in the trackless woods of the Pacific Northwest.  Sad to say, but we have better things to do with our time than to waste them chasing shadows, which is what Melba Ketchum and her team seem to be doing. 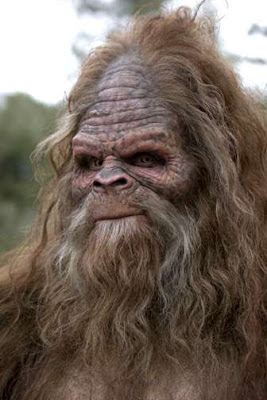