One of the frustrating things about being a skeptic is that I feel like I fight the same battles over and over.  I know that there's a point to continuing the battle; new generations of kids keep coming, and they need people who are committed to teaching them to think rationally.  And there are hopeful signs, such as a recent poll that indicated that the number of people who identify themselves as atheists has increased to its highest level ever (1 in 5).

But nowhere do I get that "oh, hell, here we go again" feeling like I do with the ongoing efforts by fundamentalist Christians to insinuate religion into public school science curricula.  This time it's the state of Oklahoma, where state bill HB1674 -- the so-called "Academic Freedom Bill" -- will allow students to submit work without penalty, even if it contradicts the understanding of evidence-based science.  [Source]

"I proposed this bill because there are teachers and students who may be afraid of going against what they see in their textbooks," said Gus Blackwell, a state representative and evangelical Christian who spent twenty years on the Baptist General Convention.  "A student has the freedom to write a paper that points out that highly complex life may not be explained by chance mutations."

They're getting craftier, I have to say.  Being that intelligent design and "irreducible complexity" didn't work (given that they are no more scientific than a theory that Christmas presents must be made by Santa Claus, given that there's no way that presents just show up by themselves on Christmas), they've had to turn to a different tactic -- branding disbelief in evolution as "critical thinking."  And if it wasn't obvious that they were talking about evolution, and not, for example, the periodic table, the bill itself explicitly states that its purpose is to encourage teachers to point out "scientific strengths and scientific weaknesses" of topics that "cause controversy," including "biological evolution, the chemical origins of life, global warming, and human cloning."

Yeah.  And that has no political and religious agenda.  Right.

A heartening point, though, is that of the eight "academic freedom" bills proposed since 2004, none have passed.  So one can only hope that even in a relatively conservative, religious state like Oklahoma, wiser heads will prevail. 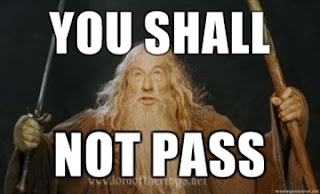 Isn't it interesting, too, that they call these bills "Academic Freedom" bills?  They follow a long succession of pieces of legislation that are given names that are far more positive than their content -- No Child Left Behind, the Clear Skies Initiative, the Patriot Act.  You have to wonder if legislators actually read the content of the bills they're voting on, or if they just look at the title, and think, "Whoa, I can't have it go on record that I voted against that."  I suspect that some of them would probably vote for the Happy Bunnies and Rainbows Act even if the act itself legalized using tasers on kittens.

So, just to set things straight: "academic freedom" and "critical thinking" do not mean some brainwashed 9th grader writing a paper in biology class claiming that Adam and Eve rode triceratopses, and that his teacher then has to give him an A.  Doubting mountains of evidence-based, peer-reviewed science because your pastor says different is not "thinking independently."  And there are enough vocal rationalists in this country that every time you ultra-religious try this, we will fight you.  No matter how tired of the battle we get.