Beyoncé of the Illuminati

Well, Superbowl XLVII is history, and the Baltimore Ravens have taken it despite a second-half rally by the 49ers that had Baltimore fans chewing their nails off.

The Superbowl attracts watchers for a variety of reasons.  Some root for particular teams, and if their favorite doesn't make it, they don't bother watching (I know one person who refuses to discuss the event if it doesn't involve the New Orleans Saints).  Others watch for the commercials, or the enjoyment of a wild, lavish spectacle, or the sheer love of football.

This year, of course, there was the added attraction of seeing how Beyoncé was going to use her magical powers and connections with the Illuminati to spread her evil message about the New World Order.

You think I'm making this up, but conspiracy theory websites have been hopping ever since the halftime show.  Take a look, for example, at this one, written by Sarah Wilson, who given the title must work for the Department of Redundancy Department: "What's the Verdict on Beyoncé's Illuminati Performance?  Illuminati-Fueled or Not?"

If you are understandably reluctant to read the original, let me sum it up as follows:


1)  Beyoncé has Illuminati connections.  Her husband Jay-Z's record company, Roc-a-Fella Records, has as its symbol a letter R with a circle and a triangle.  This obviously has nothing to do with the name of the company starting with "R," and circles and triangles being common geometrical shapes.
2)  During the performance, Beyoncé made a triangle with her hands.
3)  The halftime show involved mirrors, which have secret symbolism.
4)  There was a red circular light used during part of the show.  Obviously the "Eye of Horus."
5)  At one point, her legs made a shape that has "black sun symbolism." 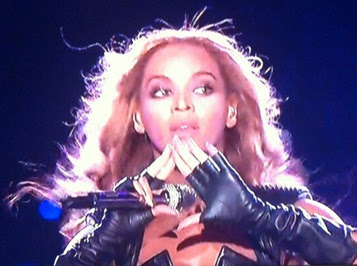 And if that's not enough to convince you doubters out there: during the second half, there was a 35-minute power outage that stopped the game dead in its tracks.  "Interestingly," writes Sarah Wilson, "following Beyoncé's performance, the Superdome suffered an outage that affected lights within the stadium, some cameras, and various pieces of audio equipment.  Power was lost for about 35 minutes before it was gradually restored to affected parts of the stadium.  The power company denied responsibility...  Social media outlets were alive with theories as to why part of the Superdome went dark, which ranged from 'doubting the power of Beyoncé' to her halftime show draining all of the power to her suspected Illuminati connections playing a role in creating darkness."

Oh, yeah, that's got to be it.  Because every time someone makes a special sign with their hands, it activates magical Illuminati Connections and causes a major power outage.  I have only one question to ask, to wit: did you learn logic from watching Mighty Morphin Power Rangers?  Or what?

It is a continual source of mystification for me how this kind of thinking can make sense to anyone.  That a performer might use edgy symbolism in his/her music, to deliberately up the hype, I can believe; if that's what Beyoncé was doing last night, it wouldn't be the first time.  Look at Madonna (not directly!  Use protective eyewear!).  She's worked so much arcane symbolism into her performances that she could be a walking illustration for the Malleus Maleficarum.  Nicki Minaj, Lady Gaga, Ke$ha, and Kanye West have also capitalized on the game of tweaking the fundamentalists and conspiracy theorists to get attention.

The thing is, does it mean anything?  Anything real?  There are those, of course, who would say yes; symbols have power, and that power can be invoked even if the people using them are doing so without awareness of what's really going on.  Predictably, I think the people who believe this are wingnuts.  Myself, I think the whole thing is just a publicity stunt, and any deliberate use of occult symbolism by pop music stars is just a callous attempt to get more attention.  As Brendan Behan once famously said, "There is no such thing as bad publicity."

So I doubt very much whether there was any connection between Beyoncé's use of the "Eye of Horus" -- deliberate or not -- and the power outage that followed.  If circular red lights caused power outages, then stoplights would be kind of problematic, you know?

In any case, if you watched the game, I hope you enjoyed it, and my condolences to any 49ers fans who are still weeping into their empty trays of chicken wings.  There's always next year.  That is, if Beyoncé doesn't wiggle her fingers at her next performance and somehow cause the collapse of major world governments.  You know how that goes.
Posted by Gordon Bonnet at 2:13 AM