Why oh why can't people just accept the scientific explanation for something?  Why must they come up with wacky woo-woo bullshit every damn time?

I am, of course, referring to the news story that I'm sure all of you have heard of by now; the meteor explosion that injured over 1,000 people yesterday near Chelyabinsk in the Urals region of Russia. 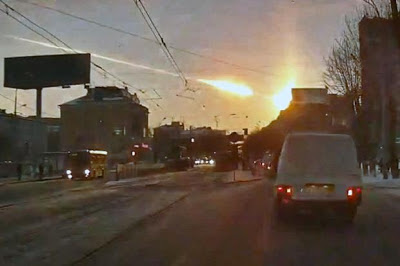 It was, to be sure, quite an event.  The shock wave from the explosion shattered windows and damaged buildings, and because it occurred near a populated area, it was captured more than once on cameras.

But the first problem with the public understanding of what had occurred was that it happened on the same day as a near pass by a different piece of rock, asteroid 2012 DA14.  Eminent astronomer Neil DeGrasse Tyson went on record as saying that the two events were unrelated, and the fact that they occurred on the same day was nothing more than a coincidence.

But no.  It couldn't be just a coincidence.  Start with a post in the blog Twilight Language, wherein we find the following quote from "astrologer Philip Levine:"


In other times and places, these would be a sign, a very big sign, saying something (what depends on which prophet or psychic you listen to). If you think the Universe is intelligent and an embodiment of some kind of Being, then you would want to know what It is saying.
If, like most, you believe the Universe is just a random collection of debris with no meaning other than chaos, then Statistics is your God. And the statistical chance of ONE of these things happening is immensely small, but TWO on the SAME DAY, within hours, in this infinitely vast Universe, is something to give one pause.
If you aren't sticking your head in the sand, how does this coincidence/synchronicity strike you?

It strikes me as a damn coincidence.  That's what you call it when two events coincide.

Then we had Russian parliament member Vladimir Zhirinovsky blathering on that the meteor wasn't actually a meteor, it was an American weapons test:


Those were not meteorites, it was Americans testing their new weapons... (Secretary of State John Kerry) was looking for (Russian Foreign Minister) Lavrov, and Lavrov was on a trip.  He meant to warn Lavrov about a provocation against Russia.

Right.  Because that's plausible.  The US Secretary of State calls up, and says, "Um... just so you know, we're about to blow up a weapon over one of your cities today.  Hope you don't mind.  Give my regards to the wife and kids."

Things only got worse from there.  A "senior clergyman" in Yekaterinburg said the meteor was a Sign from God:


From the Scriptures, we know that the Lord often sends people signs and warnings via natural forces.  I think that not only for the Ural [regions] residents, but for the whole of humanity, the meteorite is a reminder that we live in fragile and unpredictable world.  It is the Lord's message to humanity, and we need to pray to understand it.

Or, maybe, just consult an astronomer.  They seem to understand it pretty well.

Which is more than I can say for major league baseball player José Canseco, who weighed in on the event with the following series of tweets:

The media is now calling Canseco a "meteor truther."  Which makes me want to weep softly and bang my head against my desk.

NASA, of course, had the straight scoop, and said that the Russian explosion was, in fact, a meteor, and that this meteor and the flyby asteroid were unrelated:


According to NASA scientists, the trajectory of the Russian meteorite was significantly different than the trajectory of the asteroid 2012 DA14, making it a completely unrelated object. Information is still being collected about the Russian meteorite and analysis is preliminary at this point. In videos of the meteor, it is seen to pass from left to right in front of the rising sun, which means it was traveling from north to south. Asteroid DA14′s trajectory is in the opposite direction, from south to north.

But why listen to a bunch of silly old scientists when you can get your information from an astrologer, a clergyman, a batshit crazy politician, or a washed-up baseball player?

Oh, and one last thing; if you see people post a photograph that they claim is the crater from yesterday's meteor, and it looks like this:

Please do me a favor and set them straight.  This is the Derweze Gas Crater in Turkmenistan, a place where a combination of natural gas seeps and soil that's high in flammable organic matter resulted in a giant burning hole in the ground.  It has nothing to do with the meteor.