So, yesterday, I was looking at photographs of alleged ghosts, and completely creeping myself out.

Just so I can share the experience with you, here are a few that I found especially shiver-inducing.

First, from a security camera in a library in Evansville, Indiana, comes this image of a hunched, shadowy creature creeping across the floor... of the Children's Reading Room: 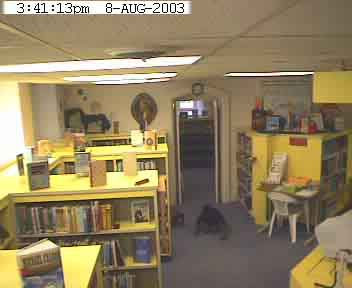 Or how about this one, an old photograph from the 1940s that shows a screaming ghost reaching out towards an unsuspecting young couple: 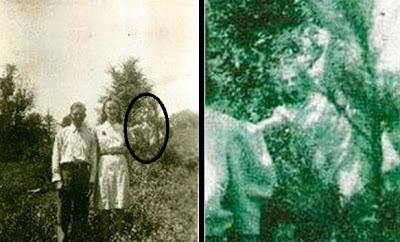 Or this shot of a stern man standing behind an elderly woman -- a man who supposedly wasn't there when the photograph was taken: 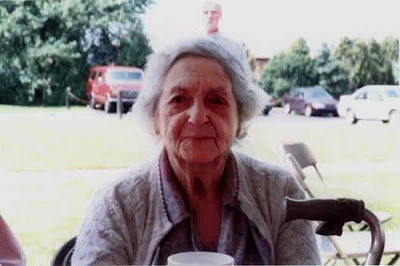 Or the shadow in the kitchen -- a shadow cast by no object visible in the photograph (this one immediately reminded me of the episode "Identity Crisis" from Star Trek: The Next Generation -- one of the flat-out scariest episodes they ever did): 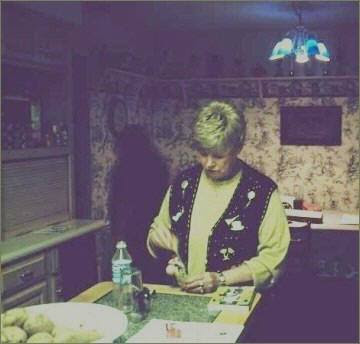 So, anyway, there I am, getting more and more weirded out (and still, for some reason, not simply switching to a website with cute pictures of puppies, or something).  And I thought, "Why am I freaking out about all of this?  Not only have I never had a single experience of anything supernatural, I don't even believe in any of this stuff.  I am morally certain that all of these photographs were either deliberate hoaxes, or were camera malfunctions/artifacts, or are examples of pareidolia -- some completely natural explanation must be responsible.  So why am I scared?"

And my mind returned to a book I just finished last week, Thinking, Fast and Slow by Daniel Kahneman, the psychologist who won the Nobel Prize in economics in 2002.  Kahneman's specialty is why humans make irrational decisions; his research into how that applies to economic decision-making is why he won the Nobel.  More interesting to me, though, is the facet of his research that shows that human thinking is split into two discrete modules -- a fast module and a slow one.  And those two modules are frequently at odds with one another.

No "rational thinking" is needed to come to the conclusion that this woman is angry.  On the other hand, the slow module is invoked when doing a math problem like, what is 223 x 1,174?  The vast majority of us could solve that problem, but it would take time and concentration.  (The fact that there are savants who can solve problems like that nearly instantaneously makes me wonder if their brains are somehow wired to do math with the fast module of the brain; merely a speculation, but it's suggestive.)

As an example of how the two modules can be at odds, consider the "Linda Problem."  Participants in a study were told a story about Linda, a single woman, intelligent and outspoken, who was very concerned with issues of social justice.  The participants were then asked which of the following possibilities was more likely:  (1) Linda is a bank teller; or (2) Linda is a bank teller and is active in the feminist movement.  By a vast majority, participants chose option 2.  (Did you?)

The problem is, option 2 is wrong.  Not just maybe wrong, it's flat-out wrong, as in impossible.  How could the likelihood of Linda's being a feminist bank teller exceed the likelihood of her being a bank teller?  All feminist bank tellers are bank tellers; adding an extra detail to the description can only have the effect of decreasing the probability.  (To make this clearer, how can there be more brown dogs than there are dogs?)  But the fast module's quick assessment of the situation was that from the information given, she was very likely to be a feminist; the likelihood that she was a bank teller was equal in both possibilities; so it jumped to the (incorrect) conclusion that the combined probability was higher.

So, you can see how the fast module, however useful it is in making the snap judgments that are essential in getting us through the day, is not, at its basis, rational.  It is primed by previous experience, and is inherently biased toward finding the quickest answer possible, even if that answer is completely contrary to rationality.

And that, I think, explains why a diehard skeptic can still be completely weirded out by ghost pictures.  The slow module in my brain thinks, "Okay, pareidolia.  Or the photo was doctored.  No way is this real."  My fast module, on the other hand, is thinking, "Good lord, that's terrifying!  Time for some adrenaline!"  And no amount of soothing talk from my slow module seems to make any difference.

Especially that one with the creeping thing in the library.  That one is freakin' scary.
Posted by Gordon Bonnet at 2:54 AM