I spend a lot of time in this blog being negative.  On some level, it's inevitable, given my subject matter.  I've chosen to seek out bad thinking, stupid ideas, bizarre beliefs, and random illogic, and hope (by bringing that stuff to light) to sharpen awareness of the dangers of irrationality.

The personal danger, of course, both to myself and my readers, is becoming cynical.  One of the first points I make in my Critical Thinking class is that credulity and cynicism are equal and opposite errors; trusting no one is as lazy, and as wrong, as trusting everyone.  But still, it's hard not to be a little critical of humanity at times.  Like George Carlin said: 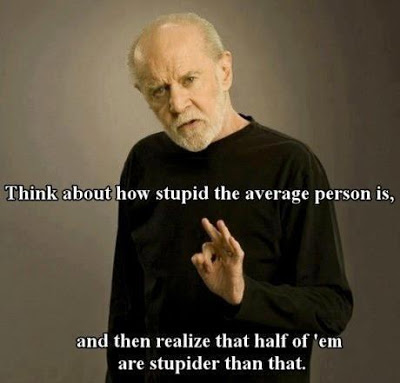 Yesterday, one of my coworkers (for reasons I'll describe in a moment) challenged me to write something positive, to (for once) not write about failures of human reason, rationality, and compassion, but about its successes.  It's easy enough to poke fun at the woo-woos; my teacher friend set me the task instead to celebrate the ways that the human mind have made things better.

It was an important reminder for me, honestly, because as a teacher, I can't afford to become cynical.  If I ever give up hope that my students can grow up to make the world a better place, that they are capable and smart and moral and worthy of the best I can offer them, I should retire and get a job as a WalMart greeter.  And sadly, I do hear teachers say those sorts of things; any number of negative statements preceded by the words "Kids these days..."  Usually insinuating that when we were children, all of us were hard working, diligent, ethical, honest, and respectful.  Not only do I feel like asking people who make these sorts of statements, "Do you really not remember anything about being a teenager?", I think that attitude is profoundly unfair to kids today.  Admittedly, there are some differences; the ubiquity of electronic media, access to information, changes in attitudes toward relationships and sexuality -- all make today's cultural milieu a different place to grow up than it was the four-odd decades ago that I was a teenager.  But kids are kids, people are people, and they have the same hopes, dreams, and desires that we do.  If you want an outlook that I like better, watch the following:

*brief pause to blow my nose*  Sorry, that one makes me cry every damn time.

And of course, there's the video that's the reason all of this came up.  Yesterday, we had an assembly, run by our principal (who, as an aside, is far and away the best administrator I have ever worked for).  The whole gist of it was that we each need to find our voices -- a message that resonated especially strongly with me, because when I started this blog four years ago it was in an effort to find my own voice, to have a way to express myself about the things I thought were important.  And he ended with this video:

It was as we were leaving that my coworker, the physics teacher, said to me, "You need to work this into your blog."  I told him I'd rise to the challenge if I could.  So I'll end with issuing the same challenge to you; go out and speak up.  Take on the issues you think are critical.  Encourage the people around you to make your community a better place.  People do, you know.  Yes, there are bigots, lazy thinkers, and irrational individuals, but there are also plenty of smart, kind, self-sacrificing, compassionate people, and I live in the hope that the latter are more numerous:

So, in the words of Kid President: "Now go out, and create something that will make the world awesome."

Posted by Gordon Bonnet at 4:49 AM