Globe-trotting with the gods

Despite my fairly persistent railing against people who make outlandish, unverifiable claims, I find it even more perplexing when people make outlandish, demonstrably false claims.  I mean, it's one thing to claim that last night you had a dream in which your late Aunt Gertrude told you her secret recipe for making her Extra-Zesty Bean Dip.  I couldn't disprove that even if I wanted to, which I don't, because I actually kind of like bean dip.

But when someone makes a statement that is (1) falsifiable, and (2) clearly incorrect, and yet stands by it as if it made complete sense... that I find baffling.  "I'm sorry," they seem to be saying, "I know you've demonstrated that gravity pulls things toward the Earth, but I believe that in reality, it works the opposite way, so I'm going to wear velcro shoes so I don't fall upward."

And for once I am not talking about young-Earth creationism.

This all comes up because of an article that appeared on Unexplained-Mysteries.com yesterday.  Entitled "Easter Island Heads -- They Speak At Last," it was written by L. M. Leteane.  If that name sounds familiar to regular readers of this blog, it's because Leteane has appeared here before, most recently for claiming that the Central American god Quetzalcoatl and the Egyptian god Thoth were actually the same person, despite one being a feathered snake and the other being a shirtless dude with the head of an ibis, which last I checked hardly look alike at all.  Be that as it may, Leteane concludes that this is why the Earth is going to end when a comet hits it in the year 3369.

Here's the basic outline of his most recent argument, if I can dignify it by calling it that.  Fasten your seatbelts, it's gonna be a bit of a bumpy ride.

1)  The Bantu people of south-central Africa came originally from Egypt, which in their language they called Khama-Roggo.  This name translates in Tswana as "Black-and-Red Land."

2)  Charles Berlitz, of The Mystery of Atlantis fame, says that Quetzalcoatl also comes from "Black-and-Red Land."  Berlitz, allow me to remind you, is the writer about whose credibility the skeptical researcher Larry Kusche said, "If Berlitz were to report that a ship was red, the chances of it being some other color is almost a certainty."

3)  The Olmecs were originally from Africa, but then they accompanied the god Thoth to Central America.  In a quote that I swear I am not making up, "That is evidently why their gigantic sculptured heads are always shown helmeted."

4)  The Babylonian goddess Ishtar was also a real person, who ruled in the Indus Valley for a while (yes, I know that India and Babylonia aren't the same place; just play along, okay?) until she got fed up and also moved to Central America.  She took some people with her called the Kassites.  This was because she was heavily interested in tin mining.

5)   Well, three gods in one place are just too many (three too many, in my opinion), and this started a war.  Hot words were spoken.  Nuclear weapons were detonated.  Devastation was wreaked.  Passive voice was used repeatedly for dramatic effect.

6)  After the dust settled, the Olmecs, who were somehow also apparently the Kassites and the Bantu, found themselves mysteriously deposited on Easter Island.  A couple of more similarities between words in various languages and Pascuanese (the language of the natives of Easter Island) are given, the best one being "Rapa Nui" (the Pascuanese name for the island) meaning "black giant" because "Rapa" is a little like the Hebrew "repha" (giant) and "Nui" sounds like the French "nuit" (night).  This proves that the island was settled by dark-skinned giant people from Africa.  Or somewhere.

7)  The Olmecs decided to name it "Easter Island" because "Easter" sounds like "Ishtar." 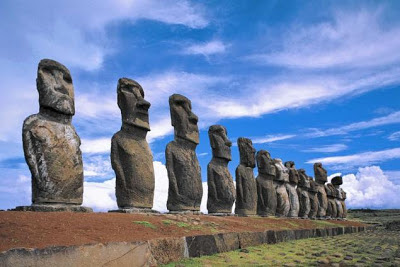 Well.  I think we can all agree that that's a pretty persuasive logical chain, can't we?

Okay, maybe not.  Let's start with the linguistic funny business.  Unfortunately for L. M. Leteane, linguistics is something I know a bit about; I have an M. A. in Historical Linguistics (yes, I know, I teach biology.  It's a long story) and I can say with some authority that I understand how language evolution works.  I also know you can't base language relationships on one or two words -- chance correspondences are all too common.  So just because "roggo" means "red" in Tswana (which I'm taking on faith because Leteane himself is from Botswana, and my expertise is not in African languages), and "rouge" is French for "red," doesn't mean a damn thing.  "Rouge" goes back to the Latin "ruber," then to Ancient Greek "erythros," and finally to a reconstructed Proto-Indo-European root "reudr."  Any resemblance to the Tswana word for "red" is coincidental.  And as for "Rapa Nui" meaning "black giant," that's ridiculous; Pascuanese is a Polynesian language, which isn't Indo-European in the first place, and has no underlying similarity to either French or Hebrew other than all of them being languages spoken by people somewhere.

And as far as "Easter Island" being named after Ishtar... well, let's just say it'll take me a while to recover from the headdesk I did when I read that.  Easter Island was so named by the Dutch explorer Jacob Roggeveen, because he first spotted it on Easter Sunday in 1722.  He called it Paasch-Eyland, Dutch for "Easter Island;" its official name is Isla de Pascua, which means the same thing in Spanish.  Neither one sounds anything like "Ishtar."

The thing I find maddening about all of this is that Leteane mixes some facts (his information about Tswana) with speculation (he says that the name of the tin ore cassiterite comes from the Kassites, which my etymological dictionary says is "possible," but gives two other equally plausible hypotheses) with outright falsehood (that Polynesian, Bantu, and Indo-European languages share lots of common roots) with wild fantasy (all of the stuff about the gods).  And people believe it.  His story had, last I checked, been tweeted and Facebook-liked dozens of times, and amongst the comments I saw was, "Brilliant piece of research connecting all the history you don't learn about in school!  Thank you for drawing together the pieces of the puzzle!"

So, anyway.  I suppose I shouldn't get so annoyed by all of this.  Actually, on the spectrum of woo-woo beliefs, this one is pretty harmless.  No one ever blew himself up in a crowded market because he thought that the Olmecs came from Botswana.  My frustration is that there are seemingly so many people who lack the ability to think critically -- to look at the facts of an argument, and how the evidence is laid out, and to see if the conclusion is justified.  The problem, of course, is that learning the principles of scientific induction is hard work.  Much easier, apparently, to blather on about feathered serpents and goddesses who are seriously into tin.
Posted by Gordon Bonnet at 2:50 AM