There's no pleasing some people.

When I heard that Darren Aronofsky was making a movie, due out in 2014, about the Great Flood -- and starring such Big Names as Russell Crowe, Jennifer Connelly, and Anthony Hopkins -- I thought that the über-Christians would be delighted.  After all, they mostly seem to be wildly in favor of movies like The Ten Commandments, The Greatest Story Ever Told, and The Passion of the Christ.  Even Ben Hur was one of my extremely Catholic mother's all-time favorite movies, despite the most literal reading of the bible turning up very few chariot races.

But no.  Noah, with Russell Crowe in the title role, is stirring up a lot of controversy amongst the literalist crowd.  And it's not just because, in producer Scott Franklin's words, "Noah is a very short section of the Bible with a lot of gaps, so we definitely had to take some creative expression in it.  But I think we stayed very true to the story and didn't really deviate from the Bible, despite the six-armed angels."

To get a flavor for why fundamentalists are howling about this movie -- and also to understand how far out of the realm of reality they've gone -- take a look at a webpage, courtesy of BeginningAndEnd.com,  a website for and about literalist/Christian apocalyptic ideas.  Entitled "Russell Crowe's Noah -- A Warning for Christians," this website makes the following claims:

2)  The main wicked guys that god was aiming to smite were the Nephilim, who were a race of evil giants that were born when fallen angels had sex with human women.  God didn't want "the entire human gene pool to be corrupted by fallen angels," so he decided to kill everyone.

3)  Well, almost everyone.  Noah and his family, of course, were "righteous" so he saved them.

5)  The whole "raining for forty days and forty nights" thing was really a big deal, not only because that is a crapload of rain, but because prior to the Great Flood it had never rained.  "The moisture in the environment came from geysers in the ground...  A mist from underground pressure provided water for plant life.  The pre-flood word in short had a hyperbaric environment.  (Some Christian researchers have theorized that this environment contributed to the long life spans of the people before the flood, where some people lived over 900 years. However, after the flood, there is a sharp decrease in life spans down to the lengths seen today.)"  Because we all know how higher atmospheric pressure makes people live longer.  And no, I didn't make that quote up, either.  And if you don't think that there are people who seriously believe that the long life spans reported in the bible were due to higher atmospheric pressure, take a look at this website, which is inadvertently hilarious in its attempt to explain the biblical account "scientifically."  You know, with math and graphs and all.  It's amazing.

6)  It's a serious problem that the movie shows that on the Ark, Noah had an "animal hospital" to take care of injured animals.  This is non-biblical, the website tells us.  Nowhere in the bible does it say that Noah had an "animal hospital," despite the fact that given that he had only two of each kind of animal, having one of them die would be pretty awful.  (Maybe that's what happened to the unicorns, which by the way are mentioned in the bible as being real -- check out Job 39:9-12.)

7)  So, all in all, the movie Noah is a wicked and evil film.  "Pray for the makers of this movie to repent and believe the Word of God, rather than abusing it," we're told.  "And spread the Word to other Christians to not support such a blasphemous, anti-Christian film."

So, yeah.  Yikes.  It's hard to know where to start.  For me, being a science teacher, the best part was when they started talking about how before the Great Flood plants were watered by "geysers."  But really, the whole thing is worth reading, if for no other reason to get a feeling for the twisty anti-logic fundamentalists use to explain the parts of the biblical account that couldn't possibly have happened.  Of course, all they have to do is to fall back on "anything is possible with god," and also, "if you don't believe this, down to the last word, you are going to be doomed by the god of mercy to eternal hellfire ha ha ha ha."  Which, you have to admit, are pretty persuasive arguments. 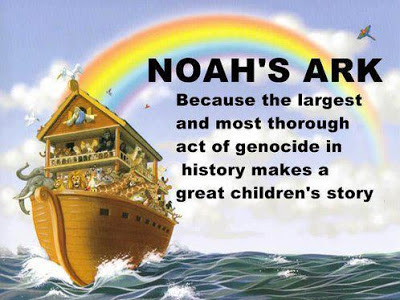 Anyhow, like I said, some people are impossible to please.  You'd think that just the fact that Hollywood is giving a nod to the biblical account would have been enough, but no.  They didn't do it the right way.  Can't have Noah appearing to be an eco-wacko.  Can't have any mention of anything that wasn't mentioned in the bible.  Got to include lots of naughty angel/human sex.

Of course, it's not like I'm going to go see the movie anyhow.  I'm not into biblical epics.  If I want to watch a movie based in mythology, I'll take Lord of the Rings any day.  All in all, it's a hell of a lot more moral a story. 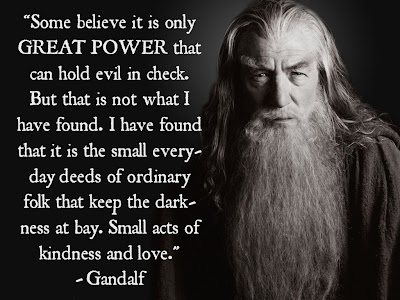