I knew that as soon as Pope Benedict XVI announced his resignation, the wingnuts would have a field day with it.  And sure enough, the woo-woo websites were hopping yesterday.  The words "conspiracy" and "prophecy" and "antichrist" and "apocalypse" were used.  Obviously, it couldn't be just what the Vatican said it was -- that Benedict was retiring because he was too pooped to pope.  No.  It had to be something much bigger than that.

Let's start with the fact that shortly after the pope announced his resignation, lightning struck St. Peter's Basilica in Rome: 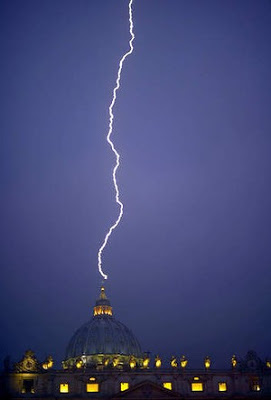 According to a story in USA Today, experts have analyzed the photograph and found that it's actually not a fake (which was my first thought when I saw it).  On the other hand, I'm not ready to say it's a sign from god, either.  After all, according to lightning expert Martin A. Uman, there are over eight million lightning strikes in the world every day, which is a crapload of signs from god if that's what they are.  Maybe god's "smite" button is stuck on, or something.

But that's not where the nonsense stopped, unfortunately.  According to the site International Tribunal Into Crimes of Church and State, the pope's resignation was because "a European government" was planning on issuing a warrant for his arrest.  The upshot was that the "European government" had its sights set on the Vatican because "...Pope Benedict's complicity in criminal activities of the Vatican Bank (IOR) was compelling his eventual dismissal by the highest officials of the Vatican."

Because that's plausible.  We all know how much the Vatican complies with the demands of other governments.  If the president of, for example, Bulgaria were to ask for the pope's arrest, the Vatican would have no choice but to turn him over.  (Chaos would then ensue as other world leaders gave their two cents' worth, with Hugo Chávez demanding that everyone in Vatican City subscribe to Socialist Worker's Monthly, Mahmoud Ahmedinejad requiring that nuns switch to wearing burqas, and Kim Jong Un asking the College of Cardinals to adopt a "really sexy new hairstyle.")

Then the apocalyptoids began to chime in.  There was a prophecy, they said, made back in 1139 by a guy named Saint Malachy, who either received a vision from god or else had a really bad acid trip, and who claimed that each of the popes was fulfilling a prophecy.  Saint Malachy listed 112 popes, and said that the last one, "Petrus Romanus" (Peter the Roman) would reign throughout the Tribulation, and his reign would end with Jesus returning to judge us all.

Of course, most modern scholars think that the "Prophecies of Saint Malachy" are a late 16th century forgery; even Benito Jerónimo Feijóo y Montenegro, an 18th century Spanish monk, thought the whole thing was ridiculous, noting that the "prophecies" prior to 1600 are extremely accurate, and the ones thereafter seemed like wild guesses.

There are a couple of hits, though, if you squinch your eyes up and look at the prophecies juuuust right.  For example, the prophecy for John Paul I is that he came from "the midst of the moon," and his month-long reign began during a half-moon.  (Okay, I know that half-moons happen twice a month.  Just play along, okay?)  Then we have his successor, John Paul II, whose line has to do with the "labor of the sun," and he was supposedly born during a solar eclipse and buried during a solar eclipse.  But even if eclipses aren't as common as lightning strikes, they're still pretty damn common, with between two and five occurring somewhere in the world every year.  So some date relevant to John Paul II would be bound to occur near an eclipse, no matter what.  The prophecy of Benedict himself requires yet a further reach; his is "gloria olivae," the "glory of olives."  And the best they could do with that was that Benedict was named after St. Benedict of Nursia, who founded the Benedictine Order, which has as its emblem a picture of St. Benedict holding an olive branch.

So, anyway.  Saint Malachy (or whoever forged all of this nonsense in the 16th century) says that the next guy, Petrus Romanus, will have a bit of a rough go:

In the extreme persecution of the Holy Roman Church, there will sit Peter the Roman, who will pasture his sheep in many tribulations: and when these things are finished, the city of seven hills will be destroyed, and the terrible judge will judge his people.  The End.

So the College of Cardinals had better be careful.  If I were a cardinal, I'd made sure to vote for a guy named "Steve" just to be safe.

Anyhow, that's the latest from the world of crazy quasi-religious prophecy.  It'll be interesting to see what happens next.  Myself, I'm guessing that the College of Cardinals will vote in a new pope, who will pretty much keep doing what they've always done, and everything will settle down, with no further lightning strikes, arrest warrants, or tribulations.  But who knows?  Maybe Saint Malachy was right.  The whole "terrible judge" thing sounds pretty dire.  Maybe I ought to invest in a smite-proof bunker.
Posted by Gordon Bonnet at 2:45 AM