One of the things I find hard to understand about woo-woos is their hostility toward the people who want to test their beliefs.

Not the actual charlatans, mind you.  I get why they're hostile; we skeptics are trying to ruin their con game.  But the true believers, the ones who honestly think they're in touch with Great and Powerful Other Ways of Knowing -- shouldn't they be thrilled that finally, there are scientists who will submit their claims to rigorous investigation?

Of course, they aren't, for the most part.  They hate skeptics.  Take, for example, the outright fury that James Randi's Million-Dollar Challenge evokes.  This site even goes so far as to call Randi a cheat, and states that he and prominent skeptic Michael Shermer (author of the wonderful book Why People Believe Weird Things) are "not real skeptics."  Then there's the piece "The Relentless Hypocrisy of James Randi," by Michael Goodspeed, which ends thusly:


I must again remark on the irony of self-described magicians trying so desperately to debunk paranormal phenomena. After all, Magic in its purest form is an embracing of the Unknown, and these people run from it every chance they get.

I must point out, in the sake of honesty, that the Goodspeed article appeared at Rense.com -- the website owned by Jeff Rense, who is a wingnut of fairly significant proportions.  RationalWiki says about Rense that he is an anti-Semite, Holocaust denier, conspiracy theorist, and alt-med peddler who is "the poor man's Alex Jones."

So.  Yeah.  Randi and Shermer make people angry, but most of their objections seem to be just whinging complaints about "not playing fair" and denying specific requests (Goodspeed, for example, takes Randi to task for not even considering the claim of Rico Kolodzey, who claimed to be a "breatharian" -- that he could live on nothing but air and water.  Me, I would not only have refused to consider Kolodzey's claim, I would have laughed right in his face.  Maybe I'm "not a real skeptic," either.)  You rarely hear anyone explain why the woo-woos think that the scientists' methods are wrong.  Most of the attacks are just that -- free-floating ad hominems.  Other than the occasional, Uri-Geller-style "your atmosphere of disbelief is interfering with the psychic energies," no one seems to have a very cogent explanation of why we shouldn't turn the hard, cold lens of science on these people's claims.

Except, of course, that none of them seem, under laboratory conditions, to be able to do what they claim to do.  When pressed, or even when subjected to a simple set of controls, all of the claims fall apart.  Of course, some of them even fall apart before that: 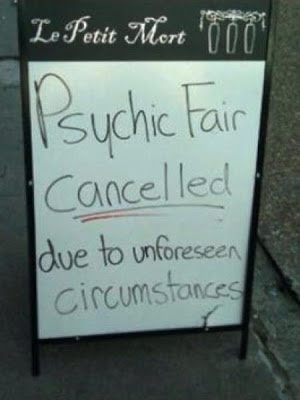 And it's not that we skeptics don't give them plenty of chances.  Take, for example, last week's challenge by an Australian skeptics' group, the Borderline Skeptics, to anyone who thinks they can successfully "dowse" for water.  Dowsing, for those of you unfamiliar with this claim, is the alleged ability to use vibrations in a forked stick to find water (or lost objects, or buried treasure, or a variety of other things).  Dowsing has failed all previous tests -- most of the vibrations and pulls allegedly felt by practitioners are almost certainly due to the ideomotor effect.  Still, dowsers are common, and vehement in their claims that their abilities are real.  So the Borderline Skeptics have organized a challenge in which supposed dowsers have to try to locate buried bottles of water.  The event is scheduled for March 10, and any winners will be candidates for a $100,000 cash prize.

And instead of being happy about this, dowsers are pissed.  They've already started to claim that the game is rigged, that the Borderline Skeptics are a bunch of cheats, and that they wouldn't stoop to the "carnival sideshow atmosphere" that such a test would inevitably generate.  "I will not debase myself," one alleged medium wrote about the James Randi challenge, "to have these cranks take pot shots at my God-given abilities."

Thou shalt not put thy woo-woos to the test, apparently.

You have to wonder, though, how anyone from the outside doesn't see this for what it is -- special pleading, with a nice dose of name calling and shifting of the ground whenever they're challenged.  So I suppose I do get why the woo-woos themselves don't want to play; at the best, it would require them to reevaluate their claims, and at the worst, admit that they've been defrauding the public.  But how anyone considering hiring these people, giving them good money, can't see what's going on -- that is beyond me.

Which brings me to my last news story -- just yesterday, the South Florida Sun-Sentinel reported that a Delray Beach psychic center was robbed by an armed man, who burst in brandishing a gun, made the three women and one child who were present at the time lie on the floor, and took all the money in the place.

You'd think they'd have seen this one coming, wouldn't you?
Posted by Gordon Bonnet at 2:45 AM