As a science teacher, I am frequently asked about the evidence for climate change.  It's a more difficult question than it seems at first.  Teasing apart anomalous weather events from overall trends in the climate, determining if any changes we see are natural fluctuations or human-induced, and (if the latter) determining what could be done to ameliorate the situation -- none are trivial matters.  Add in the political spin, bias, and wishful thinking, and what you have is a recipe for fuzzy thinking and specious conclusions.

Nevertheless, the vast bulk of the data supports the contention that anthropogenic climate change is, in fact, occurring.  The best analysis of this position is from science writer James Lawrence Powell, who was an appointee to the National Science Board by both President Reagan and the first President Bush, and is available here.  Powell's angle was that if climate change denial is actually a scientifically supportable position, then it should be reflected in the peer-reviewed papers on the subject -- there should be approximately equal numbers of papers that show that the Earth is warming as ones that show that it is not.  In fact, here's what he found: 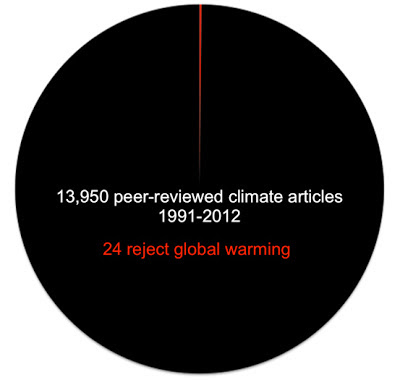 Which, as astronomer Phil Plait (of the wonderful blog Bad Astronomy) said, is a "slam dunk."

That hasn't stopped the controversy.  Peer review, deniers say, is skewed toward buying the party line.  The data is flawed, or outright fabricated.  Scientists have an agenda that they, in their surreptitious and evil manner, are foisting upon the unwitting public, as if somehow scientists want an environmental catastrophe to occur.  (I wonder if the ease with which some people accept this hearkens back to the "mad scientist" trope from 1950s-era horror movies.)

Of course, as the data keeps pouring in, deniers have to work harder to explain it away, and the explanations become more and more convoluted.  The best one I've seen yet I ran across just yesterday, in the accurately (and ironically) named website Aircrap.  Aircrap derives its moniker from its focus on the government's role in deliberate manipulation of the Earth's systems -- they just love chemtrails, HAARP, and DARPA, and blame everything from Hurricane Katrina to the Japanese tsunami on the American government.

Well, now that the evidence for climate change is becoming incontrovertible, they can't just accept that it's anything as routine as anthropogenic carbon dioxide and methane to blame.  So they took one piece of the climate change puzzle -- sea level rise -- and came up with a novel way to explain it.  (And by "novel" I mean "so crazy that even Rush Limbaugh wouldn't believe it.")

In an article you can read here, they inform us that the sea level isn't rising; the land is sinking.

Yes, you read that right.  The oceans aren't getting any higher; that would be ridiculous.  What's really happening is that humans are extracting ground water, causing the ground to subside in the fashion of a sponge drying up.  The solution:  get the government to stop spraying cloud-seeding agents into the air, so that more rain falls, so that the water being pumped out of the ground gets replaced.

I find it interesting that the chemtrails crowd is anti-climate-change.  You'd think they'd love this idea, as it gives fertile ground for conspiracy theories involving the US government and Big Oil covering up evidence.  But in a scan through chemtrails websites, at the cost of millions of innocent cells in my prefrontal cortex who died in agony, I didn't find a single one that accepted climate change.  The whole thing is a conspiracy of a different sort -- a conspiracy by the evil scientists who want to deflect your attention from what the government is actually up to.  In their skewed worldview, the scientists are complicit in the coverup and are fabricating data on Antarctic ice melt in order to keep you from finding out that the government is putting secret weather-altering chemicals into jet fuel.

Now, don't get me wrong; I know enough geology to realize that extraction of groundwater can cause subsidence.  It's called "sinkhole formation."  But the idea that the continental landmasses everywhere are somehow settling downward as water is pumped out is, to put not too fine a point on it, moronic.  It reminds me of the amazingly wonderful science textbook spoof Science Made Stupid (available online, for free, here!  WARNING: Once you start reading it, you will read the whole thing in one sitting), wherein we find the following explanation of tides:


We sometimes speak of the tides causing the oceans to rise or fall. Of course, this is a fallacy. Actually, it is the land that rises and falls.

As the Earth rotates, the moon's gravitational attraction is greatest first on one side, then the other. Land masses, being rigid, are pulled up or down accordingly. Oceans, being liquid, are free to flow back to their normal level.

You have to wonder if the folks over at Aircrap stumbled on a copy of Science Made Stupid at a used book sale, and thought it was serious.

It would explain a lot.

Anyhow, it's interesting to see how people approach the whole thing, and as more evidence for climate change amasses (which it will) how long it will take for the last few deniers finally to cave.  Well, not the last few; as we've seen over and over in this blog, you can never convince everyone, not with mountains of evidence.  But at least, enough people that we finally have the global will to try to do something about it.

I can only hope that that sea change doesn't come too late.
Posted by Gordon Bonnet at 4:49 AM