I've made the point more than once in this blog that we skeptics have a hard enough time counteracting the built-in errors -- things like confirmation bias, dart-thrower's bias, and the inherent inaccuracies of our brains and perceptual apparatus.  The last thing we need are people out there, callously and deliberately creating convincing fakes.

The latest in this long string of liars came to my attention because of a video link that popped up on Facebook.  The individual who posted it headed it with the caption, "And you think angels aren't real!"  Underneath, another poster had responded, "I don't see how this could possibly have been faked."  So, naturally, I had to take a look... and so do you.  So take two minutes and watch the whole thing.  [Link:  Is he SUPERMAN or an ARCHANGEL?]

Pretty wild, eh?  If you watched it till the end, you might have noticed that they even got the angle of the shadows right -- as the truck bears down on the cyclist, the shadow turns and lengthens at just about the angle I'd expect.

Now that's what I call attention to detail.

Let's leave aside my usual objections that "there is no evidence that the world works this way."  Let's just take what information we have from the video.

First, there is no reason to claim that this would be "impossible to fake."  All you have to do is go to any recent action/adventure movie and consider how easy (albeit not cheap) it is to create completely convincing special effects.  This one -- with shadowy figures disappearing and rematerializing -- would not be difficult at all to a sufficiently skilled video technician.

Second, did you notice the little spinning logo in the lower left?  This is the logo for the owner of the YouTube channel that posted it -- a fellow who goes by the name Cybert9.  So I took a moment to check out other videos he'd posted, and they included:

So I think we have a little problem with source credibility, here.

Then, we have the Chinese characters in the upper right.  Notice those?  I don't read or speak Chinese, so I'm going on second-hand information, but I found that the characters read "Zhu Xian."

Which is the name of a Chinese video production company that specializes in video games.

So, apparently, what we have here is a clip from a promotional video that was taken out of the original context, and launched into the repost network by someone who claimed that it was real.  I'm not saying that Cybert9 was the one who perpetrated the original hoax; it may well be that he was somewhere further down the line, and was taken in like all of the other millions of people who have watched this video.  (There are three versions of the "archangel video" that I found on YouTube, and together they have gotten well over two million total hits.  And while a few commenters seemed to be of the opinion that it was fake, a good many posted comments like, "Wow!  How can this not have been on the news?" and "It looks real to me.  I believe it.")

The whole thing just pisses me off, because, as I said, it's not like there aren't a hundred natural reasons that people believe crazy stuff.  My job as a skeptical writer and critical thinking teacher is hard enough, thanks.  So, to the person who started this hoax, I have only one further thing to say: 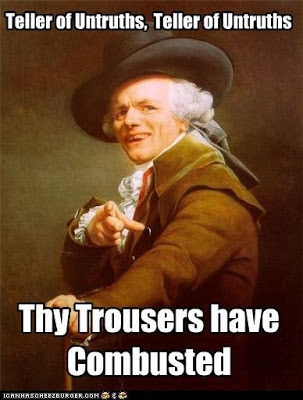 Posted by Gordon Bonnet at 4:40 AM