Over the 26 years that I've been a public school teacher, I've noticed an interesting (and worrisome) phenomenon: some people seem to have no understanding of numbers.

I'm not saying they're bad in math classes.  In my experience, it's not the same thing at all.  These people often can learn to manipulate mathematical expressions by memorizing the rules, similar to the way you might memorize a noun declension pattern if you were learning Latin.  And they can usually use calculators quite well.  But once the calculator spits out a number, they have no idea if it's right, or even sensible.

I saw this more often in my first five years of teaching, when I taught physics in addition to my current subject, biology.  Physics requires a great deal of sometimes abstruse mathematics, and also dealing with quantitative concepts for which most people don't have a good numerical referent (e.g. charge, torque, frequency).  But you would think things like mass and velocity would be easier, right?  I distinctly recall assigning my students a problem in electromagnetic forces, the ultimate aim of which was to have them calculate the mass of an electron.  One young lady came out with 36 kilograms, and called me over to "check to see if it was right."

I looked at her in some disbelief.  I saw what she'd done, and it was a simple goof, the kind any of us could have done; she'd pressed the "divide" key instead of the "multiply" key on her calculator for one of the terms.  What amazed me was that she didn't look at the answer and immediately recognize that it was wrong.  I said to her, "Doesn't that seem a little... massive, for an electron?"

She shrugged and said, "Is it?"

I hasten to add that this was an intelligent, articulate young lady, who actually was trying to understand.  She just seemed unable to look at a number, and recognize if it was in the ballpark based on an understanding of what numbers mean.  There was some quantitative common sense that she apparently lacked.

I've seen many other example of this sort of innumeracy.  The young man in introductory biology class who measured the diameter of an amoeba under a microscope, and came up with "114.7 meters."  A very earnest physics student who calculated the speed of revolution of the Moon around the Earth as 9.6 x 10^7 meters/sec -- just shy of the speed of light.  (And it gives me some cause for concern that this last-mentioned young man was bent on becoming an architect.)

I bring this up because having a sense of quantity is absolutely critical to everyday life.  Even if the majority of us don't need to worry about such things as the mass of an electron, having a general concept of what numbers mean -- not just how to manipulate them -- is pretty important.  But because a lot of people lack this skill, they become much more easily persuadable by bad thinking.  If you throw a statistic, graph, or data set at an innumerate person, they often will accept it without question -- and, worse, they won't recognize it if you're lying to them.

I ran into a particularly egregious example of this in this week's edition of our village's newspaper, The Trumansburg Free Press.  The Trumansburg Free Press costs 75 cents, but I guess the name The Trumansburg Three-Quarters-Of-A-Buck Press does sound a little clunky.  Be that as it may, this week there was an article that caught my eye, because it was about a subject that is near and dear to my heart; the problem of cats, both pet and feral, killing native songbirds.

The author of the article, Glynis Hart, went out of her way to be even-handed and "journalistic," presenting arguments from scientists at the Cornell Laboratory of Ornithology (who, understandably, would like to see pet cats never let outside, and feral cats eliminated as a noxious exotic predator) set against those of groups like Alley Cat Allies, who are supportive of outdoor cats in all forms.  Now, myself, I tend to agree with the former -- and I'm not only a birder but a cat owner.  I just see no earthly reason why cats, which are, after all, an introduced species, should have to go outside.  The toll on native bird species is undeniable -- even if we can quibble about exactly how many birds are killed yearly, and unnecessarily, no one denies that the number is large.

So, anyway, I was reading along, and then I got to the following line:  "Alarmists like to cite cat's [sic] amazing fertility to tell you that one pair of cats can produce another 400,000 in two years."

I had to pick the newspaper up off the floor after reading that.  Now, to her credit, Hart goes on to tell us that this statistic "isn't true," but what she doesn't give you is (1) any idea of how not true this is, and (2) the correct sense, that even the most virulently anti-cat, pro-bird person in the world would never claim such an obviously idiotic statistic.

So, anyhow, I decided to find out how fast cats would have to reproduce in order for two cats to generate a total of 400,000 in two years.

After a bit of number crunching and use of logarithms and scientific calculators, I came up with an answer.  If you assume that every cat mating produces a litter, and each litter is made up of five kittens all of whom survive to adulthood and reproduce themselves, it would take a little less than twelve generations to generate 400,000 cats from one pair.  Cram that into two years, and you're talking about one generation every two months.

Yup.  This would require kittens to go from birth to sexual maturity in a little over eight weeks, which makes me wonder if Ms. Hart has ever actually seen an eight-week-old kitten.  But the problem runs deeper than this, because we're not starting from just two cats in the world.  There are millions of cats already, all apparently reproducing at a rate we more commonly associate with fruit flies.  So if this was true, we would be hip deep in felines, and LOLCats would not be a laughing matter.  It would be viewed more like people now view zombie movies.

"Bolt the front door, and lock up the cabinet with the canned salmon, Edith!  I just looked down Maple Street, and the cats is coming!!!" 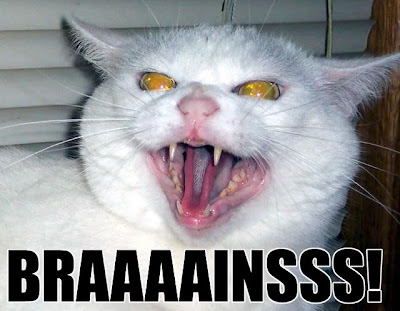 As with my long-ago physics student whose electrons needed to join Weight Watchers, I'm sure Ms. Hart's rapidly reproducing kitties was just due to a simple mistake -- a miscalculation, miscopied number, or the like.  What bothers me is not that she made the error, something any of us can do, but that no one -- not her, not an editor or a proofreader -- caught it, recognized that it was impossible.

And lest you think that such errors have no long-lasting consequences, allow me to point out that the whole idiotic "chemtrails conspiracy" was launched when a reporter at KSLA News (Shreveport, Louisiana) reported that dew collected in bowls after an unusually persistent jet contrail had 6.8 parts per million concentrations of barium -- well into the dangerous zone -- when the actual amount was 68 parts per billion.  Even though they retracted the claim, and publicly stated that the correct figure was a hundred times smaller than their original number, the first value given still is quoted as the real one in conspiracy theory websites.  KSLA was "pressured to change the value" by Evil Government Agents.  And that little numerical slip-up continues to haunt us, lo unto this very day.  [Source]

So, anyway.  I'm not sure what, if anything, we can do about this one.  As I mentioned earlier, the solution isn't in taking more math classes, because taking math -- or even physics -- is no guarantee against trusting whatever comes out of your calculator, whether or not it makes sense or is even in the realm of possibility.  But it does generate one cautionary note: be careful when you're reading anything that uses statistics.  Don't assume that the numbers are telling you what they seem to be -- or that the numbers are even right.  As usual, the watchword around here is to keep your brains engaged.  At least until the Zombie Cats arrive and want to eat them.  After that, you're on your own.