Some days, I simply do not get how woo-woos think.

In some ways, though, I understand them pretty well.  For example, who amongst us has not wished that the world was other than it is?  Telepathy, clairvoyance, psychokinesis, the afterlife, various cryptozoological marvels -- I have felt the attractiveness of all of those, and spent time thinking (and written fiction) about what it would be like if those were real.

But what I don't get is the seemingly complete abandonment of reason that these folks frequently exhibit.  When I am wrong about something, when I am presented with evidence or a logical argument that I am mistaken, I generally acquiesce with an apology.  But these people?

Arguing, I find, simply makes them hold on to whatever their belief is like grim death.

I had an especially vivid demonstration of this yesterday, about a claim last week that the International Space Station had captured footage of a translucent alien creature swimming past, in the depths of space.  [Source]

If you've not seen the video, you should go to the link I posted and check it out.  In my opinion it's a flat hoax, although admittedly it's quite a clever one.  Here's a still of the "creature," in false color and high contrast: 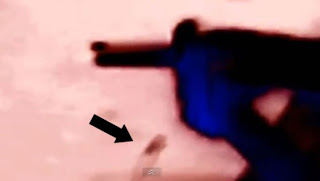 Well, like I said, the whole thing "screamed" hoax at me.  The first thing I noticed was that in the video, the view of the space station seemed "stretched," as if it had been digitally altered.  The footage didn't have the crisp lines that the high-quality cameras aboard the ISS usually provide: 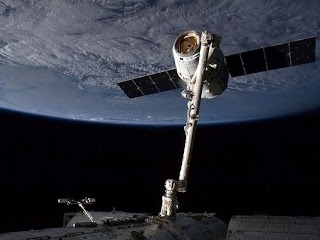 There's also the problem that I'm a biologist, and I happened to recognize the "creature" in the video as being blurred footage of a very terrestrial species.  The whole thing was skilfully done, but no question that it was faked.  So, anyway, when this was posted and a link sent to me by a friend, I went to the site, and then I did what I should never do -- started arguing.  Here's a transcript of the exchange that ensued:

Me:  There are a variety of problems with this footage.  First, notice how the creature is moving.  It clearly has some kind of fins, and is using those and a rippling movement along its body to propel itself.  That wouldn't work in space.

True Believer:  Why not?  How do you know how alien creatures move?

Me:  It has nothing to do with not knowing about aliens.  It has to do with the fact that space is nearly a vacuum, so there's nothing to push against.  That kind of propulsion only works when you're going through a medium at least as dense as water.

TB:  Scientists have proven that all sorts of things exist in space.  Vacuum energy, pair formation, plasma streams, magnetic oscillations.  Space is filled with all those and more.

Me:  You're seriously claiming that you could use scuba fins to swim through a magnetic field?

Me:  I'm not saying aliens as a whole don't exist.  I'm saying this claim of alien life is a hoax.  In any case, I know what this "alien" is, and it's not an alien, unless you could use that word to describe an arctic mollusk.

TB:  What are you talking about?

Me [after brief pause to double-check photos, to see if I was remembering my invertebrate zoology correctly]:  Check out pics of "sea angels" (Clione limacina).  Pretty close match, isn't it?  If you check out vids of sea angels swimming, you'll see what I mean.  It's identical.  Seems clear that the guy who created the video simply overlaid the footage from the space station with a clip of a sea angel swimming.  In any case, it's not an alien, it's a sea slug. 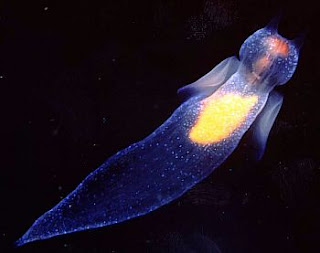 TB:  You're a biologist, and you've never heard of convergent evolution?

Me:  You're seriously claiming that convergent evolution between a space creature and a sea slug explains this better than "it's a hoax?"

TB:  All kinds of similarities crop up because of convergent evolution here on earth.  There's no reason to believe it couldn't happen with alien evolution too.

Me [after swearing profusely at the computer, which of course my opponent couldn't hear]:  Look.  There's also the problem of the source of the video.  This guy, Stephen Hannard -- he posts under "Alien Disclosure Group - UK," and as far as I can tell, he's deranged.

TB:  Name-calling is part of your logical argument,  I see.

Me:  Have you checked out some of his other claims?  Last year he said that the Mars rover had spotted an alien groundhog on Mars, along with a flip-flop and a fossilized finger.

TB:  How do you know that those weren't true?  What proof do you have?

Me:  If I need to prove to you that a vaguely shoe-shaped rock is not a Martian flip-flop, I give up.


So.  Yeah.  Did you notice that every time I presented an argument, he simply dodged it?  This guy has perfected the argument from ignorance -- if we don't know what something is, it must be _____ (fill in the blank with: aliens, Bigfoot, ghosts, angels, whatever).  Once you accept that fallacious stance as logical, you become impossible to argue with.  Any evidence to the contrary is simply looked upon as special pleading, or (as with my pointing out that the "alien creature" was actually footage of a terrestrial sea slug), more support that your stance was right in the first place.

Anyhow, that's today's exercise in frustration.  And I need to stop getting drawn into online arguments, my blood pressure is high enough as it is.  But if you see the "alien creature swimming past the ISS" posted somewhere, I encourage you to post a comment with this link.  After all, if they want to argue, they can argue with you for a change.
Posted by Gordon Bonnet at 2:41 AM