The case of the telepathic mice

One area in which a lot of people could use some work is in how to draw logical connections.

It's not that it's necessarily that simple.  Given a lot of facts, the question, "Now what does this all mean?" can be decidedly non-trivial.  After all, if it were trivial, there would be only one political party, and the only job we skeptics would have would be uncovering what the facts actually are.  The deductive work, the drawing of a conclusion, would be quick and unanimous, and Washington DC would be a decidedly more congenial place.

To take a rather simpler example, let's look at the following picture, that's been making the rounds of the social network lately: 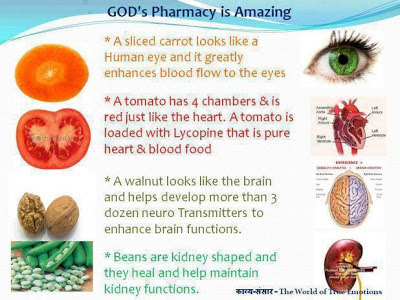 Even ignoring the rather dubious religious aspect, this seems to me to be a rather ridiculous conclusion.  Just because these foods vaguely resemble a human organ (really vaguely, in the case of the tomato and the heart), is their supposed beneficial effect on that organ why they look that way?  It doesn't take a rocket scientist, nor a botanist, to find a dozen counter-examples, of plants that look like a human organ, but which have no beneficial effects on that organ whatsoever.  (This whole idea goes back to medieval times, when it was known as the "Doctrine of Similars."  It's why so many plants' names end in "-wort" -- wyrt was Old English for "plant," and the doctors of that time, whom we must hope had their malpractice insurance paid up, used lungwort, liverwort, spleenwort, and the rest to try to cure their patients.  No wonder the life expectancy back then was so low.)

On the other hand, Amanita mushrooms look a little like a penis, and if you eat one, you're fucked.  So maybe there's something to this after all.

In any case, let's move on to something a little trickier -- last week's story of the telepathic mice.

Miguel Nicolelis, of Duke University, announced last week that he'd been able to accomplish something that no one had done -- to create a device that allowed the electrical firings in one brain (in this case, a mouse) to be beamed to another brain, influencing that brain's firing.  In his paper, released in Nature, Nicolelis and his team describe engineering microelectrodes that were then implanted in the primary motor cortex of mouse #1.  These electrodes are capable of detecting the neural firing pattern in the mouse's brain -- specifically, to determine which of a pair of levers the mouse selected to pull.  A second mouse has a different set of implants -- one which stimulate neurons.  If mouse #1 pulls the right hand lever, and mouse #2 does, too, they both get a treat.  They can't see each other -- but the electrodes in the brain of mouse #1 sends a signal, via the electrode array, to the electrodes in the brain of mouse #2, stimulating it to choose the correct lever.

Direct, brain-to-brain communication.  Obvious application to medicine... and the military.  But my problem is how it's been described in popular media.  Everyone's calling it "telepathy" -- making a number of psychic websites erupt in excited backslapping, claiming that this "scientifically proves telepathy to be real."  "They just showed what we've been claiming for decades," one thrilled woo-woo stated.

The problem is -- is this actually telepathy?  Well, in one limited sense, yes; the word, after all, comes from the Greek tele (distant) + pathéia (feeling).  So, yes, the mice were able to feel, or at least communicate, at a distance.  But remember that the only reason it worked was that both the encoder and the decoder mouse had electrode arrays stuck into their brains.  There's an understood mechanism at work here; Nicolelis knows exactly how the signal from mouse #1 got to mouse #2 and stimulated its brain to perform the task correctly.  This is in exact opposition to the usual claims of telepathy -- that somehow (no mechanism specified) one human brain can pick up information from another, sometimes over great distances.  Complex information, too; not just enough to know which lever to choose, but whole conversations, visual images, sounds, and emotions.

Oh, and some people think they can get into telepathic contact with their pets.  Which adds a whole new level of craziness to the claim.

So, actually, what Nicolelis got his mice to do isn't telepathy at all, at least not in the usual sense of the word.  But on a surface read, it would be easy to miss the difference, to see why (in fact) his experiment makes the claims of the telepaths less likely, not more.  If it takes fancy arrays of electrodes to allow the transmission of even the simplest of information, how on earth could two brains communicate far more complex information, without any help at all?  Add that to the fact that there has not been a single experiment that has conclusively demonstrated that telepathy, as advertised, actually exists (for an excellent, and unbiased, overview of the history of telepathy experiments, go here).  It seems very likely, just based on the evidence, that telepathy doesn't exist -- not between Nicolelis' mice, and certainly not between humans.

Just as well, really.  I'd really rather people not read my mind.  For one thing, my brain can be a little... distractible: 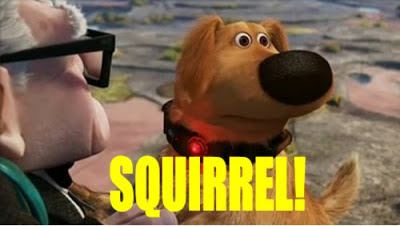 Most days, reading my mind would be the telepathic equivalent of riding the Tilt-o-Whirl.  So probably better that my thoughts remain where they are, bouncing randomly off the inside of my skull as usual.
Posted by Gordon Bonnet at 2:44 AM