There's a story developing in California that has me casting a wary but curious eye in that direction.

Joseph Mastropaolo, a former biomechanics and kinesiology teacher who "found Jesus" and gave up his career to advocate for various young-earth creationist causes, has dreamed up a contest in which a YEC/anti-evolution proponent and a proponent of science and evolution would each pony up $10,000, and would then present their positions (and evidence) before a judge.  (Mastropaolo has said that he himself will fund the YEC proponent's ante.)  The judge would decide whose case merited the win, and the victor walks away with the whole $20,000.

My first thought was, "What a nitwit.  I hope he has $10,000 to lose."  The weaker sister to creationism -- intelligent design -- has already gone to trial, in 2005, in the Kitzmiller vs. the Dover Area School Board case, and even it was found to be a stance that in the words of Judge John E. Jones III, who decided the case, was "breathtakingly inane."  He said, in his decision,


ID's backers have sought to avoid the scientific scrutiny which we have now determined that it cannot withstand by advocating that the controversy, but not ID itself, should be taught in science class. This tactic is at best disingenuous, and at worst a canard. The goal of the IDM is not to encourage critical thought, but to foment a revolution which would supplant evolutionary theory with ID.

Couple this with the fact that "religious freedom" statutes, which would coerce teachers to give "alternate explanations" to evolution in biology classes, have been found unconstitutional every time they have come to trial, and Mastropaolo's idea seems like a good way to lose $10,000.

But I wonder if it'll be that easy.  According to the rules of the game, the goal is to pit a "literal Genesis advocate" against a "non-literal Genesis advocate."  In other words, people like me, who consider the Book of Genesis mythology (i.e., false), might be excluded from the outset, because I don't advocate for the Bible at all, either literally or non-literally.

Second, the two have to agree on the judge.  This may or may not be a problem; for example, in the Dover case, Judge Jones is a self-professed "Republican and Christian," and yet he still decided against the School Board in his decision.

Third, and more troubling, is the requirement in the rules that the "non-literal Genesis advocate" prove his/her case before the judge, using "objective, valid, reliable, and calibrated" evidence.  This would seem immediately to favor the advocate of science, given that the amount of reliable evidence that supports young-earth creationism is exactly zero.  But the problem, I believe, hinges on the word "prove."  When is a scientific theory proven?  The rather facile answer is "never;" as a possibly apocryphal quote from Einstein goes, "A thousand experiments could never prove me right, but one could prove me wrong."  Theories are supported, but are always subject to revision with better data -- one of the strengths of science.  Proof, in the sense that we prove a theorem in trigonometry, is out of reach of the inductive scientific method.

So I can easily see the case going something like this:

Scientist:  But what about radioactive dating?  The geologists and paleontologists have calibrated radioactive decay rates, and they all agree with each other.

Creationist:  If all of the decay rates are changing simultaneously, the fact that they're calibrated against each other means nothing.  If everything in the world were expanding, including the meter sticks, you'd have no way to tell.  So again, the rate of decay could have been different in the past, just like the speed of light.

Creationist:  All created that way by God.

Creationist (smugly):  That's microevolution, not macroevolution.  There are no intermediate forms, and no changes in "type."  Show me something halfway between a dog and rabbit, and I might be convinced. 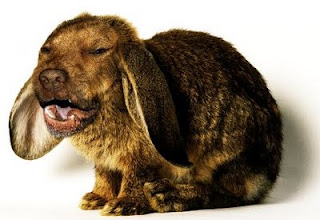 So, I think the whole thing might hinge on some judge demanding that the scientist (or "non-literal Genesis advocate," or whatever) be able to come up with evidence to meet every potential objection that the creationist could bring up.  This, of course, isn't possible, because the creationist just has to fall back on "god did it that way," to which there's no possible scientific answer.  (And lest you think that I'm joking about how ridiculous this can get, the picture I linked above came from a creationist site, Fish With Trish, wherein we find out that supposedly evolutionists believe in transitional forms like the "doggit (a mix between a dog and a rabbit)," and that "the purpose of fossils is to speak about death and God's judgment.")

So, I can easily see the whole thing going awry -- not because there's any chance that evolution is wrong and creationism is right, but because proponents of science and religion essentially don't speak the same language.  Their standards of evidence and proof differ; their understanding of how we know something is true or false differs; their entire way of comprehending the world differs.  It is to be hoped that a judge would side with reason, but I'm not confident enough of it to risk $10,000.

So, it'll be interesting to see what will happen.  A couple of the skeptical sites I frequent had folks pawing at the ground saying, "Lemme at him!"  So maybe someone will take the bait.  Myself, I'm not entirely sure that's a good thing.  But in my optimistic moments, I can see such a trial going very right -- which would certainly be a victory to celebrate.
Posted by Gordon Bonnet at 2:57 AM