The shield of intolerance

It's time people stop getting a Get-Out-of-Jail-Free card for acting like assholes as long as they say, "I'm doing this because of my religion."

I say this because of two bills that have come up nearly simultaneously -- hardly a coincidence -- in Kentucky and Tennessee.  The Kentucky bill, House Bill 279, allows "sincerely held religious beliefs" to trump anti-discrimination laws.  In Tennessee, Senate Bill 514 allows graduate students in social work, counseling, or psychology to refuse to serve individuals as part of their practicum if to do so runs counter to their "deeply held religious beliefs."  And even though neither bill says so in so many words, no one is in the least doubt about which group these bills are targeting -- the same group that has been the target of religious-based discrimination for as long as I can remember.  (Add that to the "Don't Say Gay" bill in Tennessee, still on the books, that prohibits teachers and other school staff from discussing homosexuality in public schools -- and which, in one interpretation, would allow school staff to "out" LGBT students to their parents against their wills.)

At what point do rational individuals have to simply stand up and say "enough?"  No, you can no longer hide behind the shield of your religion in order to justify your intolerance, narrow-mindedness, hatred, ignorance, and bigotry.  No, you can not simply choose to ignore overwhelming evidence from scientific research that homosexuality is an innate characteristic, and that calling it a "lifestyle choice" is about as sensible as using that term to describe my blond hair and blue eyes.  No, you can no longer use your leverage as a Religious Person to ramrod your beliefs into law in a country where church and state are supposed to be separate.

Yes, I know all religious people aren't like that.  But too many of the ones who aren't are content to let the ones who are speak for the whole.  And it's not just Christianity; Religion as a whole, capital "R," has a hell of a lot to answer for.  If we're looking to point fingers, we can't forget Islam, whose apologists keep calling it "a religion of peace," but whose most ardent practitioners burn down the houses of people with different beliefs because they're "blasphemers."  Whose scholars sent a professor of Islamic Studies to a talk at University College - London -- and the professor refused to speak unless the audience was segregated by gender.  Whose government leaders have condoned the flogging of a 15-year-old girl with a hundred lashes because she had premarital sex -- when she was actually raped repeatedly by her stepfather.

I wonder how much more it will take.  What further atrocities will have to happen before a majority of the people in this world have had enough?  I mean, you don't have to be a rocket scientist to see what the fanatic fringe of religion is capable of.  These are the folks who created a reign of terror in northern Mali, an atrocity that we are only now beginning to understand.  They are the ones who killed tens of thousands of "heretics" -- many of them after horrific torture -- during the European Middle Ages.  They are the ones who destroyed the heritage of whole cultures in the name of sanctity -- the Bamiyan Buddhas, the quipus of the Inca, the priceless scrolls and books in the Library of Alexandria.

They are the ones who flew fully-loaded jet airplanes into the World Trade Center and Pentagon.

I wish that the kind, rational, sensible, and compassionate people on the Earth -- whom I fervently, desperately believe are the majority -- would stand up and say to these lunatics, "You had your shot at ruling the world.  The time when religion drove the rule of law is over -- and, by the way, it is no coincidence that it was called 'the Dark Ages.'"  I wish they would say, "You are free to worship whomever you please, and engage in whatever rituals you choose -- in your churches, mosques, synagogues, and temples.  But you cannot any longer take those institutions and try to remold nations in their image.  You cannot any longer use your religious ideology to justify making an entire segment of society walk in fear."

And if they can't say that, I wish that enough of them would simply say, "You don't speak for me."

But I am afraid that day is not today.  For now, the bigots are still in ascendancy.  39 states in the United States, for example, specifically prohibit same-sex marriage -- thirty in their constitutions, and nine by statute.  All of these laws are religiously motivated, even if it's cast otherwise -- as if the rights of heterosexual married couples are somehow threatened by granting gays and lesbians the right to marry. 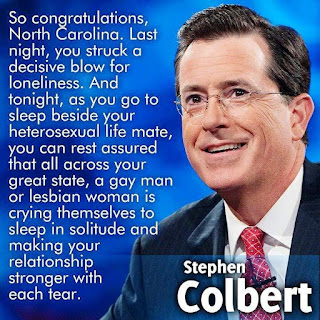 To sum up: how dare you act as if your way of life is ever threatened by offering the same rights you have enjoyed your entire damned life to someone else.