The trials and tribulations of Pope Francis

I have it on good authority that the new pope, Francis I, is either a spy in league with extraterrestrials, or else is an emissary of the Antichrist who will oversee the destruction of Rome.  Or possibly both at the same time.  It's hard to tell, frankly, because my source for this, an article called "Pope Francis: His Jesuitical, Extraterrestrial, 'False Prophet,' and Political Identities," doesn't seem all that certain itself.

And I have to admit that "good authority" may be a bit of an exaggeration, here.  This article was authored by none other than Alfred Lambremont Webre, who has previously claimed that President Obama has visited Mars, that the Earth would be bombarded by "fourth dimensional energy" on November 11, 2011 resulting in all of us being able to engage in "fourth dimensional sex," and that there is a brown dwarf star on the way that will reach its closest approach this year in July and which will trigger "massive electrical discharges" that will result in a catastrophic flood.  (None of us can see the approach of the star except for Alfred, apparently, because the government is hiding its approach from us with chemtrails.  He himself saw it using a "chronovisor," which is a machine that allows him to see the future.)

So, as you can see, he's not exactly the most credible witness right from the get-go.  Be that as it may, let's give him a chance, and hear what he has to say in his rambling diatribe.  Um, article.

Well, first, we have the obvious relevance of the date Pope Francis was elected:


March 13, 2013, the date of Pope Francis I nomination, was the 16th anniversary of the Phoenix Light, a massive space craft that overflew Phoenix, AZ. on March 13, 1997. March 13, 1997 is a significant event in the Exopolitical community that follows the Extraterrestrial presence on Earth.

Don't expect me to believe that's a coincidence.  Alfred either.  You just know that the College of Cardinals was sitting there, on the first day of the conclave, and one of them said, "Hang on... let's wait till tomorrow to decide.  Because then we'll be voting him in on the sixteenth anniversary of a random UFO sighting.  That will send a message, won't it?"  And all of the other cardinals said, "Amen, Your Holy Eminence, that sounds like a dandy idea."

Then, we have a bit about the "Prophecies of St. Malachy," about which I've previously written.  The last pope in the prophecies was one "Petrus Romanus" (Peter the Roman), who was supposed to be the Antichrist's right-hand man, and was going to be in charge of the church during the Tribulation.  So, there's lots of speculation as to whether Pope Francis is actually Petrus Romanus, even though he's not really Peter from Rome, he's Jorge from Argentina.  But hey, close enough, right?  After all, Alfred doesn't even touch on a much greater likelihood, which is that Pope Francis is actually George Bluth from Arrested Development: 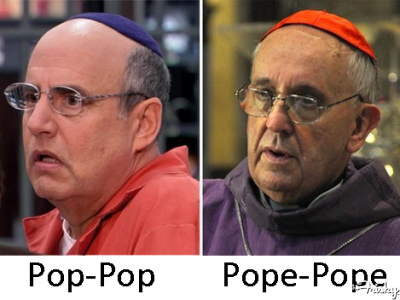 Then we have a long, confusing bit about how Pope Francis, in his previous life as Cardinal Jorge Bergoglio, was a Jesuit.  First of all, the Jesuits are somehow connected with research into extraterrestrials, so that's significant.  Don't ask me how.  Secondly, we all know how the Jesuits are an evil secret organization bent on world domination.  Alfred then tells us all about the "Jesuit Oath," which includes the following lovely passage:


[I] declare and swear that His Holiness, the Pope, is Christ's Vice-Regent and is the true and only head of the Catholic or Universal Church throughout the earth; and that by the virtue of the keys of binding and loosing given to His Holiness by my Saviour, Jesus Christ, he hath power to depose heretical Kings, Princes, States, Commonwealths, and Governments, and they may be safely destroyed. Therefore to the utmost of my power I will defend this doctrine and His Holiness's right and custom against all usurpers of the heretical or Protestant authority whatever, especially the Lutheran Church of Germany, Holland, Denmark, Sweden and Norway, and the now pretended authority and Churches of England and Scotland, and the branches of same now established in Ireland and on the continent of America and elsewhere and all adherents in regard that they may be usurped and heretical, opposing the sacred Mother Church of Rome. I do now denounce and disown any allegiance as due to any heretical king, prince or State, named Protestant or Liberal, or obedience to any of their laws, magistrates or officers. I do further declare the doctrine of the Churches of England and Scotland of the Calvinists, Huguenots, and others of the name of Protestants or Masons to be damnable, and they themselves to be damned who will not forsake the same.

The problem is, the "Jesuit Oath" is a hoax.  It was a bit of anti-Catholic vitriol passed around by Protestant fear-mongers in the early 20th century (the same era that produced the anti-Semitic Protocols of the Elders of Zion).  So, really, these two pieces of nasty nonsense constitute two of the first-ever-recorded conspiracy theories.  The evil Catholics are trying to destroy the world!  No, wait, it's the Jews!  No, wait, its both!

In any case, the whole thing is wrapped up with aliens, somehow.  In a passage that should be enshrined forever in the Annals of WTF, Alfred writes:


One hermeneutical interpretation would have "the dragon" of the Book of Revelations identified as "Extraterrestrial civilizations that the False Prophet (putatively Pope Francis I) promotes to humanity. This role of a Jesuit Pope, promoting "Official ET Disclosure" along with other major institutions such as the United Nations and the major space-faring and extraterrestrial knowledgeable nations such as the United States, the United Kingdom, Russia, and China, would certainly fulfill one dystopian view of extraterrestrial "Disclosure", that of a false flag extraterrestrial invasion such as was predicted by Dr. Wernher von Btraun [sic] on his death bed and related to Disclosure Project witness Dr. Carol Rosin.

So.  Anyway.  I know that regular readers of this blog know me well enough to realize that I'm very far from a Catholic apologist.  I think a lot of the Vatican's policies are repressive, backwards, and medieval, and there's no indication that Pope Francis is anything but a party liner in this regard.  And there are, apparently, some questions to be asked about the new pope's past, especially his alleged complicity with abuses by the military junta that ruled Argentina between 1976 and 1983.  But other than that -- for cryin' in the sink, leave the poor guy alone.  He's barely had a chance to do anything yet, good or bad.  It seems a little premature to conclude that he's going to sell us out to the extraterrestrials.  Or the Antichrist.  Or the evil Jesuits.  Or whoever.  My guess is that he'll just continue the same policies of the last pope, pretty much, and things will go on in the church as they always have.

So, anyway, I'm willing to give the guy the benefit of the doubt for the time being.  And given that I'm an atheist, I think that's pretty generous, don't you?
Posted by Gordon Bonnet at 2:54 AM