Two views of the world

A couple of days ago, I got an email from a reader that was long enough that I won't include the whole thing here, but the gist of it was that I was a narrow-minded stick-in-the-mud old git who was willfully blinding himself to the majesty of the universe because I was determined to hang on to my dusty, provincial scientific view of things.  Here's the end of the email:

You think you have everything explained, but here's the funny thing: you're wearing blinders and you don't even know it.  You see the little bit that's right in front of you, what's under your microscope, and you believe you know it all.  But you're missing out on most of what our awesome universe has to say.  I've read some of your writing and I have to say that I'm probably not going to convince you, but I felt moved to write to you and maybe my words will create a tiny crack in your armor - and through that crack, some light might leak through.

Well, first, I don't think I have everything explained.  You seem to be confusing me with religious people.  The scientific view is constantly expanding, constantly breaking new ground -- and constantly revising what we thought we understood, when new data is uncovered.  In other words: science both grows and self-corrects.  So, in one sense, you're right; there is a lot of stuff out there that science hasn't reached yet.  If there weren't, scientists would be out of a job.

But then, to cap it off, the writer ends with:


I am sending along some websites that may help you in your journey, as they helped me.  I would encourage you to read them open-minded, and not immediately dismiss what these Teachers have to say.  You may be surprised at what you learn.

And the first website was an article by none other than our friend, Skeptophilia frequent flyer...

So.  Yeah.  To be fair, I had to read the article the email writer recommended, and it's a doozie.  Called "Is There A Place Called Other-Earth Composed of Dark Matter and Dark Plasma?", this pinnacle of scientific research includes passages such as the following:


There are growing alarm bells and/or utter wonderment in theoretical physics that dark matter could have nurtured and evolved life, just as visible matter on Earth has done. No one knows at this point if beings of Other-Earth might be able to perceive us. Have they always been aware of us visible folk? Do they even have eyes? I am getting ahead of myself.

Actually, no, Ms. Tessman, no theoretical physicist I've ever heard of has any such "wonderment."  Dark matter has still yet to be detected, and whatever it is, it seems not to interact much with anything.  So an entire freakin' planet made of it, with living things and eyes and everything, is kind of beyond the scope of science at the moment.

She ends the article with a few questions:


Might parallel Dark Earth be the world of the after-life?

Do dark plasma beings form symbiotic, even spiritual relationships with counterpart humans? Might they guide the consciousness of a human after death? Might they be our elusive angels?

Are some Other-Earth beings evil or at least cold scientists who might abduct and capture a “dense being” for an hour?

Is this the source of Jinns? These illusive life-forms have always been thought to be from “ultra-terrestrial Earth.” Jinns and ghosts are thought to pass through walls, being less-dense molecularly than we are. UFOs blink out of existence; do they return simply to Other-Earth?

Is Other-Earth the source of space and atmospheric critters and bright colored orbs which sometimes have a translucent quality?

Do our dark cousins read our thought vibrations as they come closer, and thus become what we can understand? In other words, do they “arrive” as a ball of plasma and become an angel, ghost, or UFO for our perception and benefit?

So, let me get this straight: you postulate a planet that no one has ever seen, made of a type of matter no one has yet detected, and you're using it to explain phenomena for which there is no scientific evidence?  That's like my claiming that there are no ghosts in my house because they were all chased off by a magic invisible unicorn, and expecting people not to come after me with horse tranquilizers.

Okay, maybe I'm being closed-minded, as the individual who emailed me said, but it seems to me that to swallow this stuff you'd have to be open-minded to the extent that your brains fell out.

So, anyway.  Sorry to say, Writer-of-the-Anonymous-Email, but you're right; I'm not shifting my stance.  Science remains our best way of knowing the universe -- maybe the only way.  My evidence: it works.  As far as Diane Tessman and others like her, what it seems to me is that they're just really good at making shit up, and peppering it here and there with science-y words to give it some legitimacy in the eyes of people who can't be bothered to learn the actual science.  Let me just end with a recommendation to any of you who are swayed by such fuzzy, non-scientific views of the world, who think that these views are somehow grander and more beautiful than what science has to offer; do yourself a favor, and sign up for a college-level class in real science.  Find out how dazzling, how awe-inspiring, the world actually is.  Then, and only then, compare the two views, and see which is more appealing -- to invent pleasant-sounding falsehoods and convince yourself that they are true, or to learn the rules by which the universe actually operates.  I'll just end with a quote from Sagan: 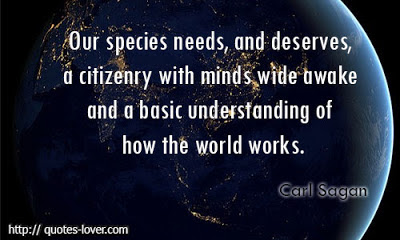