Last week, the Springboro (Ohio) City Community School District announced that they are considering a policy that would "encourage students to 'think critically' about 'controversial' issues like evolution, abortion, climate change, UN Agenda 21 and sustainable development. The policy directs teachers to fully explore 'all sides' of these issues."

To take the two pieces of the proposed policy that I actually know enough to comment on, there is no controversy in scientific circles about evolution and climate change -- a point I have made often enough that I don't see the need to defend it further here.

What makes this situation interesting was something that appeared on Reddit yesterday -- a back-and-forth email exchange between an Ohio resident who is outraged by the policy, and Kelly Kohls, president of the Springboro School Board.  I quote the posted emails below:

As someone who grew up in Cincinnati during the 70s and 80s, I well remember the attempts to bring religious teachings into the classroom. As it has been ruled clearly unconstitutional many times, you are merely wasting time and resources better spent on actually helping children of your school district. Please keep religion at home or in your houses of worship. It has no place in a science classroom. There is no scientific controversy with respect to Evolution except within the ranks of the fundamentalists.
In case you or your board are unsure about the legal precedents, please see:
Epperson v. Arkansas (1968)
Segraves v State of California (1981)
McLean v Arkansas BOE (1982)
Edwards v. Aguillard (1897)
Webster v New Lenox (1990)
Peloza v Capistrano (1994)
Freiler v Tangipahoa Paris BOE (1997) - this one SPECIFICALLY mentions "critical thinking" by the way, and calls it what it is, a ruse.
Kitzmiller v. Dover (2005)
There are more but I think you get my point.
Please, please, please...focus on facts. You are educators. You should act like it.
Thank you for your time,

Ms. Kohls responded as follows.  I would run out of "sics" so you'll just have to keep in mind that this is verbatim:


Please read the rulings, they are not saying unconstitutional or illegal. Please also go to the Discovery Institute and view the science the blows gigantic wholes in Evolution. I also went to school in the 70's and 80 and and do not agree with you.

Please focus on the facts and read the rulings for yourself.

The original poster, in apparent bafflement at getting a response from a school board president that barely qualified as English, wrote back the following:

I'm, first of all, surprised that you would actually cite The Discovery Institute, which is clearly a heavily biased lobbying group and advances only one view, the completely unscientific concept of creationism.

Second, you ask me to "read the rulings", which I have. I would not have cited the cases if I hadn't. Granted, in some cases, it may have been a lower court ruling which may not be citable in a higher court but, and I know you know this, the Circuit Court or the Supreme Court cases clearly define constitutionality. In no case did creationists prevail. This should be of particular interest and goes back to my earlier point that this attempt to inject religion into a secular environment is futile at best, and ultimately harmful to the students in your district.

Let me address your points one by one, and, while I grant that not every case was lifted to the Supreme Court, creationism was never upheld and religious rights were never violated by the teaching of evolution:

"they are not saying unconstitutional or illegal"
I'll just start at the first three...
Epperson v. Arkansas - The U.S Supreme Court found that, ultimately, it was unconstitutional. The Arkansas Supreme Court ruling was overturned by the US Supreme Court. "The vigilant protection of constitutional freedoms is nowhere more vital than in the community of American schools." Please note the use of the word "constitutional".
Segraves v State of California - Summarized as "learning about evolution in public schools does not infringe upon the free exercise of religion." Your First Amendment rights are not violated. Note that if you teach the Christian version, you then automatically violate the rights of people of other religions.
McLean v Arkansas - "the Act was passed with the specific purpose by the General Assembly of advancing religion," which violates the First Amendment.

"I also went to school in the 70's and 80 and and do not agree with you"
Whether or not you agree with me is not the issue here. The issue is Constitutionality. On this point, you are already at a disadvantage. I am unclear why you think you can overturn decades of previous rulings.
Would you like me to continue or do you understand that your "facts" are not, in any way, facts.

"blows gigantic wholes in Evolution"
Honestly, I'm appalled that in your reply, you, as an educator, did not even know the difference between "whole" and "hole". Now, I know this is not a specific refutation of your argument and normally I would have overlooked it, but you are on the Board of Education. By now, I would have hoped that the simple act of proof-reading would have been second nature.

This is a battle which you will not win. Again, you are welcome to your beliefs, but keep them out of the classroom unless you are willing to allow scientists into your church to "teach the controversy".

At this point Ms. Kohls had evidently had enough of Mr. Thomas and his damn logical, rational thinking, because she sent back a one liner:


Thanks for your opinion and I respectfully disagree.

I, too, thought it was interesting that she would immediately blow her cover and mention the Discovery Institute, the Seattle-based "think tank" (although I use that phrase with some reluctance) that has championed forcing Christian intelligent design and climate change denialism into public school curricula.  They are adamant especially about the former, and more than one of the posts on the Institute website tears into the idea of abiogenesis, stating that the origins of life required a "skilled technical chemist" -- i.e., a deity who got life going.

Fine.  God started life, did he?  I'll be sure to teach that next year in my biology classes.  The problem is, which Scientific Theory of God do you want me to use?  Intelligent designers abound in the mythology of humanity.  We have more than a few to choose from:


The first humans were generated by the Sky (Marduk) having sex with the Earth (Tiamat).  [Babylonian]

The Earth is made of the dead body of a frost giant, and the first humans were carved out of logs.  [Norse]

Dry land was formed by a deity (Izanagi) stirring the Celestial Sea with his spear.  The first humans were the children of Izanagi by his wife (Izanami), but she had also previously given birth to a leech, a floating island, and a child who was on fire, which musta hurt like hell.  [Japanese] 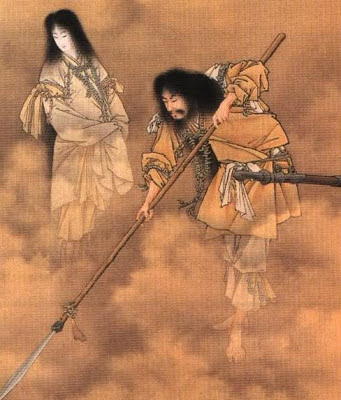 The first people were made out of rocks and minerals by a god called "Black Hactcin."  [Jicarilla Apache]

The first life was created out of pond muck by a guy named Obatala.  Some of the weirder-looking creatures in the world were made while Obatala was drunk, which I would expect accounts for the duck-billed platypus.  [Yoruba]


So, anyhow.  I'd guess that Mr. Thomas is right, and that this latest assault on science is doomed to fail, but for cryin' in the sink, it does get tiresome fighting the same battles over and over again.  In any case, keep your eye on Ohio.  As for me, I'm off to go prepare my lesson on how the different races of humans came about because a god named "Kche Mnedo" didn't bake some of them long enough, and the half-baked ones came out as white people.
Posted by Gordon Bonnet at 3:04 AM