Magic in the water

It's always struck me as baffling to see people how much people will pay for woo-woo stuff.  Not so much the alt-med stuff like homeopathy, because there, the recipient has been bamboozled (usually via some science-y sounding nonsense about vibrations and energies and quantum signatures) into thinking that the remedy being sold actually does something that has been verified experimentally.  (i.e., they have been lied to.)

On the other hand, it's less understandable to see someone buying something that doesn't even come with any sort of rational explanation -- when the item being sold falls into the Magic, Pure & Simple department.  It's probably narrow-minded of me, but whenever I hear about this sort of thing, I always think, "How on earth do people expect this to work?"

For example, there's Temitope Balogun Joshua, the Ghanaian pastor of the Synagogue Church of All Nations in Accra.  Joshua, a charismatic figure who attracts huge crowds in Ghana, Nigeria, Benin, and Togo, goes about preaching the gospel and selling stuff, including "new anointing water."  "New anointing water" has been blessed by Reverend Joshua and has been credited with miraculous cures of diseases, and the relieving of stress and anxiety.  It usually sells for 80 cedis (about $40) per bottle -- a sizable sum in West Africa. 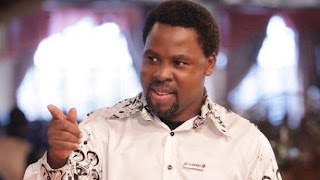 Well, unfortunately, a radio station announced last Saturday that Reverend Joshua would be giving away bottles of "new anointing water" for free at the service on Sunday.  Crowds began to form at two in the morning.  So many people showed up that it "brought traffic in large parts of Accra to a standstill."  And then, when the doors opened, there was a stampede, which killed four and injured thirty.

Joshua himself was apparently upset by how the whole thing turned out, and he's promised to pay the hospital expenses of the ones who were injured.  This shouldn't be a hardship...

... because apparently his net worth exceeds $15 million.  That, my friends, is a crapload of bottles of water.

Now, it's not that I think this kind of magical thinking is uncommon, mind you.  After outlaw John Dillinger was gunned down, bystanders soaked handkerchiefs and the hems of skirts in his blood.  Earlier, men and women who met their end by losing their heads had their spilled blood treated the same way -- notable examples were Anne Boleyn and King Louis XVI.  The idea of magic (of various kinds) clinging to a substance, be it water, blood, or something else, is as old as humanity.

But still.  How, precisely, do these folks think Reverend Joshua's bottles of miracle water can work?  I know I'm approaching this from my squared-off, show-me-the-goods rationalism, and that the mystical worldview allows for all sorts of other stuff going on.  But try as I might, I just can't see how this guy's magic potions and preaching have made him worth $15 million, despite his hawking his wares in some of the poorest countries in the world.

Magical thinking, apparently, is big business, even if you don't resort to science-y words.

On a more hopeful note, though, is a second story, this one from Spain.

Another idea that is hardly new is the love spell -- magic cast to make the target of your amorous feelings fall in love with you, or (more prosaically) at least willing to have sex with you.  Like Reverend Joshua's magic water, this one is still with us today, and is still as ineffective as ever -- as Zaragoza businessman José Laparra found out.

Laparra, the owner of Spanish football team Club Deportivo Castellon, had his eye on a woman who evidently was resistant to his advances.  Frustrated, he went to a psychic, Lucia Martin, who said she would help him -- if he paid her $210,000.

Now that is desperation.

Be that as it may, Martin said she knew the very spell, and she took Laparra's money, and proceeded to do her magical stuff.  To no avail; Laparra was no more successful than before.  So he went to Martin, and demanded his money back.

Only fair, I suppose, but according to the source, the psychic "foresaw his arrival" and tried to prevent him from entering.  She called the police, who came in, and found the money wrapped up in a newspaper -- and promptly arrested Laparra, because he'd apparently paid the psychic by embezzling the money from the funds belonging to his football club.

Laparra, for his part, proceeded to have an "anxiety attack," which is hardly a surprise, considering the circumstances.  Maybe someone should have gotten him some "new anointing water."
Posted by Gordon Bonnet at 2:57 AM