The "honey trap," perception, and our sense of self

I think the human brain is fascinating.  Not a surprising statement, I suppose, coming from someone who teaches (amongst other things) an introductory neurology course.  What intrigues me most, though, is the way all of this rock-solid sense of self we all have -- the sum of our perceptions, attitudes, experiences, and memories -- is the result of a bunch of chemicals jittering around in 1.3 kilograms of skull-glop, and an electrical output that would only be sufficient to illuminate a twenty-watt light bulb.

And if that's not humbling enough, our personalities may not be as rock-solid as all that.  If something changes the chemistry or the pattern of electrical firings in your brain, who you are and what you experience changes.  As my long-ago physiology professor said, "In a very real way, your brain is the only sensory organ you have.  If your brain gets tricked, that is what you think you've seen, or heard, or felt."

It works all the way up to the level of our emotions and personality, too -- realms of the human experience that are supposed to be somehow "different."  Okay, we can accept it when a drug makes you hallucinate; that's just the brain's neural firings being altered.  But our attitudes, biases, preferences, emotional reactions -- no, that's something else entirely.  Those are all part of this "me" that is independent of the "meat machine" in my skull, this spiritual entity that is separate from mere biochemistry, a personal being that can well be imagined going on after the animal part dies.

Eight scientists in the Department of Human Environment Studies at Kyushu University in Japan have just punched another hole in this belief, with a paper that appeared in Nature last week entitled, "Minocycline, a microglial inhibitor, reduces 'honey trap' risk in human economic exchange."  In this study, Motoki Watabe et al. had observed that minocycline, a tetracycline-derivative antibiotic, had not only been useful for fighting infections but had led to improvement in psychological disorders in patients who were taking it.  In particular, taking minocycline seemed to improve patient's capacity for "sober decision-making."  So the group at Kyushu University decided to see if they could pinpoint what, exactly, was changing in the brain of a person on minocycline.

The results were, to say the least, eye-opening.

It's long been known that human males tend to trust physically attractive females, sometimes leading to their betrayal -- a tendency called the "honey trap" that has been used as a plot twist in hundreds of thrillers, all the way back to Milady Winter and d'Artagnan in The Three Musketeers. 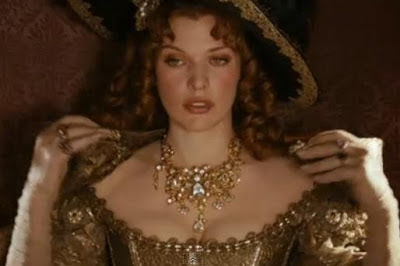 Well, the "honey trap" response vanishes in men on minocycline.

The men in the experiment were split into two groups -- one group got the antibiotic, the others a placebo.  None knew which they'd gotten:


In this experiment, 98 healthy males played a trust game with 8 photographed young females after a 4-day oral treatment course of either minocycline or placebo. Looking at a picture showing a female's face, male players decided how much out of 1300 yen (approximately 13 USD) they would give to each female. Males then evaluated how trustworthy each female was and how physically attractive she was using a 11-point Likert Scale (0: Not at all – 10: Perfectly so). Of note, all of the photographed females had actually decided, in advance, to choose ‘betray’ against the male players. Therefore, male participants played with untrustworthy female partners, but were unaware of the deception.

Overwhelmingly, the men who were in the control group showed a strong correlation between rating a woman as highly attractive and being trustworthy; the group on minocycline showed no such correlation.  They recognized attractiveness, ranking some photographs as more attractive than others; but they ranked all of the women as about equal in trustworthiness.

A much more reasonable response, given that they all were strangers!

Watabe et al. suggested that this indicates a role in cognition for the microglia -- cells that heretofore were thought mostly to mediate the brain's immune defense system and blood/brain barrier, and which are inhibited by minocycline.  Me, I'm more intrigued by the larger issue, that who we are, the central core of our personalities, might be far more dependent on minor changes in brain chemistry than most of us are comfortable admitting.

It's also why I have a hard time accepting the idea that the visions experienced by people on dimethyltryptamine (DMT) actually mean anything, in the spiritual sense.  People on DMT report overwhelming hallucinations that were "spiritually transforming," in which they had the sense of being connected with "higher mind" -- i.e., with god.  Terrence McKenna, one of the primary exponents of the use of this drug for inducing spiritual experiences, describes one of his trips this way:


(Y)ou, when you're shown one of these things, a single one of them, you look at it an you know, without a shadow of a doubt, in the moment of looking at this thing, that if it were right here, right now, this world would go mad.  It's like something from another dimension.  It's like an artifact from a flying saucer. It's like something falling out of the mind of God - such objects DO not exist in this universe, and yet, you're looking at it.  [Source]

My problem with all of this is not some kind of moralistic "don't do that stuff to your body," nor is it even a concern for the side effects; it's more that the whole thing strikes me as kind of... silly.  If you throw a monkey wrench into your neurotransmitters, of course you're going to see weird shit.  Acting as if what you're seeing has some sort of external reality seems to me to be a major stretch, landing us right into the weird world of such wingnuts as Carlos Castañeda with his datura root and magic mushrooms as a means of contacting the "ally."

I know, however, that we're also getting perilously close to a topic I touched briefly on a few weeks ago, namely, how we can prove that anything outside our experiences is real.  And I've no desire to skate out onto that philosophical thin ice once again.  But I do think that the scientists in Japan have given yet another blow to our sense of having some kind of permanent external "self" that is independent of our biology.  If all it takes is an antibiotic tablet to change who we trust, it seems that we are, on a fundamental level, what our brain chemistry is at the moment -- and not very much else.
Posted by Gordon Bonnet at 2:45 AM