You would think that, after spending 26 years as an educator, I would have figured out that whenever an educational oversight group says, "We are restructuring and reconfiguring this, for sound pedagogical reasons, in order to improve it," this really means, "We are going to scramble this for no good reason whatsoever, and the result will be something far worse than what you started with."

It happened with the New York State Regents Examinations, which (for those of you who do not live in New York) are the high-school-level course exit exams.  The rallying cry was "Raising the Bar," which makes it a little hard to explain why the biological sciences Regents examination is now so easy that it can be passed by anyone who has three working brain cells.  This exam was passed by a student who, on a quiz on human anatomy, incorrectly labeled the "anus" as being on the left arm.

Oh, but there was one major outcome of the exam restructuring: they changed the name of the course from "Regents Biology" to "Regents Living Environment," which raises the bar by virtue of having more letters.

So, when the College Board decided to restructure the curriculum and examination for AP Biology -- a course I've taught for twenty years -- I should have expected the same to happen.  Here's their rationale, as per the 2011 announcement of the planned changes on the College Board website:


“The revisions were enacted to address a challenging situation in science education at a critical juncture for American competitiveness,” said Gaston Caperton, president of the College Board. “The body of scientific knowledge is constantly expanding. The revisions will help science educators ensure that their instruction is fresh and current and that students develop not just a solid knowledge of the facts but also the ability to practice science and think critically about scientific issues.”

The revised AP Biology course and exam align with the knowledge and skills that many rigorous college-level introductory biology courses now seek to nurture, emphasizing the development of scientific inquiry and reasoning skills. Lab work is a critical component of the course, requiring students to master such skills as posing questions; collecting, analyzing and evaluating data; connecting fundamental concepts; and then defending their conclusions based on experiments.

“The revised course objectives will enable teachers and students to explore key topics in depth and will help students learn to reason with the rigor and objectivity of scientists,” said Trevor Packer, vice president of the Advanced Placement Program at the College Board.

So, I dutifully resubmitted my curriculum, and had it approved by the powers-that-be at the AP Central.  "How different can the exam be?" I thought.  "Biology is what biology is; the concepts are the same.  I already teach a rigorous course, that helps students to draw connections between disparate fields of science, that has an emphasis on application, reasoning, and synthesis, and that uses a strong lab component.  I'm told every year by students returning to visit from college that my class was a good preparation for college-level science.  It will be fine."

Optimism is a losing proposition, sometimes.

My students sat for the exam on Monday.  As you are undoubtedly predicting by now, I was not only wrong, I was so far wrong that it has made me question whether I should even offer this course next year.

The New and Improved AP Biology exam -- of which I only ever get to see the free-response section, the multiple choice section is hardly ever released to teachers for analysis -- was, in my opinion, a vague, confusing muddle that left students wondering, "is that all they're looking for?"  Here are four examples, which I will describe rather than quote in their entirety, for the sake of brevity:


1) A question in which fruit flies are placed in a "choice chamber" and given the choice of flying toward a dry cotton ball or one soaked in glucose solution.  Students are asked to "predict the distribution of the flies after ten minutes, and justify your prediction."  (As a student said to me after the exam, "A central principle of the animal world is that 'some food is better than no food.'")

2)  A question showing a "simplified carbon cycle" that looked, more or less, like this (but without the words in blue):


Students had to correctly label the arrows with "photosynthesis" and "respiration," and state that an example of an organism that does both processes is "a plant."

For reference, the unsimplified carbon cycle I use in my class is shown below: 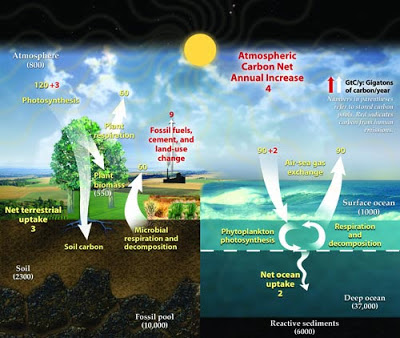 3)  A question regarding the evolution of the earliest amphibians (363 million years ago) from lobe-finned fish (observed in rocks that are 380 million years old), that asked students to predict when, in geological history, you would might find fossils of the transitional species between the two groups.

4)  A question describing an experiment in which rats are given alcohol, and it is found that their urine output increases over rats that are given water.  Students were asked to "pose one scientific question that the researchers were most likely investigating with this experiment" and then "describe the effect of ethyl alcohol on urine production."

Understandably, my students were pretty frustrated by gearing up for an examination that turned out to have been eviscerated of virtually all of its technical content.  And when you have a bunch of students who are pissed off because an exam isn't hard enough, you know there's something wrong.

Here are some direct quotes from some of my students:


"You needed to have barely any actual knowledge of biology in order to take this exam.  A few of the terms from Regents Biology would have been enough to get by on."

"I had worked hard and prepared for this exam.  I'd read the new curriculum and course outline, and I worked hard in class.  I felt like I had this material down.  This test was an insult to all of the hard work I put in."

"The reading passages and experimental design descriptions were too long to justify the extremely simple questions we were asked about them."

"The rat pee question wasn't even at the Regents level, it was below Regents level.  We already knew alcohol is a diuretic -- we discussed it in class when we were learning about the kidney.  If I had proposed to my Regents Biology teacher to do this as a final project, she would have said, 'You can do better than that.'"

"I felt like even though they were shooting for a more conceptual approach, I wasn't being asked to apply concepts at a very high level.  The carbon cycle question, in particular, was not at a college level.  We knew that amount of detail in seventh grade."

Allow me to interject at this point that this group of 29 young people ranks amongst the top three AP biology classes I've ever taught in terms of drive, curiosity, and depth of understanding.  We're not talking about a bunch of slackers, here.  They had good mastery of the material, and are ready to make the jump to college science classes.  The fact that they ended the school year this way is a crashing letdown, and will remain that regardless of what their scores turn out to be.  (And interesting, too, that one of my best and brightest, who aced damn near every quiz and test I gave her this year, when I asked her what score she thought she got, replied, "I could have gotten a one.  I could have gotten a five.  I could have gotten a three.  I really, honestly have no way to tell how successful I was on this exam.")

So, there you have it.  The College Board has fulfilled its educational goal of taking a test that was, on the whole, rigorous but fair, and turning it into a hash.  Again, I shouldn't be surprised; that's been the result of virtually every educational shift I've seen in the last twenty years.  Oh, and one other thing I'm expecting: not only do educational oversight agencies take their Great Leaps Forward by mucking things up royally, they never admit afterwards that they screwed up.  So expect to see press releases soon from the College Board about how wonderful their New and Improved exam was, and how teachers and students everywhere are singing its praises to the skies.  Look, too, for them to begin to "improve" the exams in all of the other AP courses.

I hope I'm retired by then.
Posted by Gordon Bonnet at 2:56 AM