The twisted world of the Tornado Truthers

If I can sum up the rationalist view of the world in one sentence, it would be: your belief in something does not make it the truth.

If you would like me to agree with you, I need more than hearing that you believe it's so.  I need evidence -- or failing that, at least a good, solid, logical argument in favor.

The problem is, there is a slice of humanity for whom a lack of evidence for a claim becomes some kind of twisted argument for its correctness.  These are the people who become conspiracy theorists -- people whose belief in their warped view of reality is so strong that a complete absence of any support for their views is turned inside out, is used to show that the coverup is real.  They are absolutely convinced, and are damn near impossible to argue with.

And now, of course, they have weighed in on the tornadoes that hit Oklahoma in the last three days.

They call themselves the "Tornado Truthers."  Don't believe me?  Here is a collection of direct quotes, taken from Twitter and Facebook.  [Note to readers who are offended by such things; there's a good bit of bad language in these quotes, but to edit that out would diminish the intensity of these people's feelings on this subject.  In any case, be forewarned.]

That tornado pic is insanity, hey government, I know you [sic] watching, TURN THAT FUCKING HAARP MACHINE OFF!!!!

Tornadoes is wild man it's not tornado season... #haarp

Dutchsince on YouTube.com issued a warning for the east coast.  The HAARP induced tornadoes that leveled cities in the midwest is now on its way to the east coast.  East coast get prepared.  Facebook just like Obama refuses to post information to warn America.  Why?

30 + People Dead & Thousands of Homes/Towns DESTROYED cuz of The Illuminati & Their Weather Modification Machine (HAARP) ITS A FACT!  LOOK IT UP AND START SPEAKING OUT TO CREATE SOME WEATHER RELATED DISASTER TO FORCE US OUT OF OUR HOMES INTO THEIR NEW HOMES (FEMA CAMPS)

Thank you h.a.a.r.p. for this crazy fucked up weather

HAARP, of course, stands for High-frequency Active Auroral Research Program, a government-run ionospheric research station in Alaska.  It has nothing to do with weather modification.  It cannot generate tornadoes (or earthquakes, or volcanoes, or hurricanes, or sinkholes, or any of the other hundreds of things it's been claimed to do).

Oh, yeah, and it is tornado season, actually.  The peak of it.  But by all means, "Tornado Truthers," don't let any facts get in the way of your beliefs.

And then Alex Jones, of course, had to weigh in.  Could the recent tornadoes be generated by the US government, a caller asked?  Don't be a ninny, of course they could.  After all, we now know that the insurance companies have been using weather modification to avoid having to pay out to ski resorts during winters when it doesn't snow.  "Of course there's weather weapon stuff going on," Jones said, one eyelid twitching spasmodically.  "We had floods in Texas like fifteen years ago, killed thirty-something people in one night.  Turned out it was the Air Force."  Of this week's tornadoes, he admitted that he wasn't sure that it was the government, but that if you saw small aircraft "in and around the clouds, spraying and doing things, if you saw that, you better bet your bottom dollar they did this, but who knows if they did.  You know, that's the thing, we don't know."

To Jones and his intrepid band of loony followers, anything constitutes evidence.  In fact, nothing constitutes evidence.  "I haven't seen any aircraft spraying stuff and immediately triggering a tornado" simply becomes, "They've got cloaking technology.  Of course you didn't see anything."  And all you have to do is append the word "Truther" to your particular warped view of the universe, and it becomes de facto Truth, capital T, no evidence necessary.

The whole thing makes me want to scream.

Better, though, to focus on what we should be doing; assisting with the cleanup and rebuilding, donating money if you can't go there to help directly.   (Here's a site that has a list of places to donate.)  Beyond that, focusing on the positive stories that have come out of this tragedy -- of the selfless teachers who tried to save their students' lives, some of them who lost their lives in the process; of the first responders who risked their safety to dig survivors out of the rubble of their homes; of the neighbors, friends, and families who pitched in to help as soon as the funnel clouds lifted.  And of the little miracles, like Oklahoma resident Barbara Garcia, who lost her home but was reunited with her little dog who she thought had been killed when her house collapsed.  (Have kleenex handy if you watch the video on this link.  Don't say I didn't warn you.) 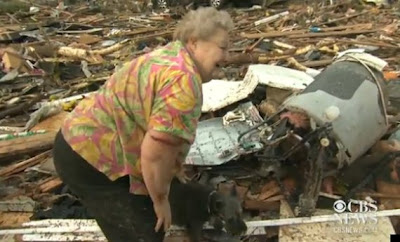 Focus on what's important, here.  With any luck, the deafening silence that greets the screeching pretzel logic of the "Tornado Truthers" will convince them to crawl back under their rocks where they belong -- at least until the next natural disaster occurs.