In the last week, we've dealt with such issues as how to prevent charlatans from defrauding the public, the role of religion in society, and the breakdown of the American educational system.  Today, we turn to a much more important topic, to wit: you can earn $1,000 if you're willing to fly to Brazil and be human bait for an evil water monster.

I'm not making this up, and you can read the story here.  A group called ACAM, which near as I could tell, translates to "Association of Haunting Hunters of Mariana," is trying to capture a creature called the "Caboclo of the Water" that has been "conducting attacks in the region for years."  The last victim was a boy who "had his testicles pulled... while swimming."

Not the most pleasant thing that can happen to a male while having a nice skinnydip.  I can see how local guys might want to get rid of the thing.

If you're willing to do your part to try to capture the Caboclo, though, you'll have to get in line.  They already have one volunteer, one Daniel Pinto, age 37, who is going to give it his best shot.  Apparently the idea is that Pinto is going to spend the night in a half-submerged cage apparatus that has two openings -- one on the side, through which the Caboclo is supposed to enter, and one on top, affording Pinto the opportunity to escape so that he doesn't get eaten.  When Pinto opens the top hatch, the bottom one will automatically slam closed, trapping the Caboclo.

I should probably mention that Pinto will be accompanied in the cage by a goat, because "the creature has a predilection for the species," and that the water will be scented with a "bovine-based blood product."

Sounds like a terrible way to spend an evening, even considering that you get a thousand bucks for doing it.

People will do amazingly foolhardy things for money, though, and it may be that you are still interested in the opportunity.  But before you sign up to go to Brazil for a chance to be the next Caboclo bait (assuming Pinto doesn't succeed, which seems probable), perhaps you should know two more things.  (1) ACAM makes you sign a waiver that they are held harmless if you get eaten, and (2) the Caboclo looks like a "mixture of chicken, lizard, and monkey," which sounds funny until you see an artist's rendition: 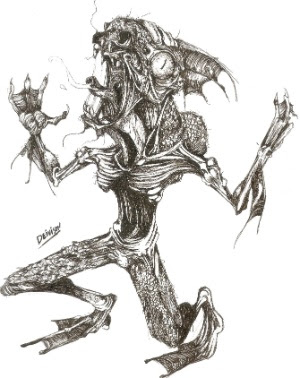 I'd be a poor choice for Caboclo bait, because if I was in a cage and a thing like this came through the door, I wouldn't be able to activate the escape hatch because I would have pissed my pants and then had a stroke.  So I'm thinking I'm not going to apply for the job.

If you'd prefer, now that you've seen what the thing looks like, not to risk your life in a waterlogged cage with a goat to capture it, you may still want to go to Brazil, however.  ACAM states that the region is not only the home to the Caboclo, it is also "infested" by many other entities, including "the Bride of Furquim, the Lambizome Bigfoot, (and) the Knight of Lent."  I wasn't able to find out any details on any of these, but they do sound intriguing, although it must be a pain in the ass to have so many different monsters hanging around the place.

In any case, it's nice to know that other countries have their own versions of America's "squatchers."  Like ours, they seem to take the whole thing pretty seriously.  And I'm always in favor of a scientific approach, even if the great likelihood is that the Caboclo doesn't exist.  Who knows?  Maybe they'll have better luck than Melba Ketchum, who announced last month that she was still trying to prove Bigfoot's existence through DNA analysis despite the fiasco that resulted from her first attempt.  And as I've said more than once, no one would be happier than me if some bizarre, quasi-anthropoid creature was captured for study by science.  It would be cool to have at least one claim by the cryptozoology crew proven correct, given that their batting average thus far is zero.

As long as I don't have to be the bait.  I'll earn my thousand dollars a different way, thank you very much.  Spending the night half-submerged in Brazilian river water and cow blood, with only a goat for company, is not my idea of fun, even if the Caboclo doesn't show up.
Posted by Gordon Bonnet at 2:46 AM