Builders of the lost ark

New from the "I Wish I Were Kidding" department, today we have a story that as much as $37.5 million in taxpayer-funded rebates could go to the building of a theme park in Kentucky called Ark Encounter whose goal is to prove that the story of Noah's Ark is "plausible."

You may have heard about this before.  In fact, regular readers of Skeptophilia might recall that I mentioned it in a post a year ago, but in the context of a project that seemed doomed to fail because of lack of investment.  Well, to misquote Twain, rumors of its demise were great exaggerations.  A story in Reuters yesterday indicates that plans for the theme park are indeed going forward, and the application for the tax incentives -- set to expire if they are not claimed by May 2014 -- will be refiled if good Christians don't step up to the plate with donations. 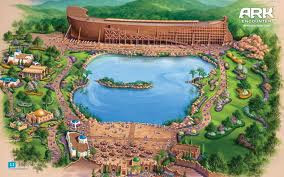 Patrick Marsh, the design director for the park, says that the point of the attraction is to show visitors that Noah could actually have had two of each terrestrial animal on Earth on a 500-foot-long wooden boat for forty days.  (Well, actually, it may not have been two.  Genesis 7:2 says that Noah needed seven of each "clean beast" and two each of the "unclean beasts;" only six verses later, we're told that it was two of everybody.  Since both verses are the unchanging, infallible word of god, we're forced to the conclusion that 2=7, which should definitely be worked into public school math classes next year.)

The current estimate for the number of animal species on Earth, just for reference, is (at a low estimate) five million.  That's ten million animals, if you believe Genesis 7:8 and not Genesis 7:2.  Idealizing the Ark as a rectangular solid, 500x100x100 feet in its length, breadth, and height respectively, that comes to five million cubic feet.  So each animal on the Ark, including the giraffes, gets exactly 0.5 cubic feet in which to stretch its legs.  Oh, yeah, and don't forget that these people believe that the dinosaurs were on there, too.  You'd think that just having one brachiosaurus on board would be enough to kind of cramp things, wouldn't you?

Remind me again about how this is plausible.  I keep losing that point.

Marsh says that there could be some ways of getting around this objection, however.  "If you start with a wolf, you can basically generate all of these dog-like kinds," said Marsh. "As for large animals like dinosaurs, Noah could have brought them on as eggs or juveniles, to save room."

Wait, now, hold on just a moment.  From wolves, we could "generate dog-like kinds?"  I.e., starting with a wolf, and given some ecological selective pressures, we could eventually end up with a hyena, a fox, a chihuahua?  Hmm, Mr. Marsh, I think there's a name for this process.  I've forgotten what it is just now... give me a moment, I'm sure it'll come to me.

Oh, but a giant wooden boat is not all Ark Encounter will have!  Since the whole message of Noah's Ark was that the all-knowing, all-seeing god produced humans who became so unexpectedly wicked that he had to press the "Smite" button and start over, the theme park will also have a mock-up of a pagan temple, with pagan ceremonies done in a "Disneyesque" way, whatever that means.  There will also be a "Ten Plagues" ride.  ("Hey, Dad!  Let's do the 'Ten Plagues ride' again!  I loved when the rollercoaster cars slowed down in front of the 'Killing of the Firstborn Children' display!")

I know you think I'm making this up, but I'm not.  In a direct quote that I am not nearly creative enough to fabricate, Marsh said, "You want everyone to have fun and buy souvenirs and have a good time, but you also want to tell everybody how terrible everything (was)."

What I can understand even less than I get why anyone believes that this obviously mythological nonsense is true, is how the public tax incentives for this project don't violate separation of church and state.  How are the ACLU and various atheist and secular humanist organizations not challenging this in court?  Maybe there are actions going forward which I haven't heard about, but at the moment, most secular legal groups seem to be just watching and waiting.

As for Marsh, and Ark Encounter senior vice president Michael Zovath, they are completely unapologetic about what they're doing.  "If somebody wants to come into Kentucky and build a Harry Potter park and teach all the fun things about witchcraft, nobody would say a word about it - they'd just think it was so cool," Zovath said.  "But if we want to come in ... and build a Biblical theme park, everybody goes crazy."

Yes, Mr. Zovath, that's because everyone knows that Harry Potter is fiction, whereas you seem to be under the mistaken impression that the bible is fact.  My guess is that if someone tried to set up "Hogwarts" in Kentucky, and was making claims that they were actually teaching kids to cast spells and to ride brooms, there would be a bit of a hue and cry.

So, anyway, that's the latest from the Bronze Age mythology = literal truth crowd.  I keep thinking that people have to come to their senses eventually and realize that these folk-tales-become-fact are no more plausible than the idea that earthquakes are caused by Midgard's Serpent having bad dreams, but the biblical literalists just won't go away.  In any case, I'd better wind this up.  I've got to finish up the drawings of my suggestions for the "Cattle Disease" and "Rivers Turning to Blood" features of the "Ten Plagues" ride.
Posted by Gordon Bonnet at 2:40 AM