Here in the United States, we are all too aware that politicians can sometimes act in an erratic fashion.

Just recently, we had the candidate for lieutenant governor of Virginia claim that you shouldn't do yoga, because you'll end up possessed by Satan; a state senator from Louisiana who asked in a public hearing why, if evolution is true, you don't see bacteria turning into humans; and a state representative from Iowa who claimed, in print, that we should follow the biblical rule that allows parents to execute rebellious children (although, in his defense, he did say that he thought that the instances where it was carried out should be "rare").  Just last year, the Republican candidates for Congress seemed to be in a heated competition to see who could make the most bizarre, offensive statement about women, with the odds-on favorite being Richard Mourdock of Indiana, who said that if a woman was raped and got pregnant, that was "something that God intended."  (Mourdock ended up losing to Joe Donnelly, who was able to keep his foot out of his mouth and won the general election to the Senate.)

So, we're no strangers to politicians who make fools of themselves, sometimes in very weird ways.  After all, Dan Quayle's vice presidency was one long derpfest, to the point that comedians and cartoonists went into a protracted period of mourning once he was no longer in office.  But no one here in the US, I think, can beat a British politician who has been in the news recently...

... for claiming that he had sex with an alien and fathered a hybrid child.

The Northern Echo has reported more than once on Simon Parkes of Stakesby, who serves on the Whitby Town Council, and who seems to have a screw loose even if you judge him by American standards.  Beginning with the fact that he claims to have been abducted by aliens, not once, but many times.

"The only thing I can remember after that is it saying to me you will never be hurt, your will never be harmed," Parkes claimed in an interview for an upcoming documentary called Confessions of an Alien Abductee.  "I think I am fairly clear in my head that I am being monitored [by aliens] very closely and if there is anything that’s seriously about to happen or does happen then I am fairly confident in my own mind that they will intervene, they have in the past." 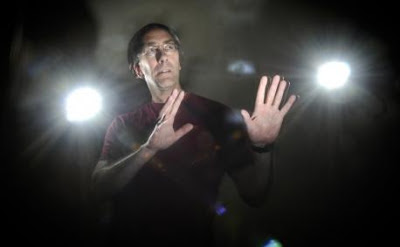 Simon Parkes of Stakesby, communicating with the Mother Ship via interpretive dance

But it gets even more interesting, because Parkes doesn't just get to chat with the aliens, he gets to mate with them.

No, I am not making this up.  Apparently Parkes' interactions with extraterrestrials includes four-times-a-year jaunts up to a waiting Spacecraft of Love, where Parkes gets to engage in some serious bow-chicka-bow-wow with an alien woman named "the Cat Queen."

"My wife found out about it and was very unhappy, clearly," Parkes said.  "That caused a few problems, but it is not on a human level, so I don’t see it as wrong."

I think if I told my wife that I wouldn't be home for dinner because I was heading up to the spaceship to have sex with "the Cat Queen," she would react in a way that was significantly past "very unhappy."  I think she would call the men in the white lab jackets to come pick me up.

"Make sure you bring along your tranquilizer rifle," I can hear her say.  "I think you're gonna need it."

But of course, a general rule from biology is that sex leads to babies, and Parkes' liaison with "the Cat Queen" was no exception.  They have a hybrid child, Parkes said, whose name is "Zarka."

Oh, yeah, and Parkes' actual mother is a nine-foot-tall alien with green skin and eight fingers per hand. 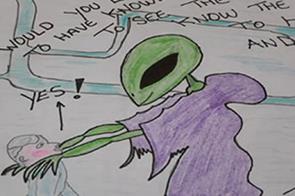 Parkes as a child, interacting with Mom

What is astonishing about all of this is that nobody much seems to mind.  "Ha ha," they all seem to say, over there in Whitby.  "That Simon Parkes, he certainly is a character."  He apparently has been babbling about aliens for years, long before his election to the Town Council in 2012, and everyone pretty much shrugs it off.

So, anyhow, that's the news from the UK.  I must say, for the record, that I rather prefer their variety of wacko to ours.  Parkes seems harmless enough, and one article about him states that he is the "most active member of the Town Council," which is (after all) what he was elected for.  All in all, if you  have to choose between politicians who are crazy, dumb, or bigoted, go with crazy every time.

At least the crazy ones are kind of fun to watch, which is more than I can say for the dumb and bigoted types we seem to be dealing with over here on the other side of the Atlantic.
Posted by Gordon Bonnet at 2:58 AM