My prognostication earlier this year that Melba Ketchum's failure to demonstrate that she had a sample of Bigfoot DNA would be an end to squatchery was apparently wildly wrong.

Ketchum's embarrassment of a scholarly paper, and her subsequent meltdown, evidently discouraged no one in the cryptozoological world, although it did generate a number of highly witty comments (my two favorites were "I guess she didn't Ketchum" and "Melba is toast").  But judging by four stories this week, the folks who believe that our hairy cousins populate the remote areas of the world are still undaunted.

First, we have a report from Malaysia that a set of 200 footprints belonging to a Southeast Asian Sasquatch were reported from the village of Kampung Kepis Baru.

Now, my first thought was: I was just in Malaysia last August, and the Bigfoot waits until now to show up?  There I was, chasing birds, and I could have been chasing proto-hominins.  Best of all, it would have been chasing proto-hominins in the tropics, which is definitely preferable to freezing my ass off in the Himalayas.  But sometimes you don't get this kind of break, however richly you deserve it.

Be that as it may, the guy who discovered the footprints, a rubber plantation owner named Adnis Pungut, took the following photograph: 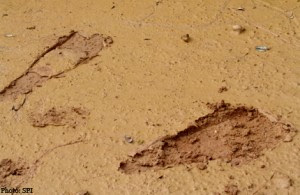 So, my next thought was: really?  That's your evidence?  Couple that with the following quote from the article:


The footprints were all the same size and according to reports from Pungut based on the prints it could be assumed the creature who made them had two legs and weighed more then [sic] 100kg or about 220lbs.

220 pounds?  Wow, that is one impressive creature.  I can't think of anything that could be an upright, bipedal creature that weighs 220 pounds except for a Malaysian Bigfoot.  Unless, possibly, it could be an overweight American tourist wearing flip-flops.


Next, we have a real estate company called Estately, Inc., which has compiled a list of the best and worst states for Sasquatch to live.  Unsurprising that Washington comes first, especially given that Olympia Beer Company is offering a million-dollar reward for anyone who captures a Bigfoot alive.  This is followed by Oregon and California, but the fourth state is kind of mystifying.

Apparently, according to the article, Bigfoot has been sighted in Ohio 234 times, making it rank fourth.  Who knew?

If you're interested, Florida came in dead last, probably because of the general "if it moves, shoot it" attitude of a significant percentage of Floridians.

But I do have a question about all of this.  What earthly purpose can a real estate company have for compiling such a list?  Is it trying to attract cryptozoologists?  It seems like kind of a small target audience.  Selling real estate to Sasquatch himself also seems to me to be a losing proposition.  So however you cut it, it's kind of bizarre.


But not nearly as bizarre as our third story, which comes out of Ogden, Utah, where a retired private detective named Todd May claims to have found a fossilized Bigfoot skull.  May apparently has had Bigfoot sightings while hiking many times, according to the article:


May says he found the item about six weeks ago near the mouth of Ogden Canyon while he was on a dig looking for fossils. He said he was sort of drawn to something he could see sticking out of the ground and it seemed like just a rock but he went ahead and began to dig it out. He said at first he couldn’t tell exactly what it was because it was face down but once he got it completely dug out he could see the face perfectly. May believes this 70 lb object that he has recovered is a fossilized Bigfoot skull and says he has also had Bigfoot sightings in the same area on multiple occasions.

So, without further ado, here's a picture of May with his prize: 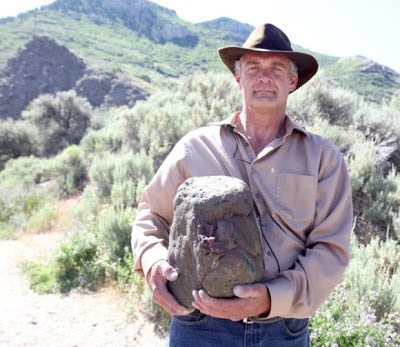 Um, Mr. May?  I hate to break it to you, but that is not a Bigfoot skull.  That is a rock.  I have to admit that it looks like a very sad rock, but it is a rock nonetheless.  You can now join Melba Ketchum in the "Sorry, I Don't Think So" department.


Our last story, though, is an encouraging one.  Just because the evidence for Bigfoot is pretty much nonexistent doesn't mean that he can't have his very own musical.

Yes, folks, Sasquatched: The Musical opens on July 9 at the New York Musical Theater Festival.  Billed as a heartwarming story about "about a Sasquatch named Arthur who gets lost in Columbia National Park and befriends a young boy named Sam," the play tells the tale of how they "encounter oddball locals, dodge a TV crew on the hunt for Bigfoot, and bust out into songs to help move the story along."

The songs include "Shake the Camera and Run" and "Eight Feet Tall and He Smelled Like a Skunk." And, for the record, I didn't make either of these titles up.   Arthur the Sasquatch does have some solos, but according to playwright Phil Darg, they are "dignified" and "not really show tunes."

I know I'm relieved about that.  This sounds like it's all about dignity. 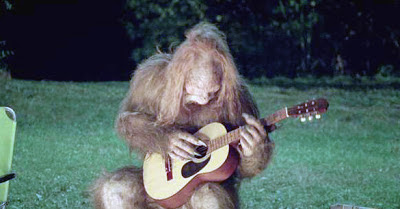 So, anyway, that's the news from the world of cryptozoology.  And I thought squatching was a dying pastime.  Little I knew.  Apparently there are plenty of Sasquatch enthusiasts out there, still misinterpreting evidence, hyping Bigfoot for publicity, and writing musicals.  And I guess if it keeps you entertained, there's nothing wrong with it, as long as you don't have a Melba-style freakout if people laugh at you.
Posted by Gordon Bonnet at 4:41 AM