Getting to the point

There is one alternative medicine modality that I've always been hesitant to criticize.  That hesitancy has come from the fact that it is widespread, so widespread that I know a dozen people who have used it and reported positive results.  Even though I could see no biologically sound reason why it would work the way its practitioners claimed, it's always seemed to me to fall into that gray area of "things that may work for some as-yet unknown reason."

That modality is acupuncture.  I get asked about it regularly, both in my Biology classes and in my Critical Thinking classes, and I've usually shrugged, and said, "Well, I don't believe in prana and chakras and the rest of it, but could acupuncture be triggering some positive response, in some way we have yet to elucidate?  Sure.  People used medicinal plants long before they understood pharmacology, and the fact that they attributed the plants' success at treating disease to good magic or benevolent spirits doesn't mean that the plants didn't work.  It could be the same here."

Well, I can't make that claim any more.

Just last week, David Colquhoun (University College of London) and Steven Novella (Yale School of Medicine) published a paper in Anesthesia & Analgesia (available here) that evaluates the results of every controlled study of acupuncture in the past ten years, and reaches the following conclusion:


The outcome of this research, we propose, is that the benefits of acupuncture, if any, are too small and too transient to be of any clinical significance.  It seems that acupuncture is little or no more than a theatrical placebo...

The interests of medicine would be best-served if we emulated the Chinese Emperor Dao Guang and issued an edict stating that acupuncture and moxibustion should no longer be used in clinical practice.

I have to admit that when I read this paper, my first reaction was to wince.  Part of me, I suppose, really wanted acupuncture to work -- even if we had no idea how it worked, the idea that you could alleviate pain (or anxiety, or insomnia, or depression) simply by sticking someone with little needles seemed preferable to telling people that they simply had to live with chronic conditions if standard medical treatment failed.  But one of the harsher sides of the rationalist view is that you go wherever the evidence drives you, even if you don't want to.  And after reading the paper by Colquhoun and Novella, and taking a look at their sources, I am brought to the inescapable conclusion that they are correct.

It's frequently that way, though, isn't it?  I think most of us, even the most hard-nosed skeptics in the world, would be delighted if some of the wild things the woo-woos claim turned out to be true.  Being a biologist, I would be thrilled if there were surviving proto-hominids like Sasquatch or surviving dinosaurs like Nessie, Champ, Mokele-Mbembe, Kelpies, and the Bunyip.  A convincing demonstration of intelligent alien life would be about the coolest thing I can imagine.  Even the existence of an afterlife is something I'd be mighty happy about (as long as it wasn't the being-tortured-by-Satan-for-all-eternity variety).

But, as my grandma used to say, "Wishin' don't make it so."  And it appears that in the case of acupuncture, the Colquhoun/Novella study conclusively demonstrates that there's nothing much there besides the placebo effect -- sorry though I am to have to say so.

Of course, that doesn't mean that acupuncturists are going to go out of business any time soon.  There are still a lot of true believers out there, and they can pull in clients from odd sources, sometimes.  Just last week, the veterinarians at a Tel Aviv zoo decided to call in acupuncturists because their attempts to treat a chronic ear infection in one of the zoo animals had failed.  The patient? 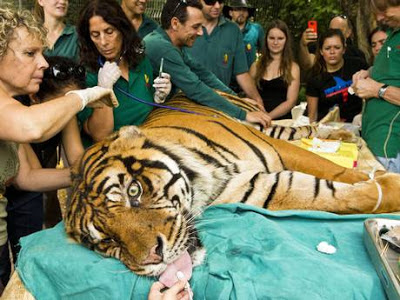 Now that's some conviction in your beliefs.  You think acupuncture works?  Here, go stick some needles in this live tiger.

Be that as it may, apparently they anesthetized the tiger beforehand (smart move), and the acupuncturists all survived unscathed.  No word yet on whether Kitty's ears have stopped hurting.  My guess, given the Colquhoun/Novella study, is no, since the placebo effect doesn't work too well on cats.

Although to be fair, judging by my success rate at giving pills to my own cats, traditional veterinary medicine generates its own, unique set of problems as well.
Posted by Gordon Bonnet at 2:53 AM