News from the squatching world

I have two pieces of good news and one piece of bad news for any readers who are Bigfoot hunters.

Now, mind you, it's a job I wouldn't mind having myself, notwithstanding that to steal a line from Monty Python's Camel Spotters, we so far have acceptable hard evidence of nearly one Bigfoot.  But to a guy who almost didn't go to college because he wanted to go into the National Park Service training program, living your life outdoors with a backpack on doesn't seem like such a bad way to go.

So let's start with one piece of good news, which is that we have a new set of audio recordings to listen to.

Craig Woolheater, of Cryptomundo, posted yesterday a report and some audio clips from "Sasquatch Ontario."  The clips are well worth listening to, although they are a little creepy, what with the sound of rain falling in the background, and no video to go with it other than what your imagination comes up with.  "This is what you get with 8 months of habituation with a sasquatch," the text from Sasquatch Ontario reads.  "This is the result of dedication, perseverance and consistency.  As the PGF [the "Patterson-Gimlin film," one of the most famous video clips of a Bigfoot] has stood the test of time, so will this audio.  If there are any audio analysts who work with law enforcement whose word is relied upon for convictions, please contact us through our channel if interested in pursuing the truth of this matter.  Your cooperation is greatly appreciated."

Now, despite the fact that this audio is of a scariness level such that, if I were out in a tent alone in the wilderness and heard these noises, I would piss myself and then have an aneurysm, I must say that I'm not completely convinced that we're hearing Bigfoot.  To my ears, this could be Bigfoot, or it could equally easily be a guy out there saying "YARP" and "GRRROP" and sometimes "WOOOOO."  So as convincing evidence goes, I'm not sold, although (as always) I am happy to defer to anyone who can prove otherwise.

Now for the bad news.  One of the standard claims in the analysis of alleged Bigfootprints is that they show an apelike "midtarsal break" -- that the flexibility in the ligaments in ape feet cause the depression of the middle part of the foot, so that footprints show a ridge left behind where the foot flexed.  This, Sasquatch researchers claim, shows that the prints could not have been made by a human. 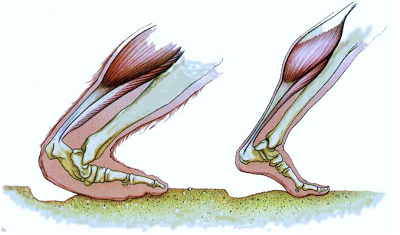 Unfortunately for this conjecture, some anthropologists checked out the feet of 398 visitors to the Boston Museum of Science, and found that 13% of them had the midtarsal break -- i.e., flexible, apelike feet.  This neatly punches a hole in the Sasquatch footprints theory and the creationist claim that we're not apes simultaneously, although it must be said that I'm a helluva lot happier about the second one than I am about the first.

So it's a bit of a rough go for the serious squatchers, such as Dr. Jeffrey Meldrum, who made a lot out of this piece of evidence.  As Sharon Hill, over at the excellent site Doubtful News, put it, "[T]his puts Dr. Jeffrey Meldrum, Idaho State University professor and Bigfoot expert, in an interesting position.  He has stated, and published that Sasquatch/Bigfoot prints frequently show a mid-tarsal break and this is indicative of the prints NOT being human...  Meldrum has to revise his ideas now. This is how science works. What does this mean for Bigfoot evidence? Well, it weakens it just a bit more. After all these years, in normal science progress, the support for a theory should be getting better. We do not see that in Bigfoot research. The cards just continue to fall."

So that kind of sucks, for the squatching world.   But to end on a high note, figuratively if not literally, just last Friday we had news of a new squatching tool that all of you should purchase as soon as it's available.  Called SquatchIt, it is a "Sasquatch sound simulator" about which the press release boasts as follows:


SquatchIt has been scientifically designed to be the most accurate, powerful and loud Sasquatch call for use by Bigfoot finders, to scare friends on a camping trip, to heckle politicians and raise a ruckus in general.  It is loud and scary sounding and is sure to soil many pair of underwear on camping trips...  There are so many uses for SquatchIt from using it to round up the kids for dinner to scaring your friends to attracting the ultimate big game, Sasquatch himself!...  The SquatchIt call is a beautifully crafted piece made out of wood and plastic. The nose of the call is a plastic ribbed accordion like piece we refer to as a “gender bender” that allows the user to change the call pitch between higher tone feminine and low tone masculine mode allowing users to make the screaming sounds that many believe a Sasquatch would make if Bigfoot were proven to exist.

Well, I think this is just splendid, and I certainly will certainly buy one as soon as they're available.  After all, the alternative is to stand in the rain saying "YARP," and that doesn't sound like nearly as much fun.
Posted by Gordon Bonnet at 2:44 AM