Sanal Edamaruku and the death curse

A good many of the topics I discuss on Skeptophilia are serious, and more than a few are (or should be) rage-inducing. There are times when the idiocy people are driven to by superstition and credulity rightly makes rationalists furious.

Other times, though, the whole thing devolves into street theater.  Witness what happened to Sanal Edamaruku back in 2008.

You might know Edamaruku's name.  He's a skeptic and outspoken atheist in India, where he is the president of the Indian Rationalist Association and the founder and president of Rationalist International.  Edamaruku has, in the past few years, become something of a lightning rod in India for the fight against superstition, and in fact he was brought up on blasphemy charges last year after exposing a "weeping Jesus" statue in a Catholic church in Mumbai as a hoax.  (He left the country shortly thereafter, and is currently touring Europe and speaking out against the role of religion in government -- so the outcome of the charges is, as yet, pending.) 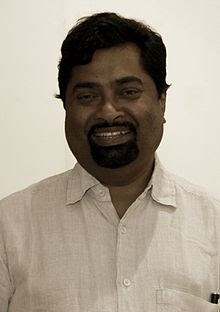 So a lot of what Edamaruku involves himself in is deadly serious -- his courage at fighting indoctrination and discrimination in one of the most thoroughly religious countries in the world is an inspiration.  But just yesterday, I ran into a video of something that he did that ranks right up there with some of the best comedy I've seen -- and that's even considering that the whole thing was in Hindi and I didn't understand a single word of it.

Apparently it all started five years ago when the minister of the state of Madhya Pradesh, Uma Bharati, accused a political rival of using the powers of a "tantrik" (a black magician) to harm her.  The magic of the tantrik had, Bharati said, caused her uncle to die, made her hit her head on the door of her car, and made mysterious blisters arise on her leg.

Well, Edamaruku was interviewed and asked about the claim, and he said that it was ridiculous.  No one, he said, could harm someone using magic.  And then, Edamaruku challenged the tantrik -- one Pandit Surinder Sharma -- to try and kill him on public television.

You should watch the video of the result.  Trust me.  It's brilliant.

It's hard to pick out my favorite aspect of this film.  The serious expression on Sharma's face, as contrasted to Edamaruku, who looks like he's trying not to burst out laughing.  The point where Sharma takes off his shirt, as if to say, "Okay, this magic will work much better if you can see my flabby chest."  The chanting, the waving around of a knife, the flicking of water droplets at Edamaruku, who stands there, an amused expression on his face, through it all.  Best of all, the point where Sharma asks for more time.

"Hang on," Sharma seems to be saying, "I'm not done yet.  Hold still while I kill you some more."

The ordeal lasted two hours (the video I linked is a six-minute excerpt), at which time the anchor declared it a failure, as Edamaruku had endured it all without a scratch (much less a mysterious blister).  According to one source, Sharma was baffled by his inability to magically hurt Edamaruku, and said, "You must worship a strong god who was protecting you the whole time."

But it takes a lot to discourage a magician, and Sharma said that he wanted to try again, this time using "ultimate magic."  Here's an eyewitness description of what followed:

The encounter took place under the open night sky. The tantrik and his two assistants were kindling a fire and staring into the flames. Sanal was in good humour. Once the ultimate magic was invoked, there wouldn’t be any way back, the tantrik warned. Within two minutes, Sanal would get crazy, and one minute later he would scream in pain and die. Didn’t he want to save his life before it was too late? Sanal laughed, and the countdown begun. The tantriks chanted their “Om lingalingalingalinga, kilikilikili….” followed by ever changing cascades of strange words and sounds. The speed increased hysterically. They threw all kinds of magic ingredients into the flames that produced changing colours, crackling and fizzling sounds and white smoke. While chanting, the tantrik came close to Sanal, moved his hands in front of him and touched him, but was called back by the anchor. After the earlier covert attempts of the tantrik to use force against Sanal, he was warned to keep distance and avoid touching Sanal. But the tantrik “forgot” this rule again and again.

Now the tantrik wrote Sanal’s name on a sheet of paper, tore it into small pieces, dipped them into a pot with boiling butter oil and threw them dramatically into the flames. Nothing happened. Singing and singing, he sprinkled water on Sanal, mopped a bunch of peacock feathers over his head, threw mustard seed into the fire and other outlandish things more. Sanal smiled, nothing happened, and time was running out. Only seven more minutes before midnight, the tantrik decided to use his ultimate weapon: the clod of wheat flour dough. He kneaded it and powdered it with mysterious ingredients, then asked Sanal to touch it. Sanal did so, and the grand magic finale begun. The tantrik pierced blunt nails on the dough, then cut it wildly with a knife and threw them into the fire. That moment, Sanal should have broken down. But he did not. He laughed. Forty more seconds, counted the anchor, twenty, ten, five… it’s over!

Myself, I think Edamaruku missed a sterling opportunity.  I think when Sharma threw the "clod of wheat flour dough" into the fire, Edamaruku should have clutched his chest and fallen to the ground.  Then, when Sharma declared himself victorious, Edamaruku would have stood up and said, "Oh, sorry.  Just kidding."

I know that's what I would have done.  But I'm just mean that way.

I find it heartening that we have people like Edamaruku in the world, who are not afraid to expose the sort of credulous nonsense of charlatans like Sharma for what it is.  And the fact that he can do so with confidence and unfailing good humor (and on public television, no less) is an inspiration.  You have to wonder how many Indians were led to question the veracity of their beliefs by watching this spectacle.

In some religious philosophy, one is encouraged to laugh at the devil -- ridicule, it is said, is the one thing that Satan cannot stand.  I, however, would turn that around.  Laughter is one of the soundest weapons of rationality.  If we illuminate superstition with the clear light of science, it can't help seeming funny -- and our ability to laugh at it is the first step toward letting it all go.
Posted by Gordon Bonnet at 3:01 AM