As I've mentioned before, I tend to avoid purely political topics, both in Skeptophilia and also in face-to-face discussion.  I simply don't know enough about most politically-based issues to comment intelligently, and if there's one thing the world needs less of, it's people bloviating on topics about which they are essentially ignorant.

Still, there are a couple of things that strike me as interesting about political races in general.  The first is that a lot of elected officials are evidently elected on the basis of being Average People -- the folksy, I'm-one-of-you-guys approach is wildly successful, creating an environment where "Vote for Joe Smith!  He's just as dumb as you are!" becomes a viable campaign slogan.

The second is how many people are one-issue voters.  As long as the candidate agrees with you on that issue (common ones are abortion, gay marriage, tax reduction, and immigration policy) (s)he can have wildly bizarre opinions on other topics and still get elected.  In fact, as long as the candidate has the right line with respect to the one issue, (s)he can be crazy as a bedbug and no one seems to notice.

Which brings us to E. W. Jackson, who is a candidate for lieutenant governor of Virginia. 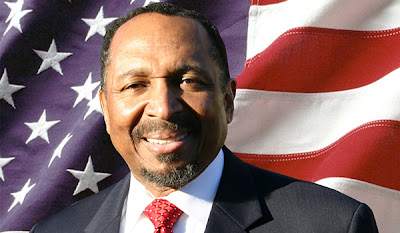 Jackson is a minister-turned-politician who is the pastor of Exodus Faith Ministries, an evangelical Christian sect.  He's also a published author, with a book called Ten Commandments to an Extraordinary Life: Making Your Dreams Come True that was excerpted in an article for the National Review Online by Betsy Woodruff called "From the Pulpit to the Ticket."  And these excerpts, along with direct quotes from a political rally/prayer meetin' that Woodruff attended, make Reverend Jackson sound like he might be, not to put too fine a point on it, batshit crazy.

He clearly thinks that his political success is one of god's most pressing priorities.  At the rally, he got a little agitated when he considered the possibility of losing the election:


One of the questions they’re asking now is, are they going to be able to shut E. W. Jackson?  And the answer is no, because there’s a fire in my bones!  Our hope is built on nothing less than Jesus’ love and righteousness!  You try to build this nation on anything or any other foundation, and it will fall!  Glory to God!

Predictably, his stance is "pro-life" and against gay marriage -- hardly unusual for a conservative Republican.  What sets him apart is his attitude toward his intended constituency.  Here's a quote from his book:


[M]ost people are dead spirits. As such they have the nature of Satan who does not want to have anything to do with God or anyone related to Him. Of course they are not aware that they are imbued with the nature of Satan. They would be mortified by the idea of becoming Satanists or devil worshippers. Satan benefits far more from people who do not know they serve him than from those who knowingly bow to him. Your spirit was made for attachment. It is either attached to God or to Satan, but it is not neutral, no matter how much people think themselves to be.

And, in Jackson's mind, it's easy to get "attached to Satan."  Even doing yoga is enough:


When one hears the word meditation, it conjures an image of Maharishi Yoga talking about finding a mantra and striving for nirvana. . . . The purpose of such meditation is to empty oneself. . . . [Satan] is happy to invade the empty vacuum of your soul and possess it. That is why people serve Satan without ever knowing it or deciding to, but no one can be a child of God without making a decision to surrender to him. Beware of systems of spirituality which tell you to empty yourself. You will end up filled with something you probably do not want.

Yes, people, Jackson believes that Satan latches onto people while they're doing yoga.  Here I just thought that yoga was good for making you less stressed and more flexible, but apparently I was wrong -- Satan just waits till you go into the Lotus Position and then leaps on you while your legs are all tangled up.

What's worse, apparently the people at his church just kind of sit there and nod when he says this stuff, a reaction I find frankly baffling.  I mean, if I told my students that they shouldn't eat pineapple,  because pineapple is the Devil's Fruit (you can tell because it's spiky), and that they'll become possessed by Satan if they eat it, I would quite rightly be escorted off the premises after being given a horse tranquilizer.  But Jackson, evidently, can babble this kind of nonsense, and no one objects.

You have to wonder how the interests of Virginia will be best served by having a lieutenant governor who thinks that most of the people in his state are dead souls who have the nature of Satan, and who seems, frankly, to be a raving loon.

If I owned a yoga studio in Virginia, I'd be thinking of other options right now.  Maybe switching over to PraiseMoves, which bills itself as "the Christian alternative to yoga."  The founders of PraiseMoves would agree wholeheartedly with Reverend Jackson:


Yoga is always destined to fail miserably in its fundamental purpose. Yoga practices can be very harmful as well. Physically, spiritually and emotionally harmful. Yoga was always meant to be imparted by a teacher that stayed with the student for long periods of time. Constantly monitoring, constantly instructing, constantly observing the student. The Indian gurus that teach yoga are always in a disciple/devotee relationship with their students. This is because yoga can be a very dangerous practice...  The exact opposite happens in a typical PraiseMoves class. At the end of class, the participants feel connected with fellow Believers. They have had a real encounter with the God of the Bible, through His Word, and His Holy Spirit.

So that clears that up.

Anyhow, despite my being generally apolitical, I can't help but hope that Reverend Jackson loses this fall.  I haven't yet gotten over my elation that Michele Bachmann isn't seeking reelection -- I was hoping that there'd be one less wacko in an elected position this November.  But if Reverend Jackson wins, it'll come out a wash, which seems to be a pretty common occurrence.  Maybe there's a Law of Conservation of Elected Wingnuts, or something.