I probably come across as hostile to religion, sometimes, and at the risk of being accused of he-doth-protest-too-much, it really isn't true.  In matters of belief, I am a strong advocate for following wherever your heart and mind leads, and far be it from me to try to push anyone in a direction they don't want to go -- provided they accord me the same right.

Still, I'm an atheist for a reason, and I must state for the record that mostly what I feel toward a lot of religious ideologies is incomprehension.  When I read about various gods and angels and demons and spirits and so on, mostly what my reaction is can be summed up as, "Why on earth do you think that's true?"  But again, if it floats your boat, and you don't feel the need to have congress pass laws mandating that everyone treat it as scientific fact, you certainly are free to believe what you like.  (I might, however, write a sardonic post about it, every so often.  Tolerance and ecumenism only gets you so far.)

In fact, I find it unendingly interesting what sorts of beliefs people gravitate towards.  With the exception of people whose beliefs are what they are simply because they were raised that way and have never considered anything else, I have noticed a general pattern; nice people tend to envision nice deities, and mean, narrow-minded people envision harsh, judgmental ones.  We tend to populate the spiritual world with beings that match our temperaments, all the way from Borne Up On the Wings of Angels to Sinners in the Hands of an Angry God.

All of which is a rather verbose way to introduce today's news story, which comes all the way from Myanmar.

Meet the Buddhist monk Ashin Wirathu.  You probably already have a picture in your mind, just from my identification of him as a "Buddhist monk" -- and likely that picture involves someone whose foremost characteristics are a love of peace, love, understanding, and detachment from the world.  Given that most of us have people like the Dalai Lama and Thich Nhat Hanh as our models, it's no wonder that we have this as our mental image of what the term means.

This image, however, is very far from the truth.  Wirathu is currently traveling around Myanmar, trying to stir up violent ethnic cleansing against the country's Muslim minority.  [Source] 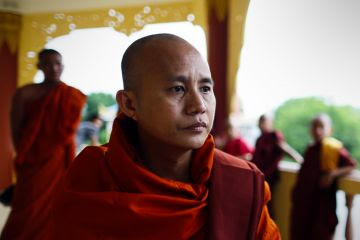 "Muslims are like the African carp," Wirathu said, in an interview with reporters from Global Post.  "They breed quickly and they are very violent and they eat their own kind.  Even though they are minorities here, we are suffering under the burden they bring us...  Because the Burmese people and the Buddhists are devoured every day, the national religion needs to be protected."

His rhetoric may sound familiar, especially if you have read any of the speeches of Adolf Hitler.

He refers to Muslims as "mad dogs" and "cannibals," and advocates driving out of the country those Muslims who will not convert to Buddhism.  He has been a strong advocate of a "National Identity Law," which would mandate Buddhism as the official state religion for all citizens of Myanmar.  He has started a campaign called "969" (after the number of virtues of the Buddha) that encourages Buddhists only to do business with other Buddhists.

Now, let me say first that I am no apologist for Islam.  Muslims in the Middle East, Africa, and (increasingly) in Europe and North America have a lot to answer for, given the silence of their leaders in the face of terrorism, intolerance, and subjugation of women, minorities, and those who dissent.  But in Myanmar, Muslims only make up 4% of the population [Source] -- so this has much more of a flavor of oppressing a vilified minority than it does striking out against a group that has created legitimate problems.

Be that as it may, Wirathu's fire-and-brimstone speeches have stirred up the populace in a way that is all too familiar to students of history.  Recent riots have, according to estimates in Global Post, caused the deaths of 200 Muslim citizens of Myanmar, and displaced from their homes 150,000 others.

The irony of what amounts to a jihad against Muslims leaves me shaking my head in dismay.

It is appalling that Wirathu has corrupted the message of Buddhism in this way -- Buddhism has, for the most part, been the most tolerant and peace-loving of the world's major religions.  But it is, perhaps, unsurprising.  The fact that kind people spin religion in a kind fashion, and violent ones in a violent fashion, is universal -- and further evidence (in my opinion) that all of religion is a human invention.  We live in the world we create, and Wirathu and his followers are determined to create a world out of hatred, intolerance, violence, and demonization of people who are different.