The iniquity of the ancestors

This week was rife with religious stories.  First, we had the Catholics arguing over whether or not Pope Francis did a public exorcism of a demon in St. Peter's Square; then we had the announcement that plans for a Noah's Ark theme park in Kentucky were going forward; and just yesterday, there was an allegation by the candidate for lieutenant governor in Virginia that doing yoga will make you vulnerable to Satan.  So it seems only fitting to end the week with yet another bizarre claim from a public religious figure -- this time that Native Americans need to pray for god's forgiveness of their "generational iniquity" because their ancestors were pagans.

The perpetrator of this amazingly offensive statement was televangelist Cindy Jacobs, who is somewhat notorious for saying bizarre stuff.  She has, in the past year, claimed that she was given "magic spaghetti" by god that multiplies in volume; that god protects her shoes; that she is capable of curing mental illness by "binding the spirit of insanity;" and, weirdest of all, that mass bird and fish deaths were caused by the repeal of "Don't Ask, Don't Tell."  [You can watch clips of all of these here.]  So we really shouldn't expect that anything she says is going to be the epitome of rationality. 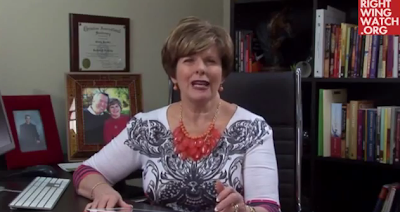 But this time, she seems to have crossed some sort of threshold into outright racism.  Here's a transcript of the quote in question.  It occurred during a talk on the evil spirit "Leviathan," which she claims is especially designed to attack people with pagan ancestry:


If you have in your bloodline any animus [sic], any Native American blood, for instance — not all Native Americans worshiped the serpent or crocodile, many did — but you might want to renounce that and repent for the generational iniquity.  If you are — perhaps you’re Mexican and you might have indigenous blood in you or Mayan blood, those who have Aztec blood in any way, you need to repent for the sin of animism before you begin to deal with this spirit.

Now, it's to be hoped that you reacted to this statement the same way I did -- with outrage, that (1) there could be any "sin" associated with your race, or that (2) there is such a thing as "hereditary guilt," condemning you because of something wrong your ancestors did.  I am hopeful that even Christians would be horrified at what this woman has said, and repudiate her soundly.

But there's a problem with that, and it's a little awkward to point it out, but it must be said.  The difficulty is that what Jacobs is saying is completely consistent with Christian belief, as laid out in the bible.

Examples of descendants being held responsible for their ancestors' transgressions abound in the bible.  How about the cheery line from Psalm 109, regarding what should happen to a wicked man:  "Let his days be few; let another take over his position. Let his children be fatherless and his wife a widow. Let his children wander as beggars, searching for food far from their demolished homes."

Then, in Isaiah 14:19-21 we read, "But you are cast out of your grave like an abominable branch, and as the raiment of those that are slain, thrust through with a sword, that go down to the stones of the pit; as a carcass trodden under feet.  You shall not be joined with them in burial, because you have destroyed your land, and slain your people: the seed of evildoers shall never be renowned.  Prepare slaughter for his children for the iniquity of their fathers; that they do not rise, nor possess the land, nor fill the face of the world with cities."

Oh, and there's Deuteronomy 23:2:  "No one born of a forbidden marriage nor any of their descendants may enter the assembly of the Lord, not even in the tenth generation."

And, after all, what is the whole Adam and Eve story about but all of humanity being punished because two of our distant ancestors broke some weird and arbitrary rule about which fruit to eat?

In any case, repellent though I find Cindy Jacobs' statements, the fact remains that they really are pretty consistent with what the bible says.  So, honestly, it's not Jacobs that needs to explain why she said what she did; the reason for that is obvious.  The ones who have some explaining to do are the devout, bible-believing Christians who say she's wrong.

In any case, the whole thing makes me want to scream, so I think I may turn back to dealing with less high-blood-pressure-inducing topics, such as how anyone can really believe that there is a guinea pig loose on Mars.  But I will leave you with one last thought about today's story, a quote from the wonderful author Terry Pratchett: