I must admit to having a fascination with aliens.

I recall being the tender age of five years old and sitting spellbound watching the impossibly ridiculous aliens on the television show Lost in Space -- and being only a couple of years older and being positively captivated by the marginally-less-ridiculous aliens on the original Star Trek.  Even now I still have a soft spot in my heart for bug-eyed little gray guys, and I have the posters on my classroom wall to prove it (including a replica of Fox Mulder's famous UFO poster with the caption "I Want To Believe").  I also once paid a visit to the International UFO Museum of Roswell, New Mexico, with interesting results: 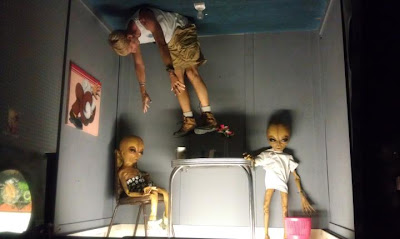 So I suppose it's to be expected that I was pretty excited about a new project called "Lone Signal" that aims to transmit messages to nearby star systems with habitable planets.

Lone Signal says, on its home page, "At Lone Signal, we believe that crowdsourcing messaging to extraterrestrial intelligence (METI) is the ideal approach to establishing a stable, cohesive, and well-resourced interstellar beacon on Earth.  We invite you to join us in the first collective and continuous METI experiment in human history. Lone Signal allows anyone with Internet access to compose and transmit messages to strategically selected stellar systems."

You can send one Twitter-style 140-character message for free, and four additional ones for 99 cents.  The idea is then to use satellite equipment in Carmel Valley, California that Lone Signal's CEO, Jamie King, purchased, to send these messages to the star Gliese 526, which is 17 light years away and has a planet in the so-called "Goldilocks Zone" where the temperature is right to have water in its liquid form.

King is currently trying to raise enough money to buy additional satellite equipment -- and we're not just talking about a couple of dishes, here.  He wants to generate enough interest in his project to raise $100 million -- sufficient to turn the Earth into a "transmitting beacon," sending continuous signals to nearby stars that seem like good candidates for hosting intelligent life.  Creating an interstellar lighthouse, is what it amounts to.

I'm not entirely sure what I think about this.

First, on the positive side, there's the coolness factor.  The idea that we might be capable of sending a coordinated message to intelligent life elsewhere in the galaxy is nothing short of thrilling.  Ever since watching Captain Kirk interact with Balok and the Andorians and the Salt Vampire, I've lived in hope of one day finding out that we really aren't alone in the universe.  To me, finding unequivocal evidence of life on another planet would be just about the most exciting thing I can imagine, even if they don't turn out to have blue skin and antennae. 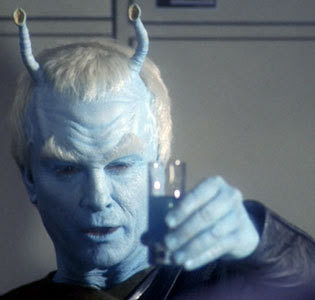 The problem, though, is that this message is going to be composed by... random humans.  And I hate to point it out, and I say this with all due affection (being a random human myself), but when you put something like this in the hands of average people, the results can be kind of... dumb.  For example, take a look at the next three messages queued up on Lone Signal's site:


"A dog can't get struck by lightning. you know why? 'Cause he's too close to the ground. See, lightning strikes tall things. Now if they were giraffes out there in the field, now then..."

"I'm not all bad but I'm a faithful sinner, might get lost but I'll be home for dinner."

I mean, come on, people.  Do you really want humanity to be the subject of a documentary on an alien world called The Derpinoids of Dumbass-3?

And of course, this opens up another, darker possibility, which is that if we do succeed in contacting extraterrestrial life, the results might be unfortunate for us.  No less a scientific luminary than Stephen Hawking weighed in on the possibilities three years ago.


"To my mathematical brain, the numbers alone make thinking about aliens perfectly rational," Hawking said, in an interview with The Sunday Times in 2010.  "The real challenge is working out what aliens might actually be like.  We only have to look at ourselves to see how intelligent life might develop into something we wouldn't want to meet.  I imagine they might exist in massive ships, having used up all the resources from their home planet. Such advanced aliens would perhaps become nomads, looking to conquer and colonise whatever planets they can reach.  If aliens ever visit us, I think the outcome would be much as when Christopher Columbus first landed in America, which didn't turn out very well for the American Indians."

So, that's a little off-putting.

The other inevitable downside is the time it's going to take.  Even if Gliese 526 has intelligent life, that are capable of receiving and interpreting Lone Signal's message, and are already able to send a response more or less immediately, it will take 34 years before we get it.  By that time I'll be... well, I'll be old.  Let's leave it at that.  A conversation that has a 34-year lag time between messages would be kind of... difficult:

Them:  "Can't complain.  Sunny and warm here, just took the kids to the beach.  Little Billy got sand in all six of his eyes, can you imagine?  Kids, right?"

Now, it's not that I'm actually against what Lone Signal is trying to accomplish, but it does seem like it has some pretty significant pitfalls.  Be that as it may, I hope Jamie King succeeds in his wild scheme.  It would be cool if we humans would finally do something with our money other than designing bigger and better ways of torturing and killing each other.

So I encourage you to donate to Lone Signal, and also to log in and post a message.  It's nice to see that there are still a few people who have their hearts and minds turned toward the stars.

But if you do decide to send a message to the aliens of Gliese 526, try to come up with something better than "EELRIJUE," okay?
Posted by Gordon Bonnet at 2:56 AM