Welcoming in the witch doctors

Whenever I think that the battle over teaching creationism in the public schools can't get any more bizarre, it does.

The smarter anti-science types -- and I know that may sound like a bit of an oxymoron, so you'll just have to believe me that there is a spectrum -- are people like Michael Behe, who adopt a bait-and-switch technique to claim that because there are facets of evolutionary biology that haven't yet been explained, the whole thing is suspect.  These folks write massive tomes with names that seem to indicate that there's all of this doubt about the mechanisms of evolution, often invoking the name of Charles Darwin in the title, such as Darwin's Dilemma or Darwin's Confusion or Darwin Scratching His Head In Puzzlement or Darwin Sits There With A Dumb Look On His Face (Behe's contribution was Darwin's Black Box).  After stating that we still don't understand everything, as if this wasn't true of every scientific field, they just sit down and say, "Ha.  We win," despite the fact that scientists do understand most of these systems pretty well.  In that way, they're a little like Bill O'Reilly. 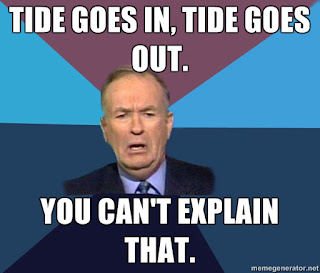 Of course, just saying "You don't know about that" never stops scientists; finding out about things they don't yet know is what science is.

Then, you have your Wendy Wright-style creationist.  Wright, you might know, is the former president of Concerned Women of America, who engaged in a "debate" with evolutionary biologist Richard Dawkins that caused many of us to repeatedly slam our heads into a wall.  Wright's technique was simply to stonewall.  It's the creationist version of "la-la-la-la-la, not listening."

Dawkins, I think, showed admirable restraint by not screaming "ARE YOU A MORON?  OR WHAT?" at her.

This week, however, we saw a new technique, which had the effect of silencing me entirely out of utter bafflement.

You have probably heard about the Louisiana Science Education Act, a piece of legislation that was passed in 2008 and which allows teachers to use "supplemental materials that challenge existing science" in their classrooms.  While it never explicitly mentions evolution, it is pretty clear to its opponents that this was the intent (with climate change being a secondary target).  Every year since its passage, there have been attempts to repeal it, with the most recent failing this month.  Governor Bobby Jindal, who signed the legislation into law, defended the LSEA as follows:

But even this -- the labeling of creationism and intelligent design as "the best science," as if this was actually what scientists think -- falls short of what happened in the Louisiana legislature last week.  In the hearings on the LSEA (which ultimately resulted in its being upheld), Senator Elbert Guillory (R-Opelousas) stated that we needed the LSEA in place so that science teachers could teach...

I couldn't make this up if I tried.  Here's the exact quote:


I'm concerned that we might shut off the presentation of ideas... by declaring one science, or another as pseudoscience...  I can tell you about my experience with a doctor, this doctor practiced in an open circle in a dusty spot, he wore no shoes, was semi-clothed, used a lot of bones that he threw around.  I bet that all of us would agree that his science is a pseudoscience, that we would not have respect for his science and the practice of his science.  That would concern me, because if we were able to declare what I have verified as something that has some validity to it, I mean, the stuff the man told me about my history... If I closed my mind when I saw this man in the dust throwing some bones on the ground, semi-clothed, if I had just closed him off, said, 'That's not science.  I'm not gonna see this doctor,' I would have shut off a very good experience for myself, and actually would not have known some things I needed to do when I got home to see my doctor.

Let me get this straight, Senator Guillory; you want the LSEA in place so that when I teach human physiology in my AP Biology class, I can say things like, "When someone is diagnosed with diabetes, it is critical that they receive insulin injections to bring their blood sugar back down.  Or else they could just throw around some bones, which should accomplish the same thing."

Now, I suspect that Senator Guillory was being disingenuous, here; it's pretty common to characterize the battle as "teach the controversy," as if there is a controversy about evolution outside of religious circles.  More than once I've heard proponents of creationism and ID argue that "all we want to do is teach students to think critically about science by presenting them with other viewpoints."  It may be that the whole witch doctor thing that Guillory was describing was a feint, a way to claim that the kerfuffle over science education was about open-mindedness (or multiculturalism) and not about religion.

On the other hand, maybe he's just a loon.  I dunno.

In any case, it illustrates something that I've commented upon before in this blog; these people are damn near impossible to argue with.  They always have a ready answer, even if that answer makes no sense whatsoever.

It reminds me of a quote -- variously attributed, but which seems to come originally from Christopher Hitchens -- that seems a fitting place to end.