Woo-woo ideas, like many things, are subject to fads.  There are a few things that seem to be "in" at the moment (conspiracy theories, mermaids, anti-vaxxer nonsense) and a few that are "out" (Ouija boards, Tarot cards, the Loch Ness Monster).  These fads create a positive feedback effect on the media, both on (supposed) non-fiction documentaries and on movies and television (in fact, a current discussion on the r/skeptic subreddit is, "Were alien hybrid theories popular before The X Files?").

Bigfoot is big now, and has been for quite some time.  This has led to sightings of our alleged hairy cousins, once confined to the Pacific Northwest, a swampy bit of Arkansas, and the Himalayas, coming in from just about everywhere -- there have been reports of Sasquatches (Sasquatchi?  Sasquatchim?  Surely there has to be a better plural) showing up in places as unlikely as heavily-populated southeastern England.  And more new ones come in daily, as other places jump on the bandwagon as having their own version of the world's most popular cryptid.

A recent extension of the range of proto-hominids was brought to my attention last week by a regular reader and frequent contributor to Skeptophilia, who sent me an article from Cuenca (Ecuador) High Life called "Another Monster Sighting in the Cajas Mountains: British Hikers and Guide Debating Whether to Release Photos."  In it, we hear about the rather amusingly named "Wawa Grande" -- which translated from Quechua and Spanish, respectively, means "big baby."  Wawas (Wawae?) apparently live exclusively in the high peaks of the Andes, which explains why they're so seldom seen, unless there's another explanation, such as that they don't exist.

Of course, that's not what Cuenca High Life would have you believe.  "A Quito television station reported three weeks ago that two British hikers and their tour guide spotted the elusive creature in Cajas National Park during a three-day trek," the article states.  "The trio claimed to have observed the over-sized humanoid animal for several minutes in a remote area of the park in early April."

We then get to hear from Sean Worthington, one of the hikers who made the report.  "I have no idea what it was other than to say it was quite large, with light colored fur and had human characteristics. It was able to stand on two legs but also came down on all fours," Worthington told reporters. "I am a scientist by training and not prone to make fanciful claims, but I cannot deny seeing the thing." 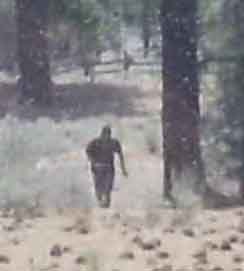 Apparently, like our own Bigfoots (Bigfeet?  Dammit) of North America, the "Wawa Grande" has been around in legend form for some time -- two hundred years, the article says.  It became more widely known in 1988 when a Scottish hiker, who is named (I am not making this up) Robert Burns, was "mauled by Wawas" when he took shelter in a cave while on a hike.

If I ever start an alternative rock band, I'm going to name it "Mauled By Wawas."

And of course, you can't have a cryptozoological claim without allegations of a coverup.  An unnamed "retired park service biologist" is quoted in the article as stating that the powers-that-be in Ecuador are engaging in a policy of denial.  "It does not exist," the biologist said, when asked about the official policy regarding the Wawa Grande.  "That is what we told anyone who asked about it.  There was a U.S. television show called Monster Quest that kept asking for help, but we refused.  We told them there was nothing up there and no reason to do a TV show." Nevertheless, the biologist said, he knows the Wawa exists -- because he's seen one.

The current popularity of Bigfoot probably explains why he's made his way not only onto shows like Monster Quest and Finding Bigfoot (which, thus far, has not lived up to its title), but onto commercials.  Jack Link's beef jerky, in particular, has made use of the hirsute hominins in its advertisements, using the tag line "Messin' With Sasquatch," in which humans play various practical jokes on Bigfoot (all the while eating beef jerky).  The practical jokes never end well, and in various iterations of the commercial, the jokers end up thrown through the air, having their cars and boats smashed, having their arms ripped off, and getting pissed on.

Despite the fact that the Sasquatch always gets the last laugh in the commercials, last week this series of ads was roundly criticized by a Canadian anti-bullying group as "promoting bullying."  Because, presumably, children who are dumb enough not to notice that the practical jokers in the commercials always get violently dismembered are also dumb enough not to know that Sasquatch doesn't, technically, exist.

So, anyway.  That's the latest on our furry family members, who are apparently damn near everywhere. 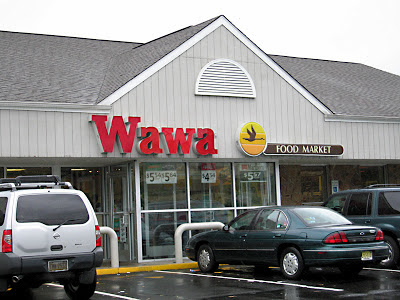 A coincidence?  I think not.  (And I have to point out for the record that this store is in Mahwah, New Jersey, making this the "Mahwah Wawa," which is fun to say.)