Many of you have undoubtedly been following the news of the horrific wildfires, last week in Colorado and this week in Arizona.  Thus far these fires have cost millions of dollars in damages and at least 21 lives, 19 of whom were members of an elite firefighting team who died this weekend in a blaze near Phoenix. 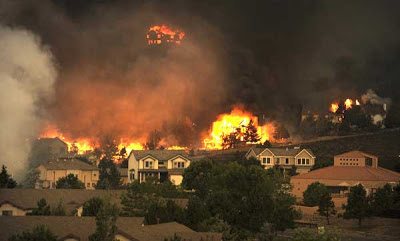 These fires are thought to have multiple causes.  The southwest saw record or near-record temperatures last week, coupled with low rainfall.  Some people also attribute the severity of the fires, especially in Colorado, to the population explosion of the pine bark beetle, which has killed huge stands of ponderosa pines all through the Rocky Mountains.  But in so attributing the fires to these reasons, people are ignoring the role of the most powerful natural-disaster-creating force known to man:

Yes, gays.  According to Colorado pastors Kevin Swanson and Dave Buehner, the recent fires are god's wrath against the people of Colorado for their liberal attitudes toward homosexuality.

In an interview on Generations Radio, the two ministers were clearly in agreement about what was going on here.  Said Buehner, "Why Colorado Springs?  Understand that Colorado itself is a state that is begging for God's judgment.  How did we do that?...  Our legislative session opened up this year and their very first order of business, their most pressing order of business..."  Swanson then interrupted with, "... they could hardly wait, they could hardly wait..."  And Buehner finished, "Like the first day, was to pass a Civil Union Bill, which is an uncivil bill."

And, of course, the whole thing wouldn't be complete without some mention of gay guys kissing, in this case State Senate Majority Leader Mark Ferrendino kissing his partner when they found out that the Civil Union Bill had passed, a photograph of which appeared on the front page of the Denver Post.  Said Swanson:

Delivered right to His Almighty Doorstep, I'm sure.

Then, the question came up as to why, if god was trying to smite Colorado for supporting gays, the fires hit the religious and conservative areas near Colorado Springs, rather than far more liberal bastions of Denver or Boulder.  Buehner said, "Judgment begins in the House of God," as if that made complete sense, and added that the fact that god hadn't yet destroyed the entire state was an "act of grace."

What strikes me about all of this is that god, for all of his supposedly omnipotent smiting power, so often chooses to smite parts of the world with disasters that they pretty much already had happening beforehand.  He sends earthquakes to places that are on fault lines and near subduction zones, hurricanes to the Gulf Coast and US Atlantic Seaboard, tornadoes to the American midwest, and catastrophic forest fires to the southwestern United States and the arid parts of southern Europe.  Funny thing, that.  If I didn't know better, I would think that this meant that these events are purely... natural.

The other thing that crosses my mind, here, is that if gays really are behind all of this, maybe they should flex their muscles a little.  Hey, if you have this kind of power, why not enjoy it, especially since god's aim seems to be a bit off?  You guys could be the next generation of Mad Scientists -- but instead of rubbing your hands together and cackling maniacally before firing up your Laser Cannons, all you do is stand around and kiss, and god smites, say, Omaha.

It'd be even better if you could figure out how to target this force a little better.  Wouldn't it be cool if, for example, you could kiss and have god send a tornado to destroy the Westboro Baptist Church?  If I thought that would happen, I would happily kiss a guy, and I'm not even gay.

So anyhow, that's today's news from the Wacko Fringe Religion Department.  As I've pointed out before, however crazy this stuff sounds to nonbelievers -- and even, I hope, to most sensible Christians -- it really is completely consistent with the behavior of god as laid out in the Old Testament.  So these guys, however they seem like they're in dire need of jackets with extra long sleeves, are actually just preaching what the Holy Book says.

I'm not saying it's sensible, mind you.  I still think the folks who believe this stuff are crazy as bedbugs.  All I'm saying is that it's consistent.

Anyhow, I guess I'll wind things up here.  It's time for me to go take a shower and get dressed, which will offer me several more opportunities to break some Old Testament rules.  Maybe if I wear a shirt woven from two different kinds of thread (such an important rule that it was mentioned twice, Leviticus 19:19 and Deuteronomy 22:11) then god will smite Ann Coulter.