As I have mentioned before, my commitment to a rationalist approach is not because I think that odd explanations are impossible.  Ockham's Razor, after all, is a rule of thumb, not an unbreakable law.  Sometimes nature is weird and messy; sometimes it is counterintuitive; sometimes the convoluted explanation turns out to be correct.

Still, it's frustrating to see the ease with which some people jump to a bizarre conclusion.  Witness the contention, currently making the round of social media such as Facebook, that you should have your blood type checked and do a little standard genetic analysis, because you may have an "impossible blood type" -- one that is impossible, given the blood types of your parents.

Which means that you were actually sired by an alien from another planet.

Okay, let's just step back from this claim for a moment.

First, here's a short statistical genetics lesson to refresh the basics with folks who may not remember high school biology too well.

Let's say we have a couple who has just conceived a baby.  The man is AB- and the woman O-.  The ABO antigen group and the Rh (negative or positive) antigen inherit independently, so we can consider them separately.  The fact that the man is AB and the woman O means that, given Mendel's Law of Inheritance, the baby will have gotten one allele from each parent.  The dad can pass on an A or a B (but not both); the mom can only pass on an O (O is recessive, so she has two copies of the O allele).  The baby therefore could have a blood type of A or B, and in fact has a 50% likelihood of one versus the other.  As the Rh negative allele is recessive, we know each parent has two copies of the Rh negative allele; the baby can only be Rh negative him (or her) self.  Thus, the baby could be A- or B-; all other blood types are impossible. 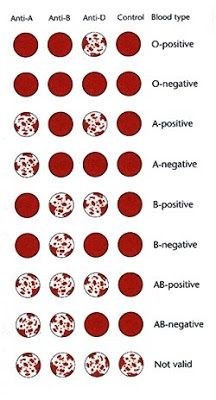 Recently, though, we have a claim spinning its way around the internet that there are folks out there who do have "impossible blood types" -- children with blood types that could not occur, according to standard statistical genetics, from the pair of parents who produced them.  And these children, the claim says, are the results of aliens abducting, and then impregnating, human women.

And my response is:  Really?

There are two much better explanations as to why a child may have an "impossible blood type" (or any other "impossible" combination of genetic traits) than assuming that the mother of the child was beamed up to a waiting spaceship to engage in some hot human/alien sex.

The first is that there is a perfectly natural, albeit rather peculiar, genetic explanation for the odd result.  I know of two genetic conditions that result in abnormal blood type inheritance -- Bombay syndrome (in which another gene "cancels" the blood type the child inherited, causing an aberrant type O) and cis-AB (in which because of an improper crossover event, the child inherits both the A and the B antigen from the same parent -- so the child is an AB regardless of what the other parent contributed).  Both of these conditions are rather rare, but each certainly gives a natural explanation for the odd results in the claim.

The other explanation is even more likely, but is one I hesitate to bring up -- and that is that the child might not be the biological offspring of that father.  Euphemistically-named "non-paternity events" -- cases where a child is not the biological offspring of the man who thinks he sired it -- are more common than you'd think.  Genetic testing in America, Canada, and western Europe give amazingly consistent results, averaging 1% of the children tested being the result of extramarital sex -- and that's excluding children who are adopted or who are known to be the product of a previous relationship.

So one child out of a hundred isn't the genetic offspring of the man who claims to have done the deed.  No aliens necessary, although an explanation from the mother may be.

So, anyhow, it's not that I think that aliens are impossible.  It's not even that I think that it's impossible that they've visited the Earth, although I do think it's unlikely.  Even more unlikely is that the aliens are so out-of-control horny that the first thing they do upon arrival is to look around for some human women to hook up with.  So as an explanation of why some children have unexpected blood types, it kind of sucks.  Why the people who made this claim -- and those who are now forwarding it endlessly around the internet -- think this makes better sense than some perfectly natural explanation, such as a genetic aberration or the baby being sired by the mailman -- makes no sense to me at all.  Unless, perhaps, these people would fancy having an illicit liaison with Mr. Spock themselves, and think that if they wish upon a star, their dream will come true.
Posted by Gordon Bonnet at 4:15 AM