It's in the palm of your hand

Amongst the downsides of being superstitious is that sometimes, you find out you're in for some bad luck.

A girl I went to college with had a real thing for Tarot cards.  And even considering the generally vague, this-could-apply-to-anyone interpretations of most Tarot card spreads, there are a couple of cards that are unequivocally bad.  The Nine of Swords, for example, isn't good news, which you could probably tell just by looking at it: 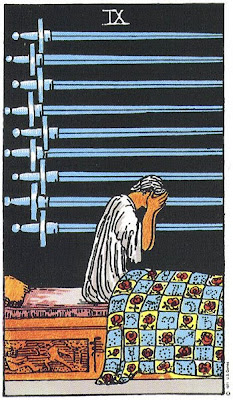 So, just by the laws of chance (not that true believers think that's what's going on here, but still) -- every once in a while, you're going to get a bad spread of cards laid out in front of you by your friendly neighborhood fortuneteller.  And what did my college friend do, when it happened to her?

She picked up all of the cards, shuffled them, and laid them out again, until she got one she liked.

It's a more common response than you'd think.  Numerologists -- people who believe that everything can be converted to numbers, and those numbers control your future -- have been known to go through a legal name change if their names don't add up to a "good number."

Something similar is going on right now in Japan, where palmistry is all the rage.  You know: the idea that the lines on your palm somehow tell you how long you'll live, whether you'll become wealthy, whether you'll fall in love, and so on.  Now, palm lines aren't going to be so simple to change -- it's not as easy as changing your name, or picking up the cards if you don't like what you see.  So, what do you do if your life-line is short, if your heart line says you'll never find a nice person of whatever gender you favor, and so on?

You have them surgically altered.

I'm not making this up.  Surgeons in Japan are now being asked, with increasing frequency, to use an electric scalpel to burn lines in patients' palms to engrave a pattern that is thought to be lucky.  The surgery costs about a thousand bucks, which of course isn't covered by insurance.

Small price to pay, say true believers, if the outcome will bring money, love, long life, or whatever it is you're after.

"If you try to create a palm line with a laser, it heals, and it won’t leave a clear mark," said Dr. Takaaki Matsuoka, who has already performed five of these surgeries this year, and has another three scheduled soon.  "You have to use the electric scalpel and make a shaky incision on purpose, because palm lines are never completely straight.  If you don’t burn the skin and just use a plain scalpel, the lines don’t form.  It’s not a difficult surgery, but it has to be done right." 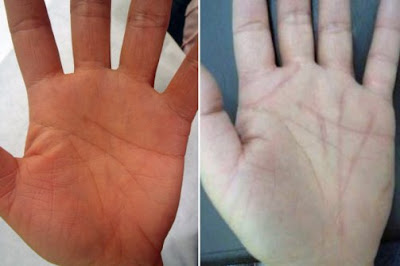 Before and after.  Can't you just feel the luck radiating from the right-hand photograph?


Matsuoka seems like a believer himself, and not just an opportunist making a quick bunch of yen from the gullible.

"Well, if you’re a single guy trying to pick up a date, knowing palm reading is probably good. It’s a great excuse to hold a lovely woman’s hands," he said, in an interview.  "Men usually wish to change their business related success lines, such as the fate line, the money-luck line, and the financial line.  The money-luck line is for making profits. And the financial line is the one that allows you to save what you make.  It’s good to have both.  Because sometimes people make a lot of money, but they quickly lose it as well.  A strong fate line helps ensure you make money and keep it.  These three lines, when they come together just right, create the emperor’s line.  Most men want this."

As for women, Matsuoka says they mostly want to change the lines related to romance and marriage.

How could all of this work?  Matsuoka hedges a little on this question:

"If people think they’ll be lucky, sometimes they become lucky," he said, which makes him sound a little like the Japanese answer to Norman Vincent Peale.  "And it’s not like the palm lines are really written in stone—they’re basically wrinkles.  They do change with time.  Even the way you use your hands can change the lines.  Some palmisters will even suggest that their clients draw the lines on their hands to change their luck.  And this was before palm plastic surgery existed. However, anecdotally I’ve had some success."

I can't help but think that if any of these superstitious beliefs actually worked, they wouldn't work this way.  If Tarot cards, numbers, or lines on your palm -- or any of the other wacky suggestions you might have heard -- really do control our destiny, then just changing them to a pattern you like is kind of... cheating, isn't it?  You'd think that the mystical powers-that-be wouldn't let that happen.  If I were one of the mystical powers-that-be, I'd be pissed.  I'd probably trip you while you were carrying a full cup of hot coffee.

That'd sure show you.

Of course, a simpler explanation is that all of this is really just unscientific bullshit.  To test that conjecture, I may just break a mirror on purpose today, and cross the path of a black cat (easy for me because I own two).  Go ahead, Gods of Bad Luck, do your worst.  I'm guessing that I'll still make it all the way through the day without having a brain aneurysm.

And in any case, no one is getting close to my hands with an electric scalpel.  That has gotta hurt.
Posted by Gordon Bonnet at 4:44 AM