It's been a month of mixed news in the psychic world.  First, we had news that the Texas psychic who said that there was a mass grave on property belonging to a couple in Liberty County (and "bones in the house and messages written on the wall in blood") had to pay the couple $6.8 million in damages for defamation.  But it doesn't always work out that way; only a few days later, we heard that "Britain's favorite medium," Psychic Sally Morgan, had won a $193,000 award in her lawsuit against The Daily Mail after a reporter claimed that she had tricked an Irish audience by getting information from an accomplice through an earpiece.

But neither of the judgments should have been a surprise to the psychics, right?  Of course right.

Be that as it may, the psychics may be feeling a little beleaguered, of late.  At least, that's the impression I get from Ron Bard, who calls himself "The King of Psychics," who has been trying desperately to save either Japan or his reputation, depending on which version of the story you go for.

Bard, who is US-born but who has lived in Japan for some years, recently made a prediction that the country was going to be struck by a major disaster "some time before the end of 2013."  He had a press conference about it, where he told a reporter that everyone had better listen to him, for death awaits, with big, nasty, pointy teeth. 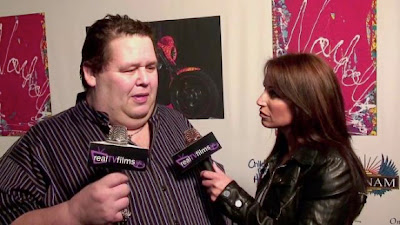 And the overall reaction he got was:

Well, naturally, you don't get to be the King of Psychics if you're willing to take something like that lying down.  So he naturally turned to the most convincing medium for disseminating vital information, used by everyone from the Pope on down: Twitter.

Here is the series of Tweets Bard wrote (translation courtesy of Yoko Fujimoto):


To everyone in Japan, once again, hello. I have some important messages to convey to you today in Japanese.

Last night, I was able to see into the future of Japan. I’d like to share those visions with you.

In two or three months, Japan is going to experience a natural disaster.

My message is very important. Everyone, please retweet this so that many people in Japan will know. In particular, tell your family, friends and loved ones. Please tell as many people as possible to follow me on Twitter.

This is not a joke. If you are not going to believe this message, please go ahead and stop reading now.

But if you would like to keep your loved ones and many other safe, pass my message on to as many people as possible. Or have them follow me on Twitter.

For the next couple of months, please read my tweets carefully. As the day of the disaster gets closer, I will be able to say which parts of Japan are most at risk.

As you all know, I predicted the March 11 disaster. Around the summer of 2010, it began to become clear to me. That prediction was published in the Tokyo Sports Shimbun, but it appears few people took notice of it. That’s why I want to stress the importance of my message this time.

If you want to protect your family and friends and others around you, please take my tweets seriously. And encourage people to follow me on Twitter. In this way, many people’s lives might be saved.

I was raised in Christianity and Judaism, but now I believe that Japan is the source of all the world’s religions. Everyone, please pray together with me for the safety of the people of Japan. If you pray with me, perhaps we will be able to save your family, friends and loved ones.

Well, that convinces me.  Especially since if you look carefully at his claim to have "predicted the March 11 disaster" (the day of the horrific earthquake and tsunami in 2011), his actual prediction on March 8 reads, and I quote, "Before Japan reaches a major turning point, it is going to experience a great difficulty."

I'm sorry, Mr. Bard, could you be a little more vague?  Because I almost felt like I had to take action, there.

So it's not like he's exactly known for giving details.  If on March 8, he had said, "The spirits have told me that it's time to shut down the Fukushima Nuclear Reactor, because it's about to be hit by a bigass wave," I might pay a little more attention.

What's funniest about all of this is his last tweet, about how if we all pray together maybe the disaster won't happen after all.  So this makes his message sum up as follows:

2)  A horrifying disaster will hit Japan in the next few months, so you need to be prepared.

4)  Except maybe the disaster won't happen if you pray a lot.

6)  So don't blame me if you don't listen and end up getting yourself killed.

Myself, I find the increasing desperation of the psychics, mediums, and other woo-woo con artists to be a good thing.  Maybe it means that finally, finally people aren't listening to them any more, and have realized that what they really excel at are two things: (1) on-stage drama; and (2) making shit up.  And I don't know about you, but I'm not paying good money for that kind of thing.  If I had my way, they'd be playing to empty rooms.