See the violence inherent in the system!

Yesterday I ran across an article on the bizarre website The Mind Unleashed that is mostly interesting for what it says about scientists.

Called "Suppressed Scientific Evidence Proves Free Energy Source Dating Back 25,000 Years," the majority of the article is just the usual tired old claptrap about pyramids concentrating Quantum Wave Frequency Vibration Oscillation Resonance Energies, or something like that.  As usual, it's hard to tell exactly what they are saying, because rigorous analysis is something woo-woos avoid like the plague.  We're not given any actual evidence, of course; we're just treated to passages like this one:


[Author Phillip Coppens said,] “The pyramids are proof that our ancestors knew and worked with an energy technology that we are now finally able to measure, but are still short of fully understanding.” Coppens along with Klaus Dona of Austria and dozens of speakers attended the International Conference Bosnia Pyramid in Sarajevo, Bosnia-Herzegovina which is held annually to release findings to the public.

[Archaeologist Dr. Sam] Osmanagich has had a host of experts in various fields come to see his Bosnian pyramids, and measure anomalies associated with them. They have included the noted British scientist and inventor Harry Oldfield, who used a special camera system to photograph alleged electromagnetic (EM) waves in the vicinity of Visocica Hill.

So there's nothing really new here in terms of actual data.  But what caught my attention was the way the author claimed that scientists are suppressing this information, out of some sort of misplaced loyalty to the status quo:


Overwhelming evidence, supported by scientific research from all over the archaeological community proves that our recorded history is wrong concerning turn changes [sic] religion, science and academics... Prominent archaeologists have attempted smear campaigns on Dr. Osmanagich’s work out of fear of how the impact of his discoveries will make on their own work...

Is it possible that the fossil fuel based energy system we now rely on could have been prevented if inventor Nikola Tesla’s work on free energy hadn’t been suppressed? Why did the FBI seize his papers upon his death? Tesla’s (1856-1943) patented free energy methods were rejected due to their inability to be metered and monetized. “We urgently need to change our mistaken point of view that our ancestors were stupid and accept that they had an advanced understanding of the fabric of nature and the universe, just like Nikola Tesla, whose ideas were suppressed as they did not and do not fit in the reigning model,” states Phillip Coppens, author and investigative journalist.

My first thought upon reading this was: do you know any actual scientists?  Because it sure as hell sounds like you've never met one.

Let's consider the following scenario.  A physicist, working in a lab, runs an experiment and finds that her data seems to indicate that there are exceptions to the First and Second Laws of Thermodynamics -- that you can, in fact, create energy from nothing.  Such a finding, if verified, would overturn all of physics as we know it.  So said physicist shows a few of her colleagues, the experiment is repeated, and lo and behold, it seems to be true.  What does she do?


1)  She writes a paper on it, urging other physicists to test her results and see if it can be explained.

2)  She doesn't tell anyone, because the Laws of Thermodynamics are laws, dammit.  You get in serious trouble for breaking laws.  Besides, we can't have any challenges to the pre-existing paradigm!  This is science!

I hope the answer is obvious.  If there really was evidence that any of the hitherto-accepted laws of physics were wrong, scientists would be trampling each other to death trying to get to the grant money first.  Doing groundbreaking research is how careers are made.  It's how Nobel Prizes are won.  The idea that scientists would avoid doing something edgy because they love the theories they already have is ridiculous.

Consider what happened when the scientists at CERN found what appeared to be a neutrino traveling faster than the speed of light.  Did they suppress the evidence, because (after all) you can't challenge Einstein?  Of course not.  They wrote a paper, issued a press release, and asked all of the qualified physicists in the world to try to explain the data.  As it turned out, the analysis seems to support a flaw in the data.  Einstein was vindicated again, not because anyone was engaged in a repressive campaign of Silence the Dissenters, but because the original analysis was wrong. 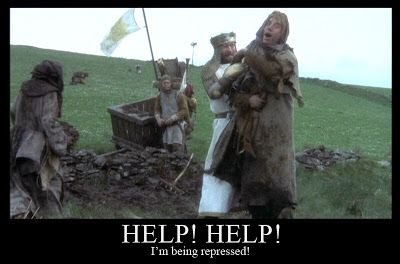 That's the problem here, isn't it?  There's no actual evidence that "Free Energy" exists (at least not in the sense that these people mean; "free energy," lower case, is a real scientific term, but it doesn't mean the something-for-nothing nonsense that the woo-woos are so fond of).  Throwing around Nikola Tesla's name isn't going to make these claims correct.  It's much easier to rant about a hidebound and oppressive scientific establishment than it is to do any actual science.  And as for the scientists who are criticizing the work of people like Sam Osmanagich as unscientific, hand-waving, poorly-executed rubbish, I'm sorry -- they're simply right.

Having your ideas criticized does not mean you're being repressed.  That's how science works.  And as for the researchers mentioned in this article, who claim that no one believes them -- if you can't deal with being challenged, with being asked for hard evidence for your claims, you're probably in the wrong field.
Posted by Gordon Bonnet at 4:31 AM